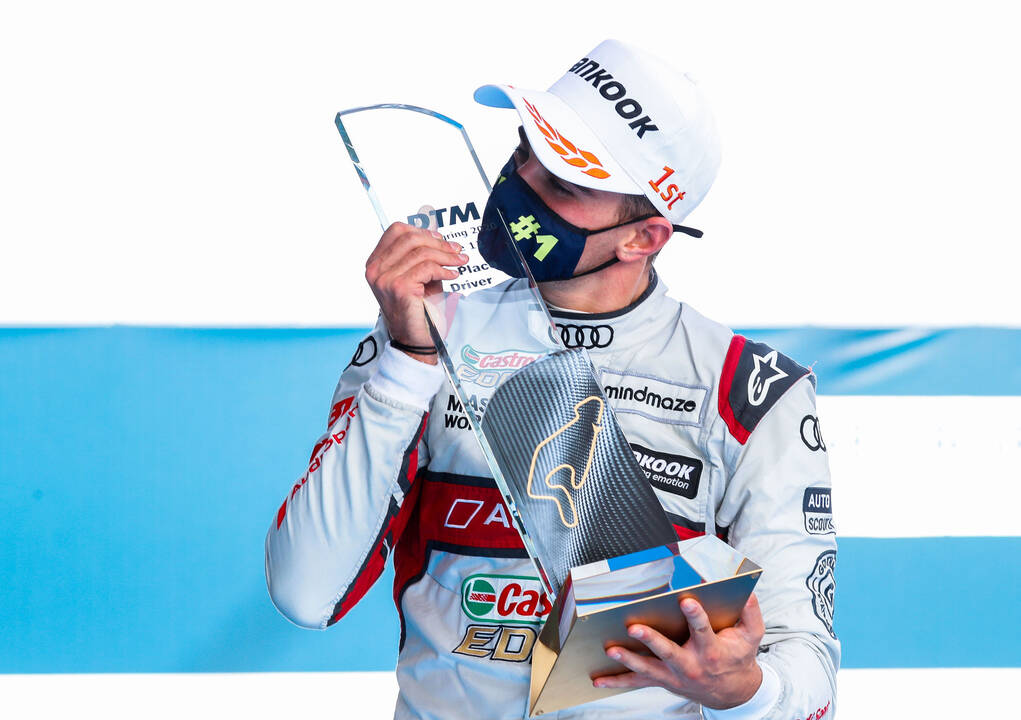 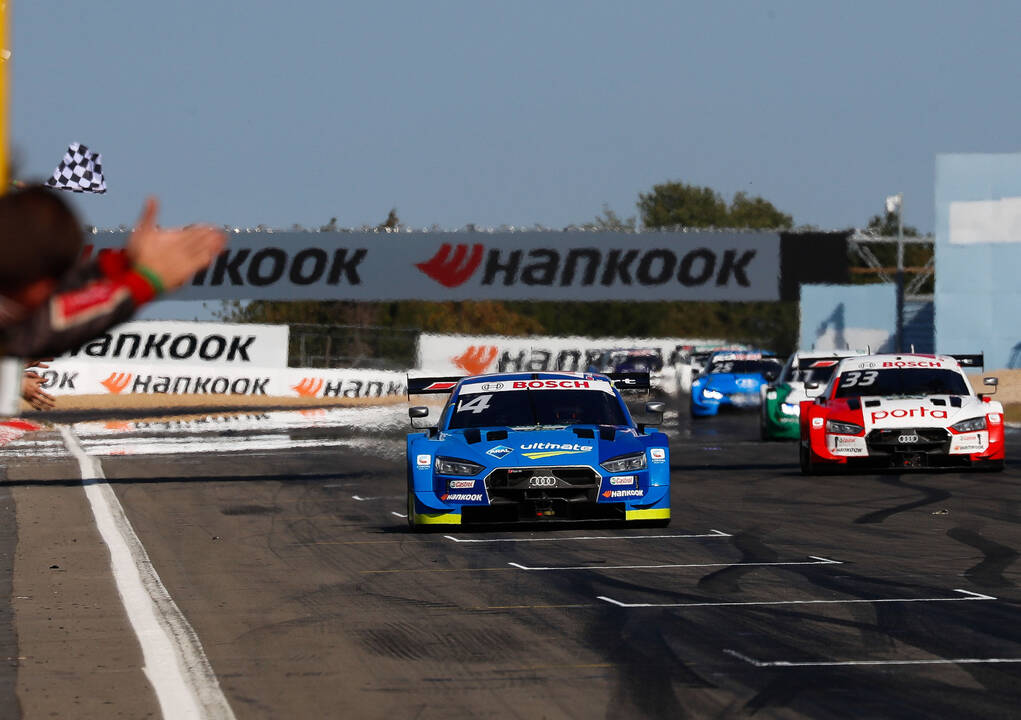 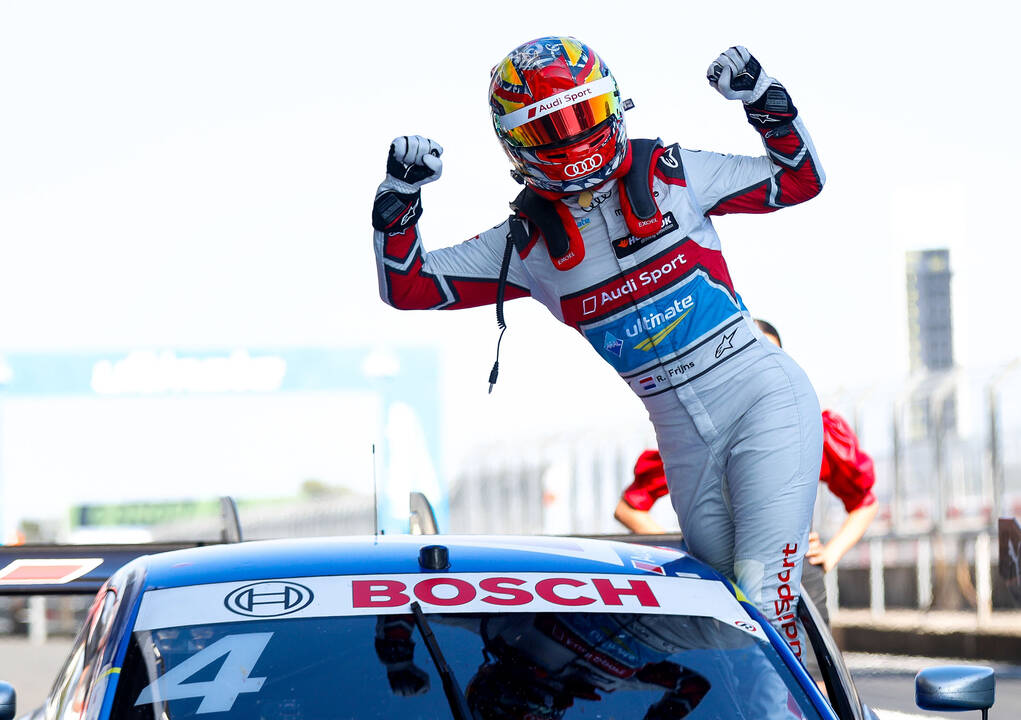 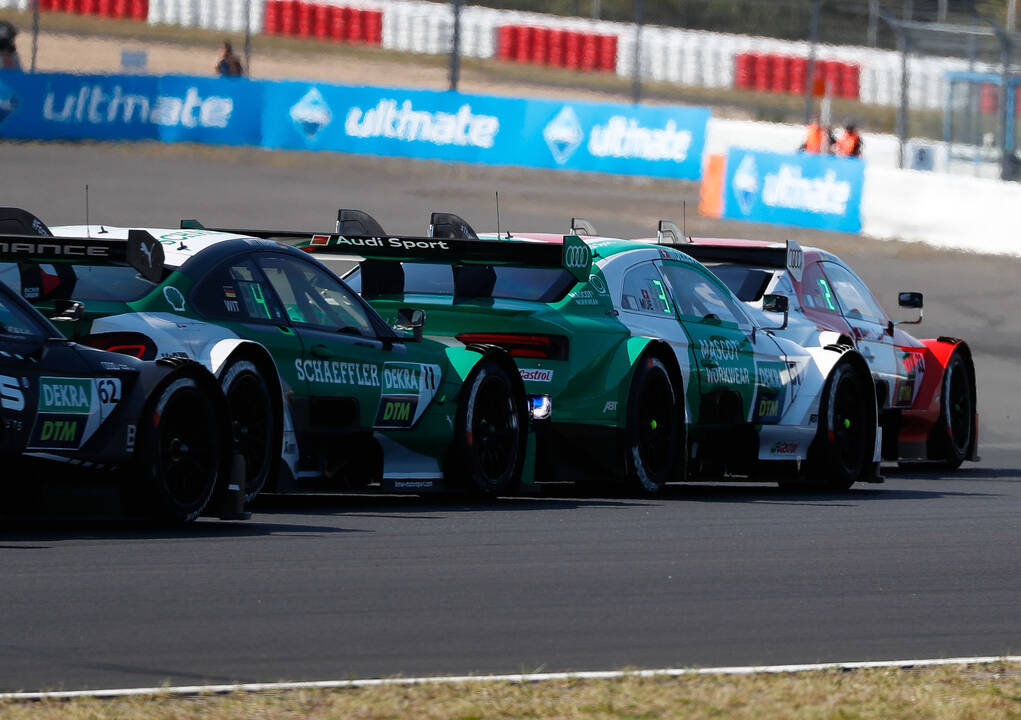 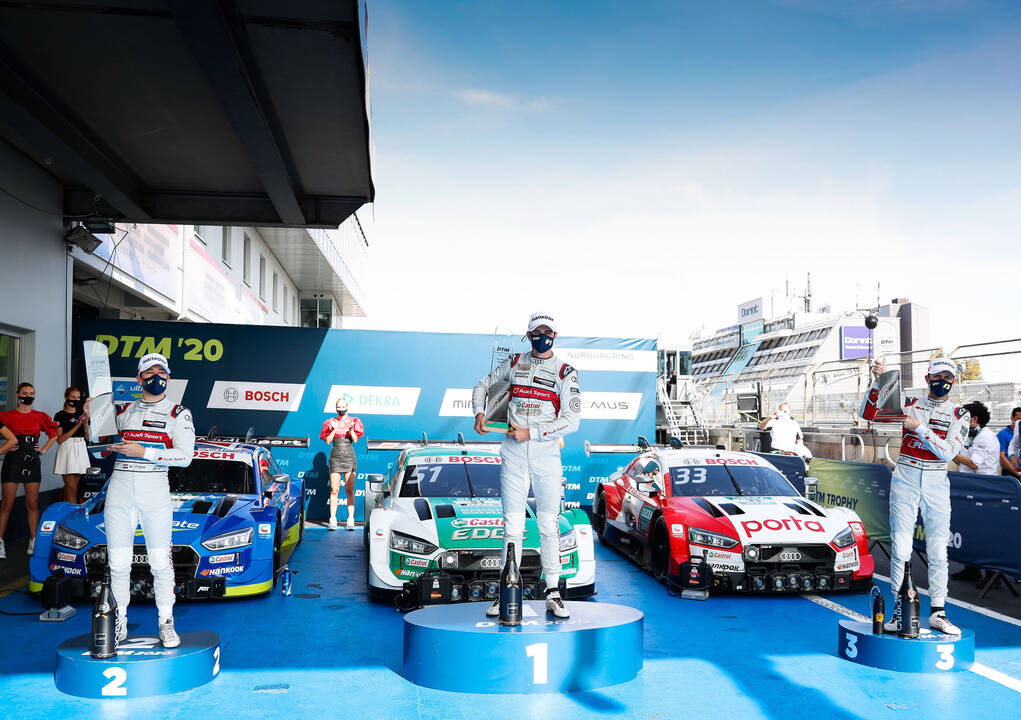 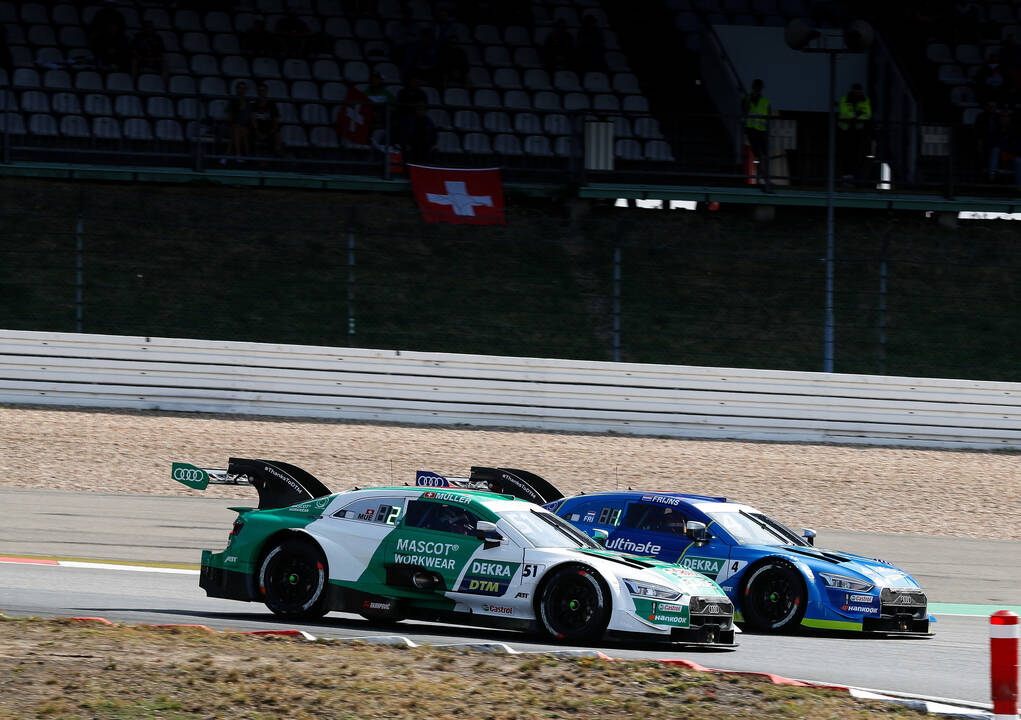 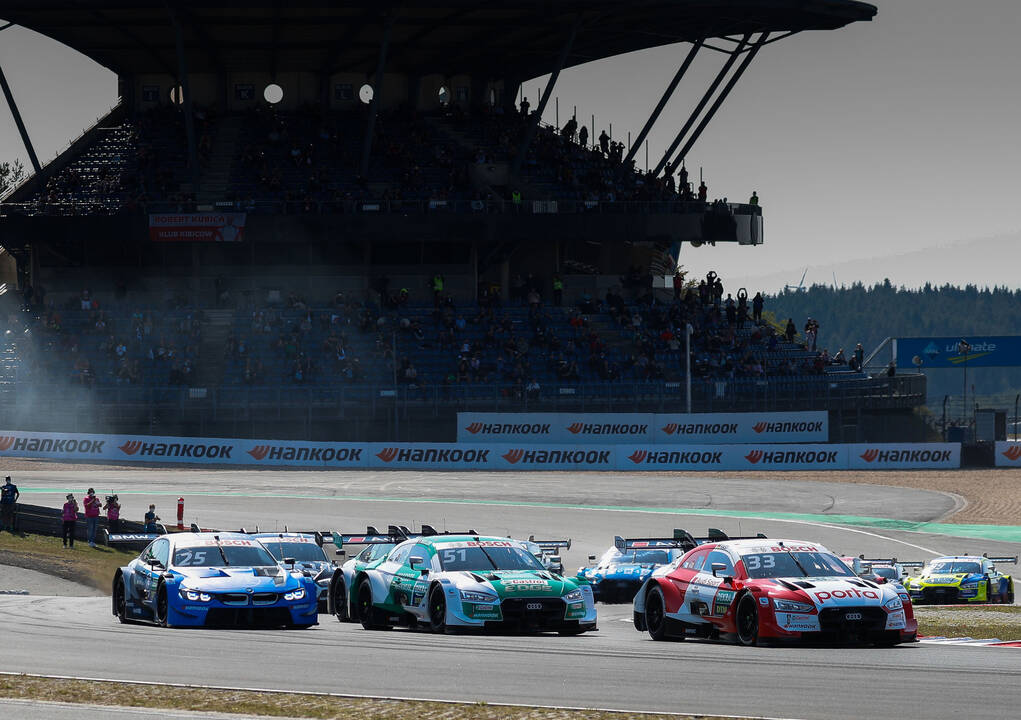 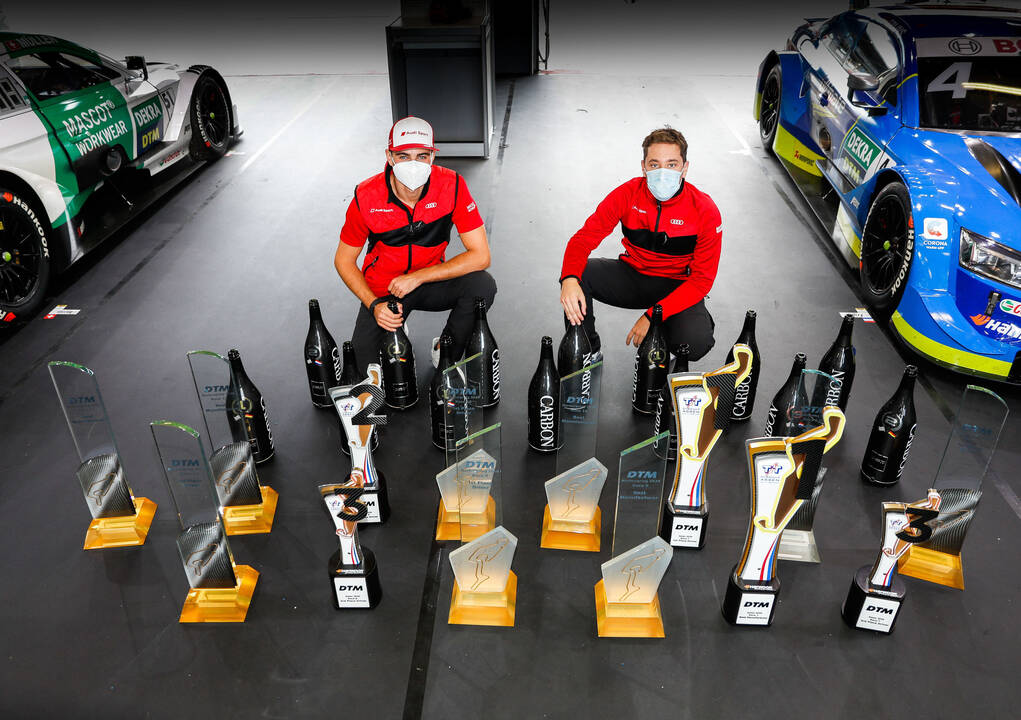 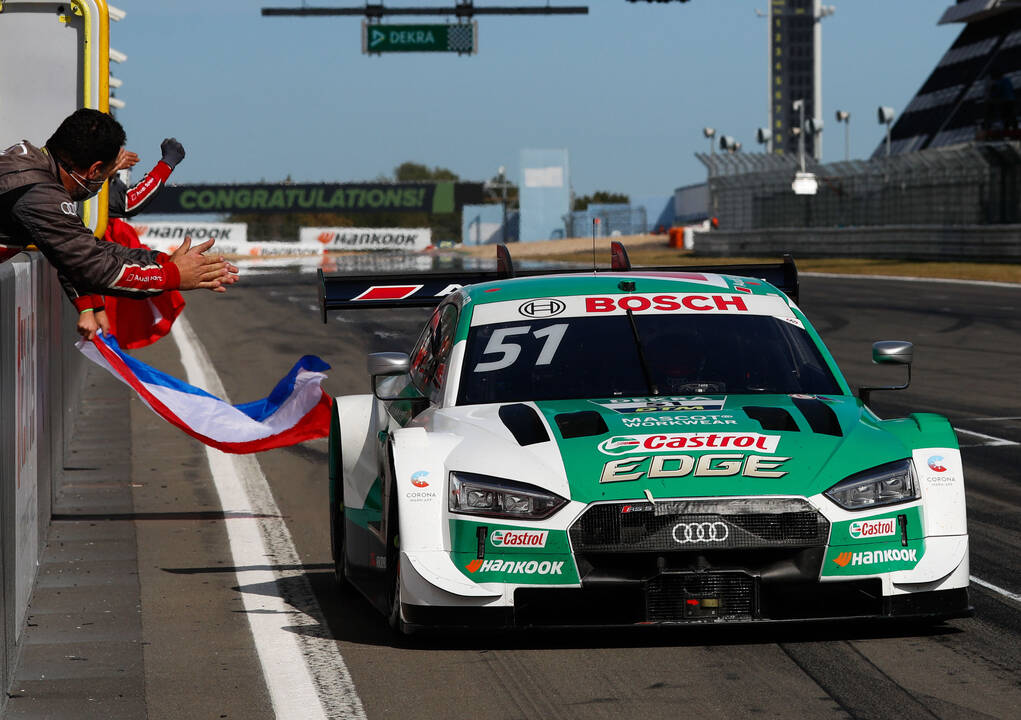 Second victory in a row for Robin Frijns on Saturday.The “Flying Dutchman” clinched an extremely rare lights-to-flag victory in the DTM, even though his lead was wiped out three times by the safety car. On Sunday, both drivers from Audi Sport Team Abt Sportsline, Müller and Frijns, shone with a double victory.

“It was pretty nerve-racking in the car today,” said Frijns after his narrow victory ahead of title defender René Rast from Audi Sport Team Rosberg. “Every time I had built up a lead, the safety car came out. When René was directly behind me for the final laps and was able to use Push-to-Pass and DRS all the time, I knew that I couldn’t afford the slightest mistake. My car was great and the key to victory today was my good start.”

From second place on the grid, Frijns won the battle against René Rast, who had secured pole position with an impressive lap in the morning. “The start was decisive,” confirmed the two-time DTM champion. “On Friday, we had a technical problem in the first free practice session and even after the second practice session I was unable to practice a start. Today was my first real start and it was not a good one.”

At times, Rast even dropped back to third place behind BMW driver Marco Wittmann, but then recovered his second place at the last restart and then started chasing the leader in the final stages of the race. “I didn’t want to overtake Robin before the last lap, but maybe I attacked a little bit too late,” said Rast. “It was a very difficult race. A second place is not my goal, but still a good result.”

Rast’s slow start also had an indirect effect on championship leader Nico Müller. “I was stuck behind René, who seemed to have zero grip, so two BMWs overtook me in the first few corners,” said the Swiss. After the first restart, it got even worse for him: “I was squeezed between two cars, was hit from behind and got turned around.” From last place, Müller fought his way up to fifth with an early pit stop and by far the fastest lap of the race, thus defending first place in the drivers’ championship. However, his lead shrank to 13 points. “That’s a bit frustrating, because we definitely had more in the bag today,” said Müller.

“Wow, what a race!” said Head of Audi Motorsport Dieter Gass. “Robin was outstanding today. He didn’t have a single Push-to-Pass or DRS and still managed to stay in front. That was an extremely strong performance and he also made zero mistakes with all the safety cars and restarts. Fantastic! With second place, René made it a perfect 1-2 victory for Audi. That Nico managed to finish fifth, after being turned around, was mega.”

The twelfth race of the season was dominated by the three title contenders: Nico Müller, Robin Frijns (both from Audi Sport Team Abt Sportsline) and René Rast (Audi Sport Team Rosberg). Frijns managed a perfect lap in qualifying. “Achieving the fastest time in all three sectors is something that only rarely happens in the DTM,” said the Dutchman after his fifth pole position – the 19th consecutive one for Audi. “The lap also felt really good in the car.”

In the race, however, the winner of Saturday’s race was only able to hold on to his teammate Nico Müller for six laps. “Nico was simply a bit faster. It wouldn’t have made any sense for me to fight with him. Sometimes, it’s smarter to bring home a second place. This was the maximum I could achieve today.”

Nico Müller made up one place at the start and used DRS and Push-to-Pass on lap seven to overtake his teammate. Afterwards, he continued to pull away at the front. At the finish, the Swiss had an 11.790-second lead over Robin Frijns and 19.526 seconds over René Rast.

“This victory was very important today,” said Müller after his fifth win of the season. “I had a lot of bad luck on the last two race days. To come back in this way feels good. I’m especially happy for the whole team, who worked until the early hours of the morning to prepare a perfect car for me again. Robin’s team also helped, because the damage after yesterday’s race was quite substantial. To win with this car today, in such a dominant way is great. Thanks to the ABT team and also to Audi for this great car.”

With two wins each for Nico Müller and Robin Frijns, Audi Sport Team Abt Sportsline remained unbeaten on both Nürburgring weekends. “ABT is simply one step ahead of us at the moment,” said René Rast. “Yesterday, we were quite fast in the race. Today, I had to fight more again, especially with the second set of tires. I am satisfied with my own performance: I didn’t make a mistake and never gave up, but all in all, we can’t be happy, of course. We have to continue to work hard and catch up. The championship is not decided yet.”

“Today, we’ve again seen a very strong Audi performance,” said Head of Audi Motorsport Dieter Gass. “Nico had some bad luck in the last two races. That he has been able to come back like this is fantastic, and I’m happy for him. It’s also great that we secured two of the three championship titles so early on. We started to give our all again in the final year with the Audi RS 5 DTM. The results speak for themselves. That is pure ‘Vorsprung durch Technik.’ I would like to thank the entire team and the employees in Ingolstadt, Neuburg and Neckarsulm for again putting so much effort into this last season with the Class 1 cars. After three tough race weekends in a row, everyone deserves a little break now before the final spurt.”

Before the last six races at Zolder and Hockenheim, Nico Müller leads the drivers’ championship with 242 points ahead of Robin Frijns (224) and René Rast (195). In the teams’ classification, Audi Sport Team Abt Sportsline is clearly in first place. The score between Audi and BMW in the manufacturers’ championship is 827:356 on points and 10:2 on wins.