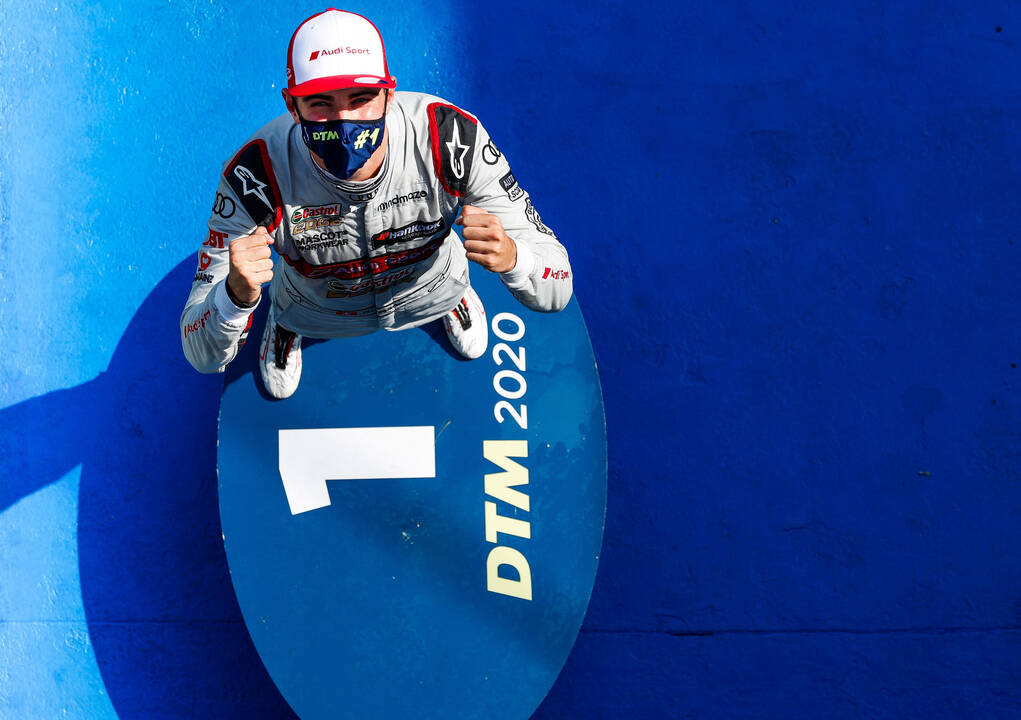 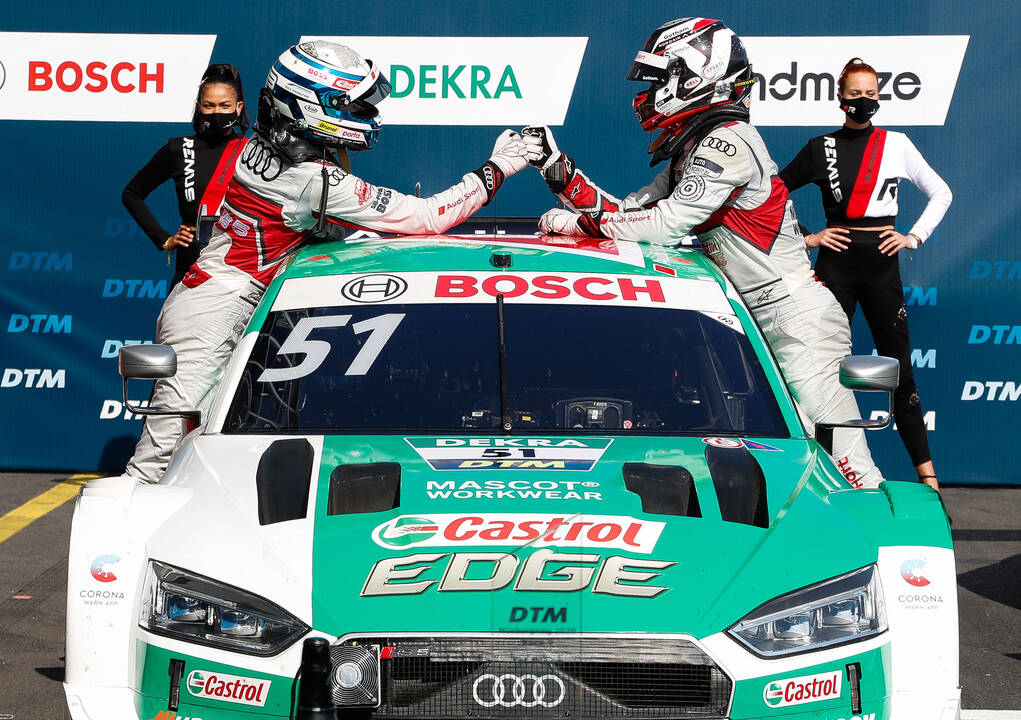 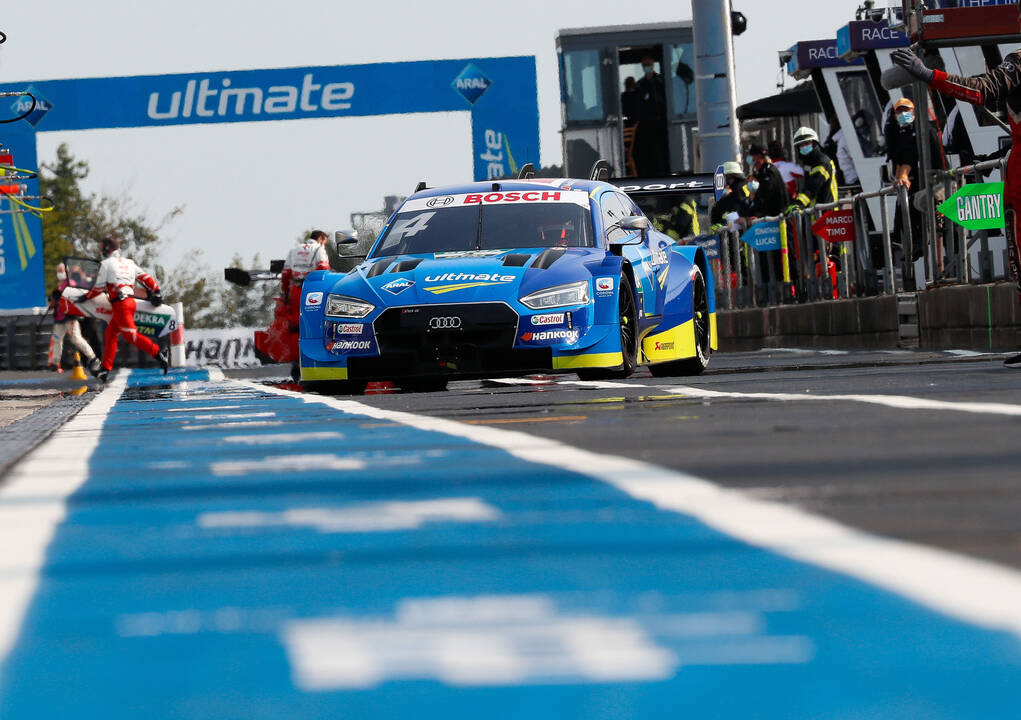 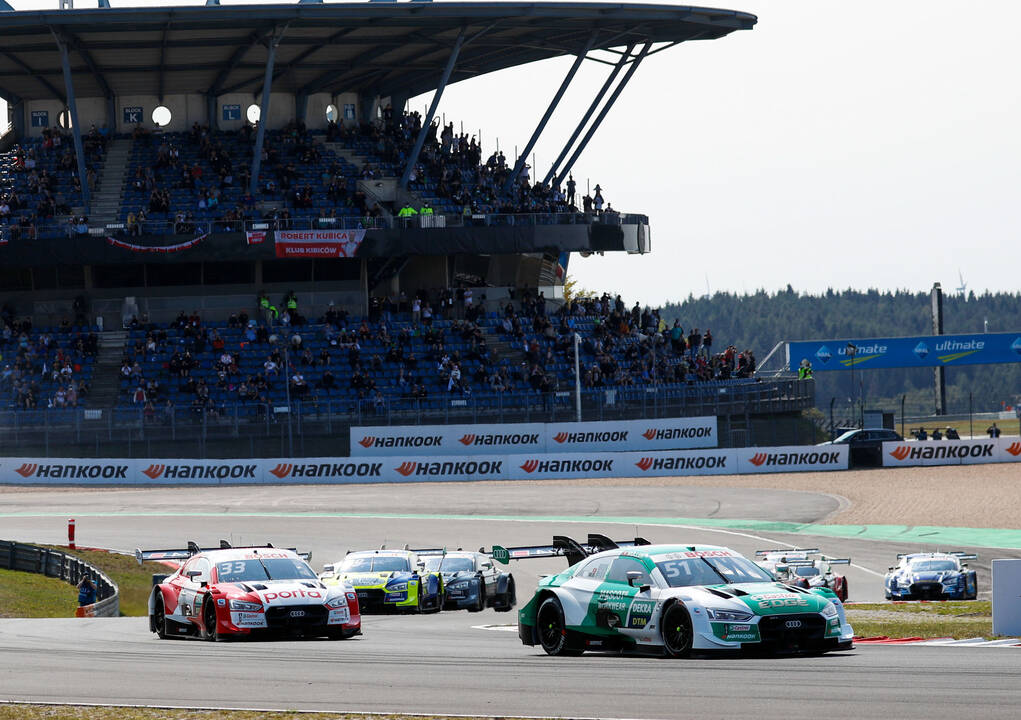 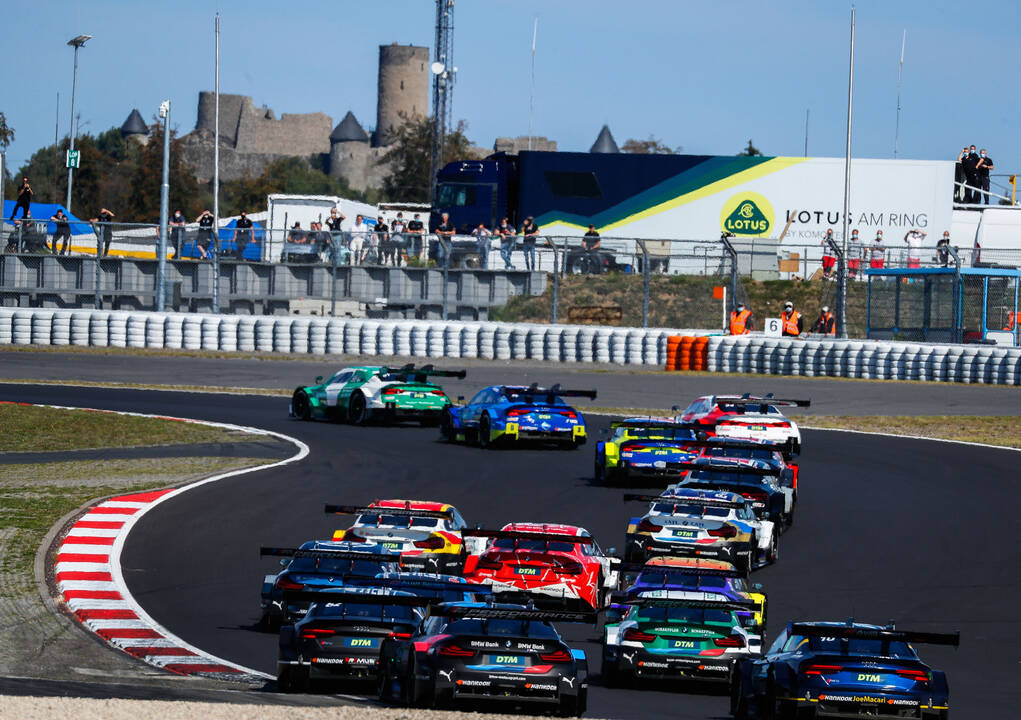 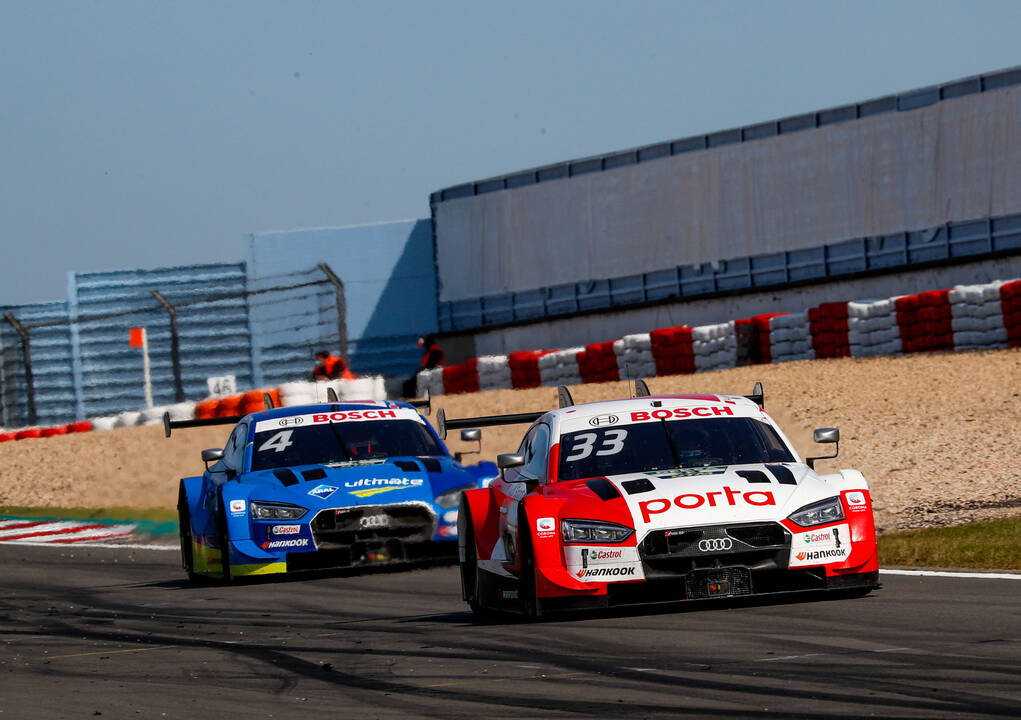 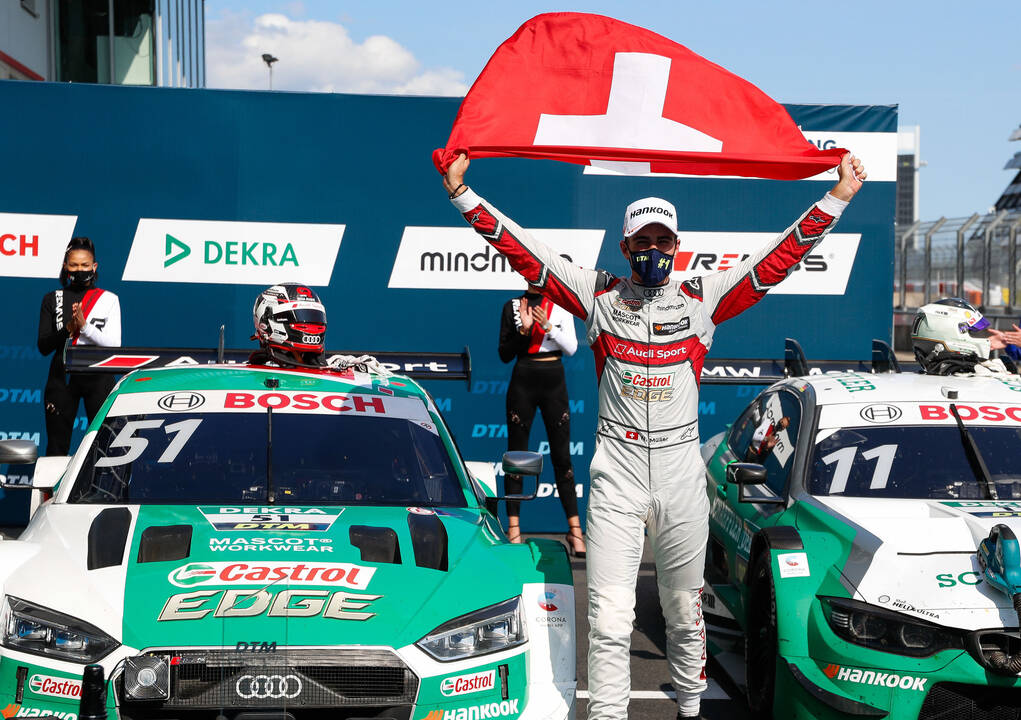 Championship leader Nico Müller from Audi Sport Team Abt Sportsline managed a perfect Saturday in the first of the four races at the Nürburgring. On Sunday, Robin Frijns crossed the finish line in first place only eight days after his first DTM triumph.

With his fourth victory of the season, the Swiss extended his lead in the drivers’ championship to 43 points. The best BMW driver is already 124 points behind after nine races. In the teams’ standings, the three Audi Sport Teams Abt Sportsline, Rosberg and Phoenix maintained their top three positions. In the manufacturers’ championship, the score between Audi and BMW at the halfway mark of the season is 614:275.

“Perfect days like today are rare in the DTM,” said Nico Müller after his commanding victory in Saturday’s race at the Nürburgring. After setting the fastest time in free practice on Friday, the Audi driver secured pole position by 0.221 seconds, which is a big gap by DTM standards. During the race, the Swiss driver continued to pull away from his rivals and finally crossed the finish line with a 15.655-second lead. His fastest race lap was half a second clear of anybody else. “Today, everything simply worked for us,” said Müller. “My Audi felt mega. The team once again delivered a quick pit stop. The strategy was perfect and I was able to manage my tires well in the very long second stint. Today, we can just be happy. Thanks to Audi and the ABT team.”

Behind Nico Müller, defending champion René Rast from Audi Sport Team Rosberg crossed the finish line. “A second place is not a bad result,” said the two-time DTM champion. “However, the gap to Nico was huge. At the moment, he’s simply driving in a different league. He was already flying yesterday. Today, he was fast in qualifying and also in the race. At some point, he just disappeared. I instead had to fight with Robin (Frijns). Luckily he spun when he tried to overtake me.”

Frijns fell back from third to fifth due to his spin. “My attack may have looked a bit optimistic and spectacular on TV, but I have managed similar overtaking maneuvers before,” said Frijns, who, for a brief moment, literally became a “flying Dutchman”. “Before the pit stop, I was able to overtake René, but I was behind him again after the stop. When I attacked him, he defended himself well and I was forced onto the kerbs. As a result, I was briefly in the air with all four wheels and spun.”

On Sunday, Nico Müller had secured pole position and immediately took the lead at the start in front of his teammate. During the first few laps, the ABT duo set itself apart from the rest of the field in seemingly easy fashion and quickly enjoyed a comfortable five-second lead. But after changing tires, Müller suddenly slowed down at the front because his car’s turbo boost air temperature was rising. “Apparently, a sensor problem,” said the Swiss. “In any case, the result was a fairly large loss of power, which got worse and worse towards the end of the race. I was just hoping to finish, because a DNF would have hurt a lot today. Fortunately, we saw the flag. Unfortunately, the race was two or three laps too long, otherwise it would have been enough for a podium.”

Müller's problems benefited Robin Frijns and crossed the finish line in first place. “Victory today feels very different from the one at Assen,” said the Dutchman. “You don’t really want to win because someone in front of you had a technical problem. Unfortunately, that was the case with Nico (Müller) today. Nevertheless, it is a victory. I already had a fast car yesterday. Today, Nico and I were equally fast at the beginning. The gap remained the same. It was very easy for me after he got the problem and I overtook him. I was able to concentrate on saving my tires and had everything under control.”

René Rast finished Sunday’s race in second place, as he had done the day before. “Even though it’s only second place again, it’s still a good result,” said the defending champion. “It’s positive that we were faster than yesterday and I was able to manage my tires very well. That makes me feel confident for next weekend, because we now know in which direction we need to go.”

“Today, for the first time this season, we had all six ‘factory’ cars occupying the top six positions on the grid after qualifying, which was a strong performance,” said Head of Audi Motorsport Dieter Gass. “Five Audi cars finished the race in front, the sixth in seventh place. That’s a very good result overall and a great start to the second half of the season for us. I’m happy with Robin for his second victory in the DTM. I felt sorry for Nico today. He had a problem with the car that cost power, but he stayed calm and scored valuable points.”

Nico Müller’s lead in the drivers’ championship over his teammate Robin Frijns has shrunk to 29 points. René Rast is another 17 points behind in third place in the standings. In the teams’ classification, Audi Sport Team Abt Sportsline extended its lead further. In the manufacturers’ championship, Audi has a 400-point lead over BMW after ten races and could secure the manufacturers’ title early this coming weekend. Then, two more DTM races are on the program, which will take place on the Nürburgring’s sprint circuit layout (live on SAT.1 from 1 PM CEST on Saturday and Sunday).