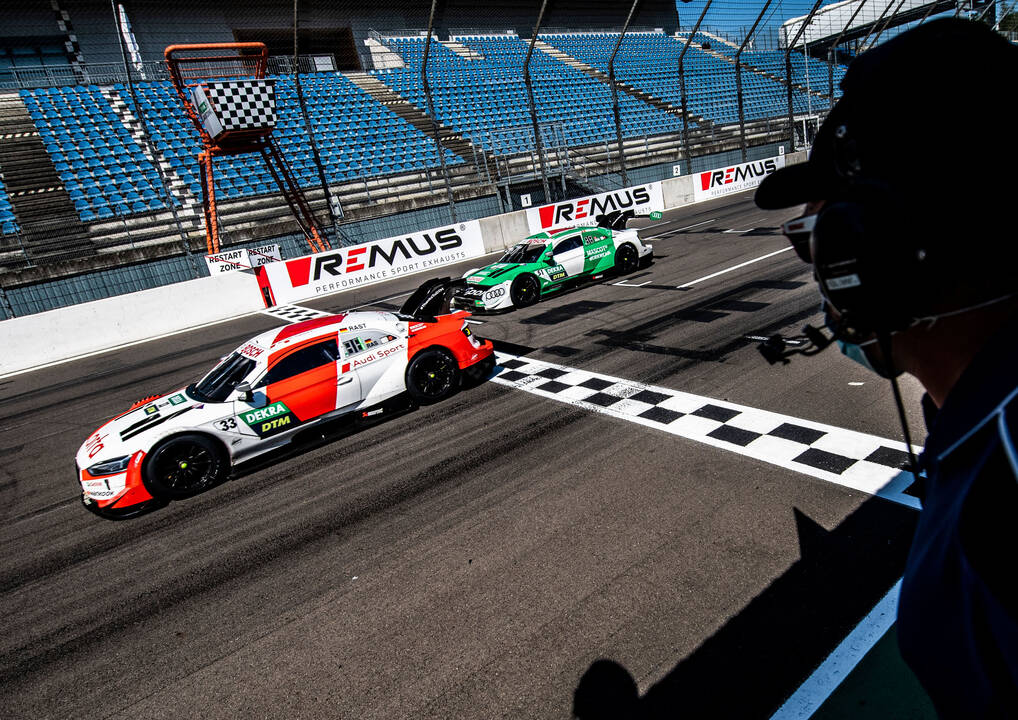 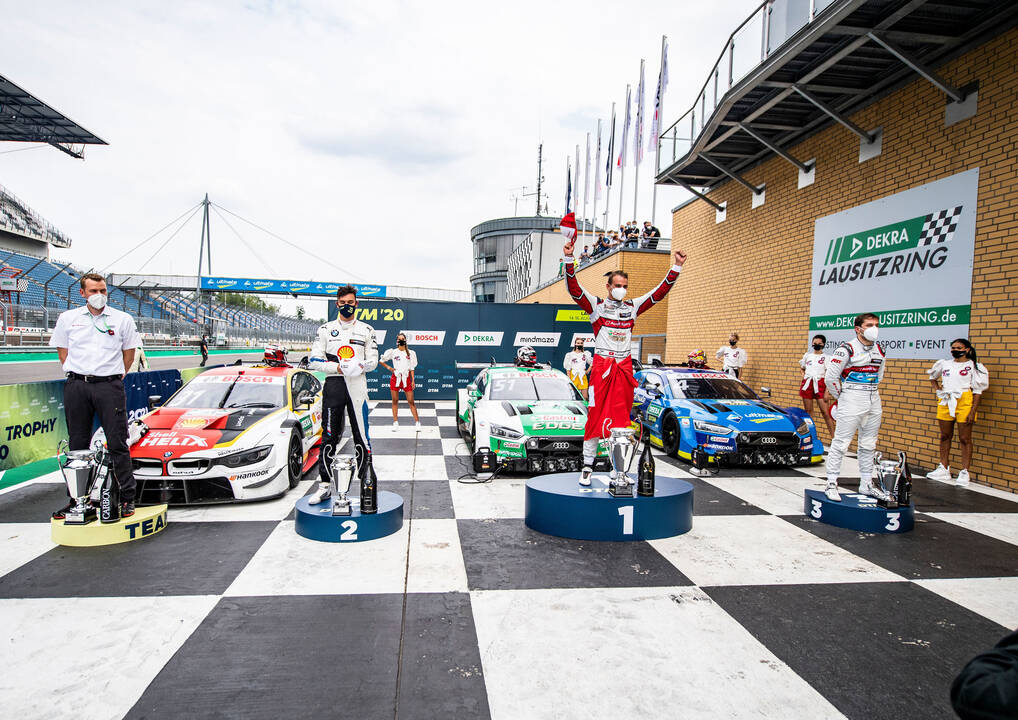 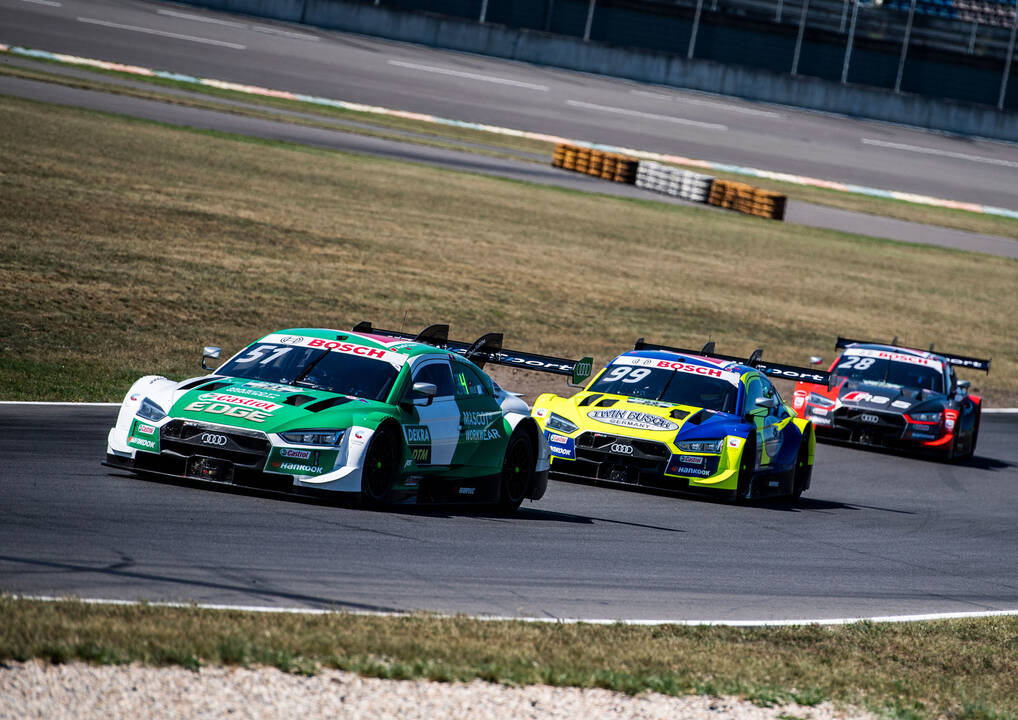 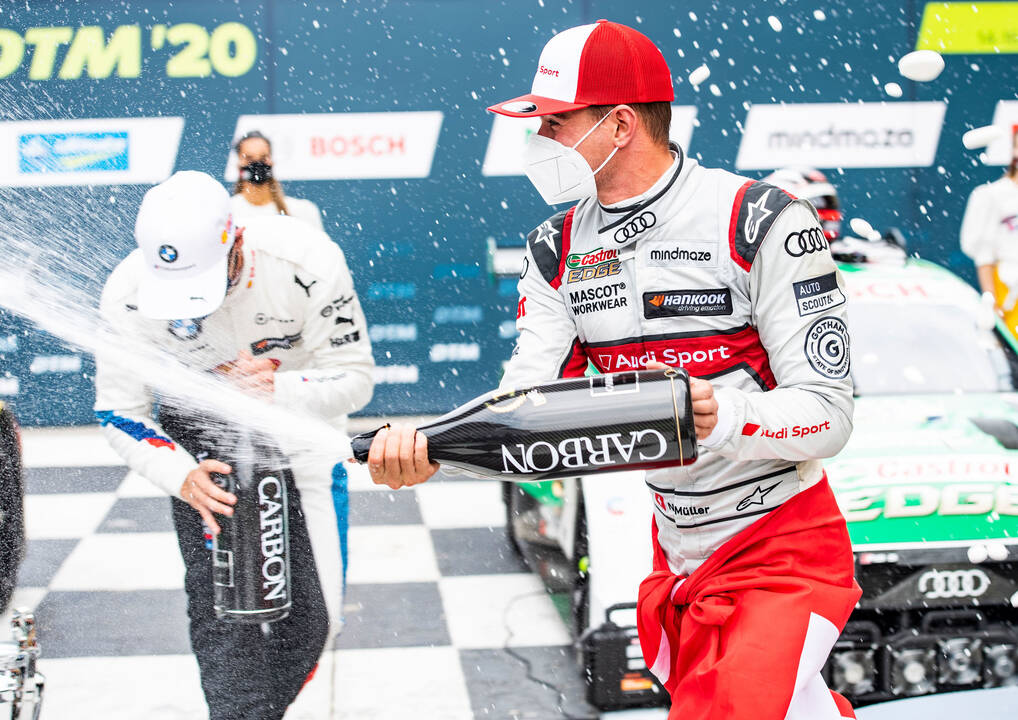 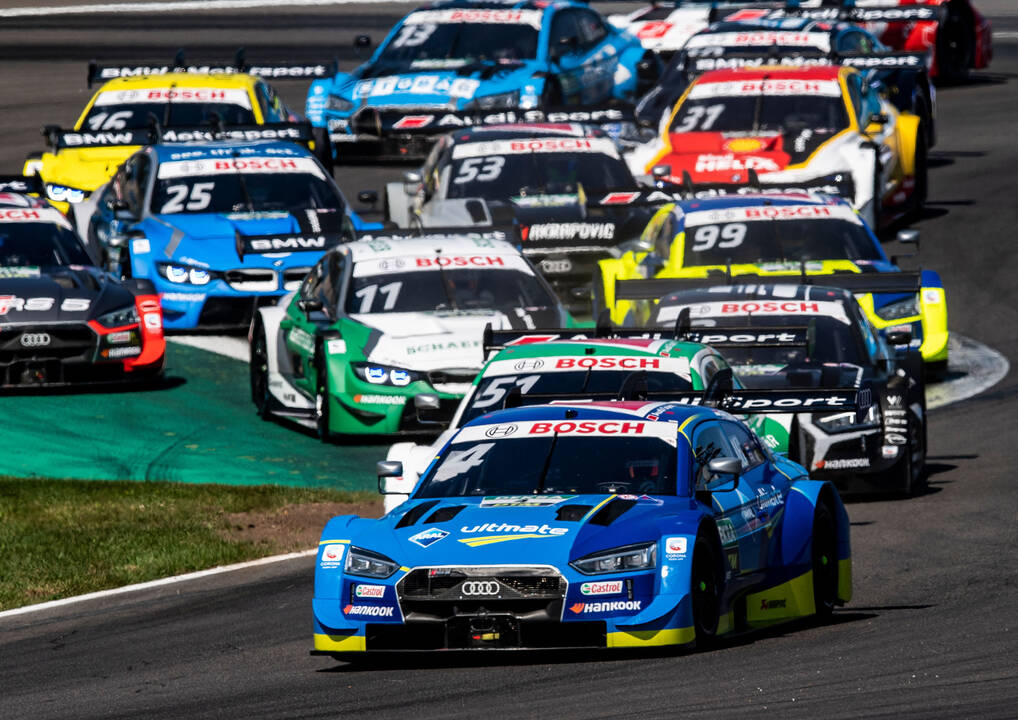 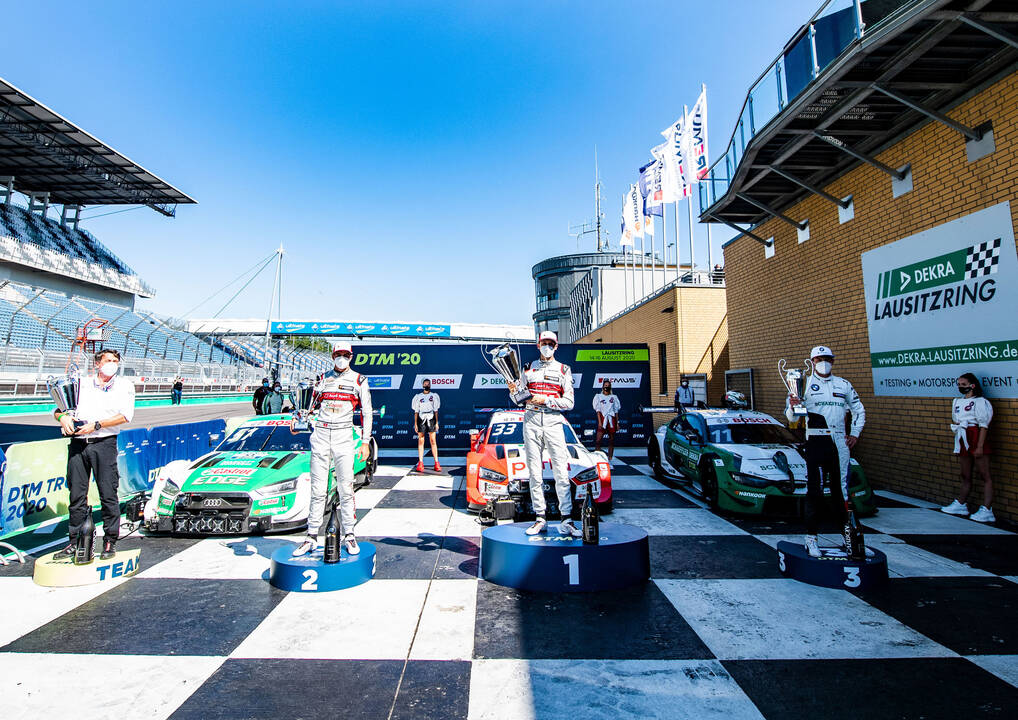 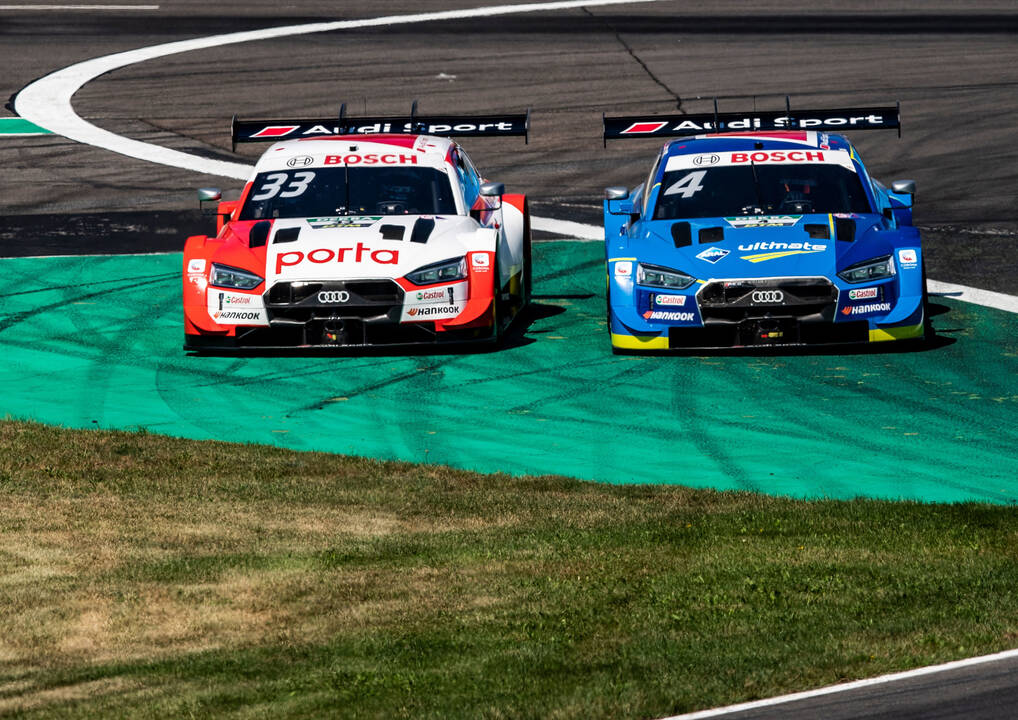 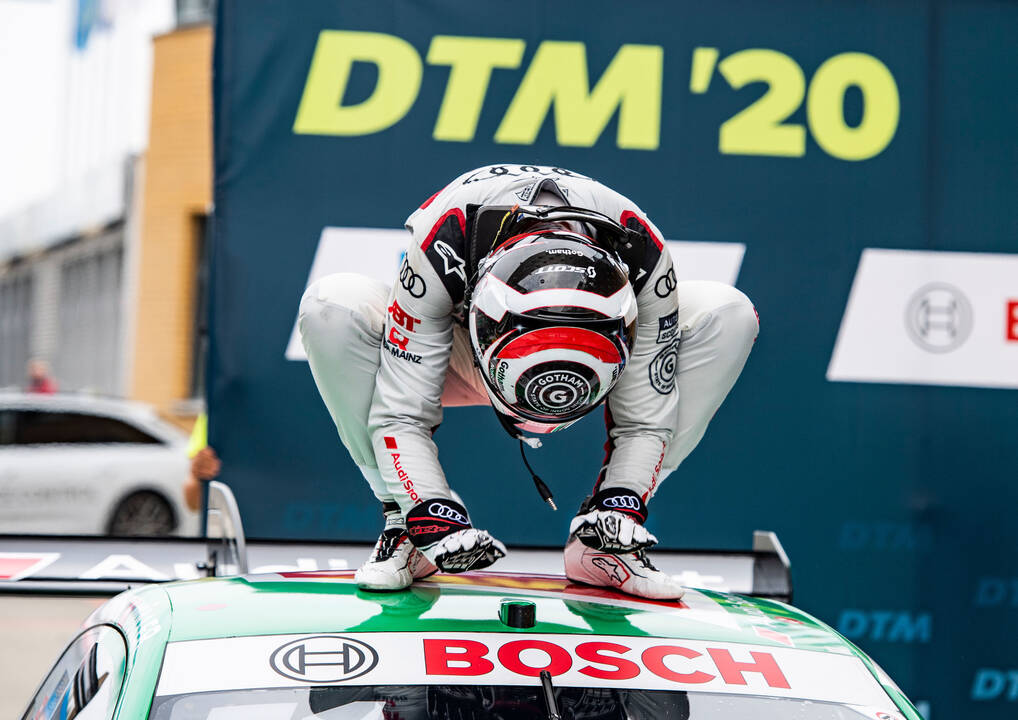 “The race was pretty entertaining,” said René Rast, who had to fight hard for his first victory of the season – especially against pole sitter Robin Frijns. The two brand mates clashed in the first corner after the start. “I had to drive through the grass in Turn 1, and also afterwards the fight with Robin was pretty hard. We pitted early to react to an undercut of Robin and Marco (Wittmann). I knew that Nico would come in the end on fresher tires. Our strategy was brave, and it got pretty tight, but fortunately it worked for us.”

Nico Müller didn’t get a perfect start from second on the grid. “There was more grip than I expected,” said the Swiss. “When René and Robin did some rallycrossing in front of me, I briefly had a clear view. But I came onto the outside line in Turn 3. As a result, also Marco Wittmann passed me, and I dropped back to fourth. After that it was hard work – but we managed the race pretty well.”

After a long first stint, Müller returned to the track in seventh, quickly making up position after position and, with the fresher tires, eventually chasing leader René Rast. “In the end, only a third of the car length was missing for victory,” said Müller. “Yesterday the race seemed to be an eternity – today I prayed that it would last one lap longer.”

Müller’s teammate Robin Frijns started from pole position for the third time in the fourth DTM race of the year. “I didn’t expect this before the season started,” said the Dutchman. “The qualifying performance is great, but we still need to work on our race pace.” After an early pit stop, Frijns was first passed by René Rast, later by Nico Müller and two laps before the end of the race also by Marco Wittmann.

“A race can hardly be more exciting,” said Head of Audi Motorsport Dieter Gass. “There were some very tough battles throughout the whole race and until the last lap it was not really obvious who would win. It was extremely tight between René and Nico. I’m happy that we managed to clinch another one-two victory and that we showed an extremely strong performance in qualifying as well with the top six positions on the grid. In the DTM you simply must never stop improving. I’m already looking forward to next weekend here.”

At the race of the day before: Nico Müller is the man of the hour in the DTM. After his double victory at the season opener at Spa, the Swiss driver also won Saturday’s race at the Lausitzring for Audi. Müller is then the first driver ever to win the first three races of a DTM season. “Today’s success is largely due to my team,” said Müller. “Because I was racing in the Formula E finale in Berlin, I wasn’t able to be part of the usual preparation for the race weekend. The guys did a mega job, explained to me what I’ve got to look out for here and gave me a fantastic car. I had a good start, was able to stay in front afterwards and bring the victory home. I’m very happy.”

Teammate Robin Frijns secured pole position just like at the season opener at Spa and completed Audi Sport Team Abt Sportsline’s success on Saturday with third place. “I didn’t expect that because on Friday I was four tenths of a second behind Nico, but we worked hard overnight,” said the Dutchman. “When you finish on the podium you can never complain. The first ten laps I felt really comfortable. I was able to put pressure on Nico. But after ten laps my tires seemed to drop more than the others’."

Next Saturday and Sunday (22/23 August), the DTM will contest two more races at the Lausitzring – then on the slightly longer track.