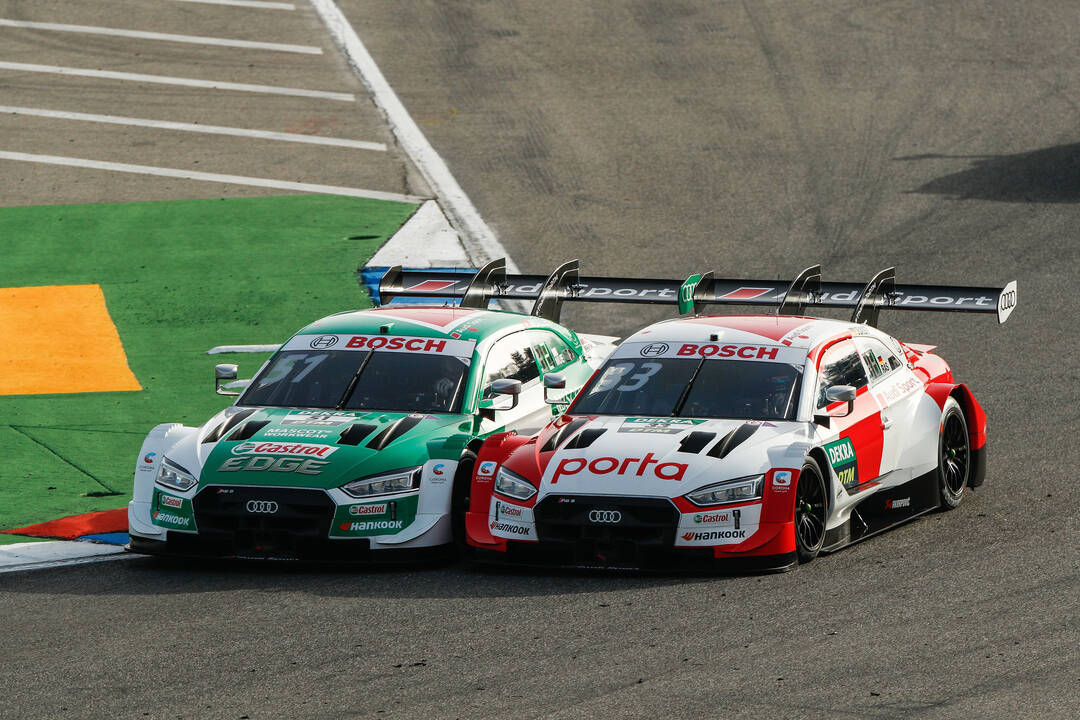 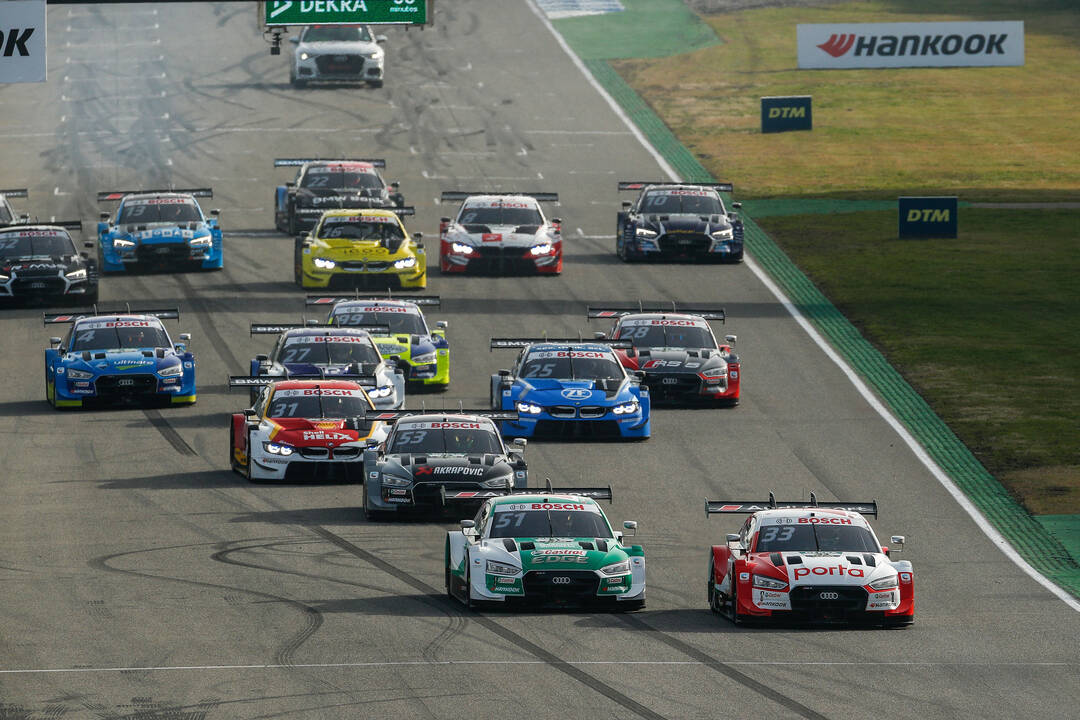 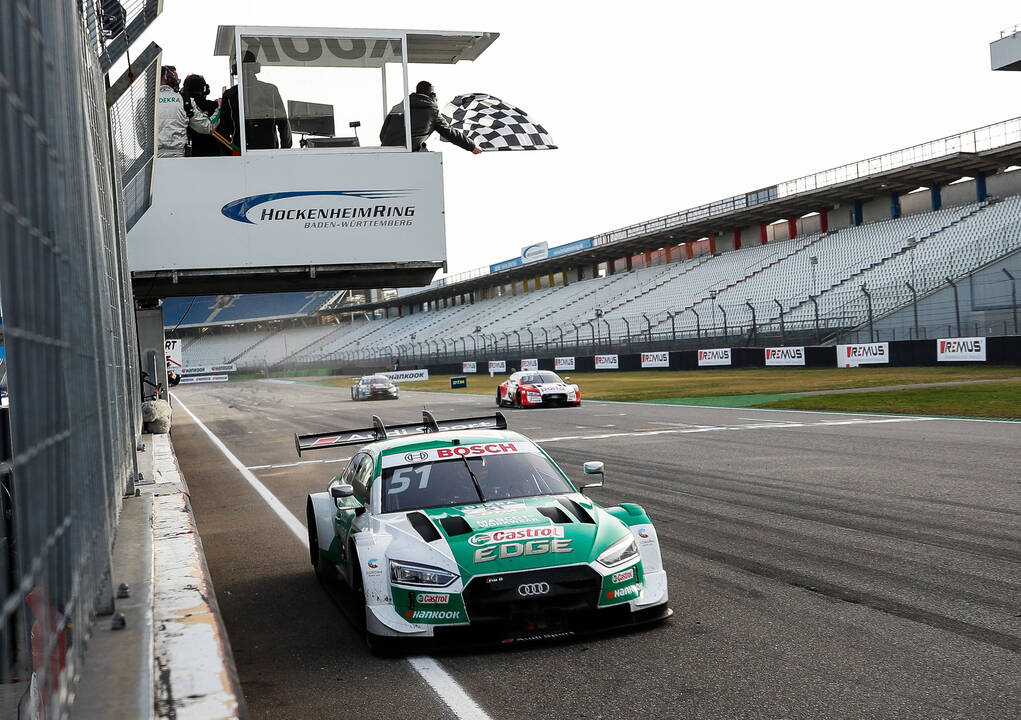 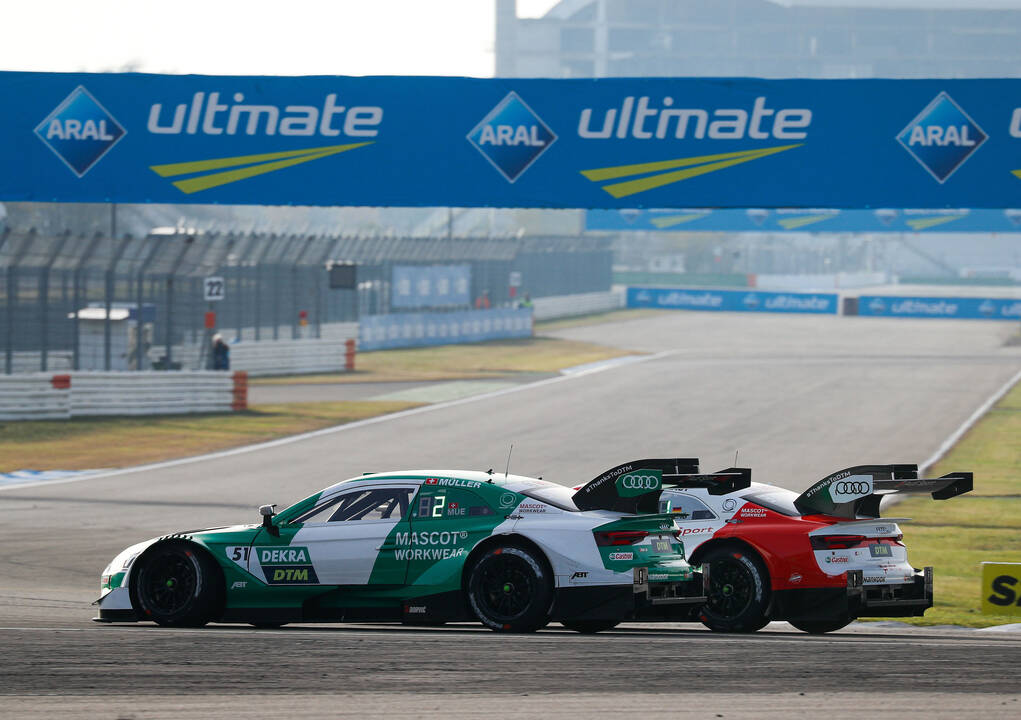 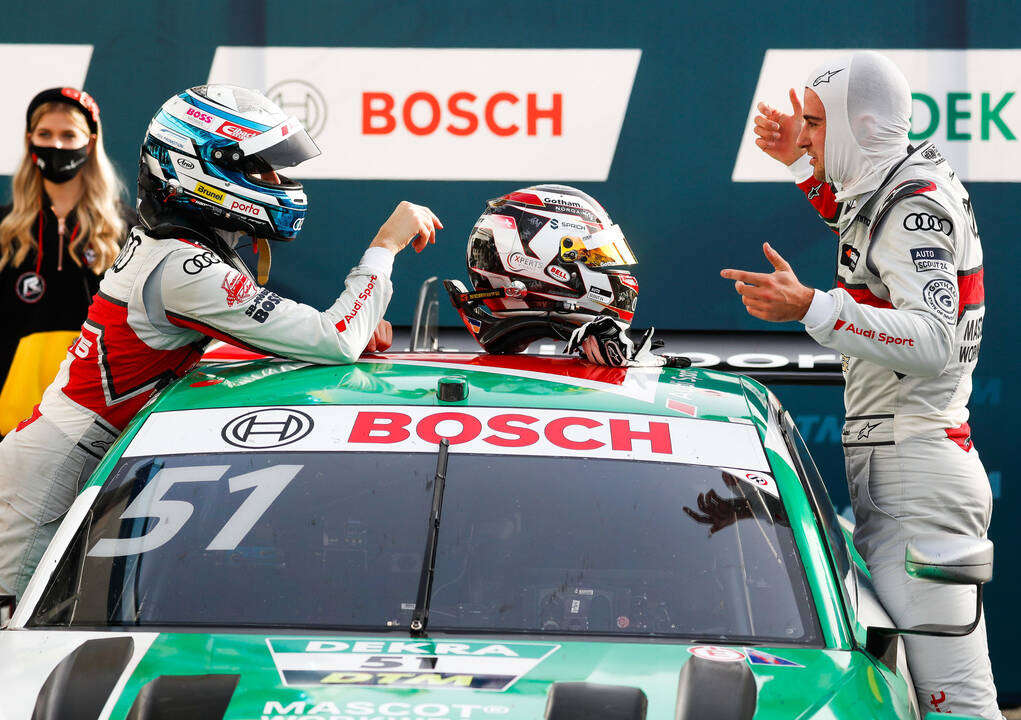 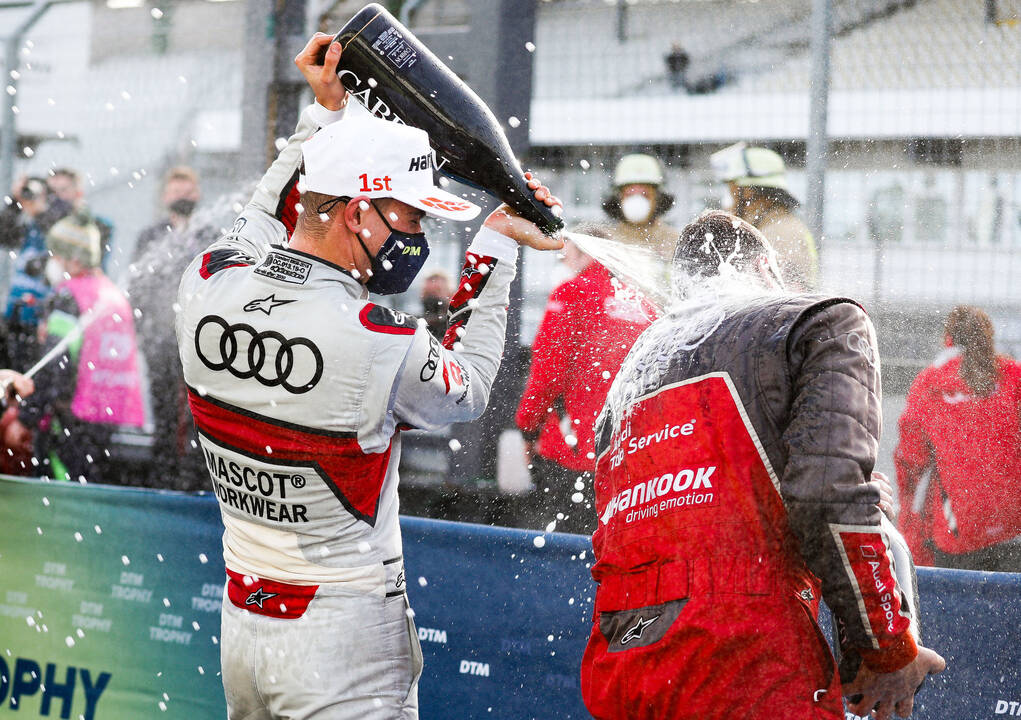 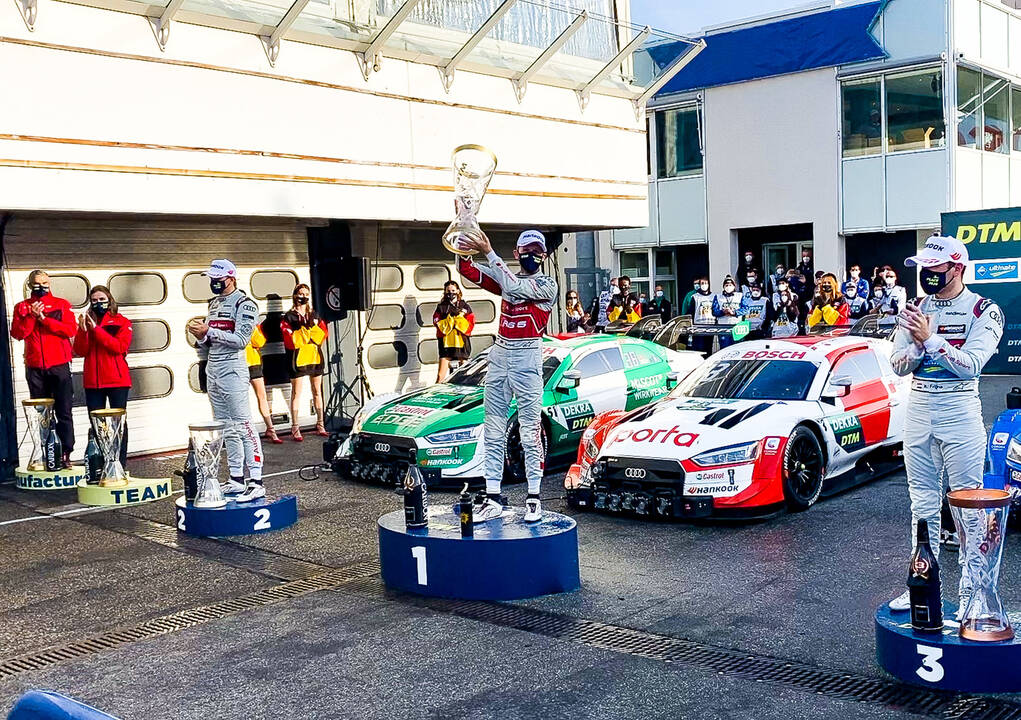 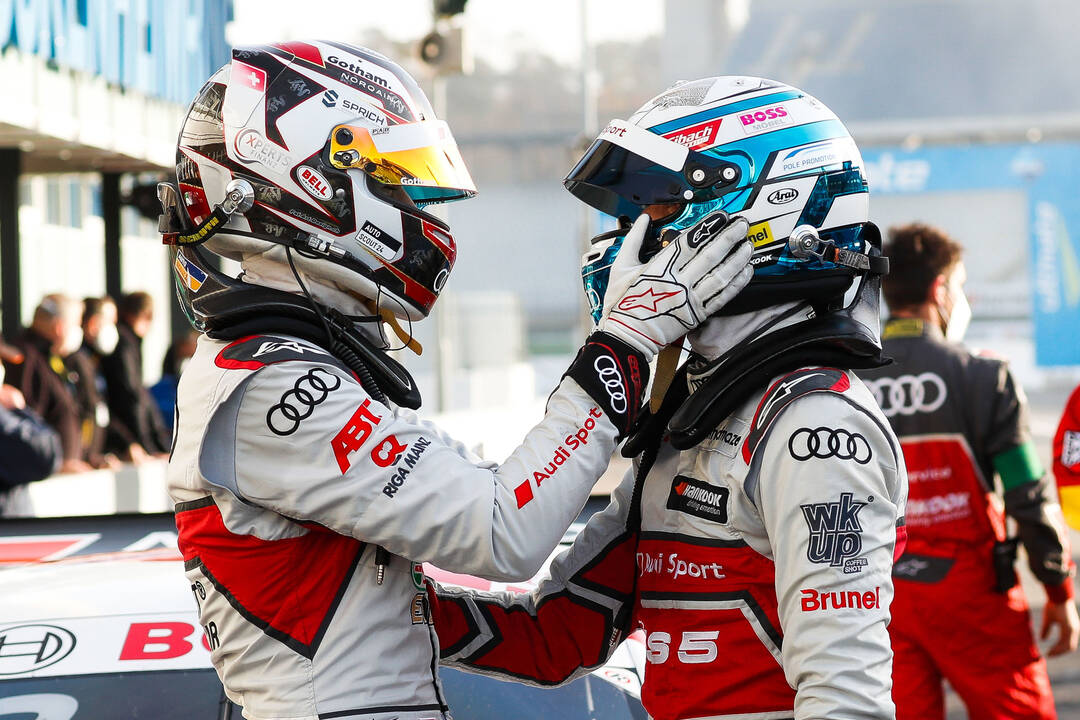 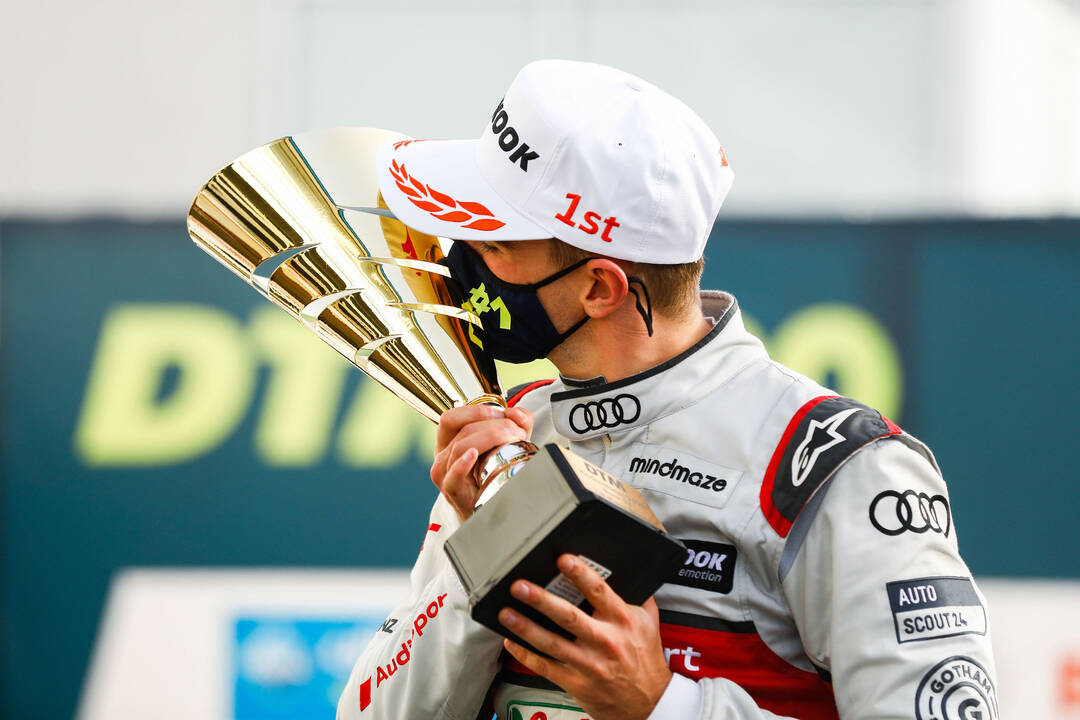 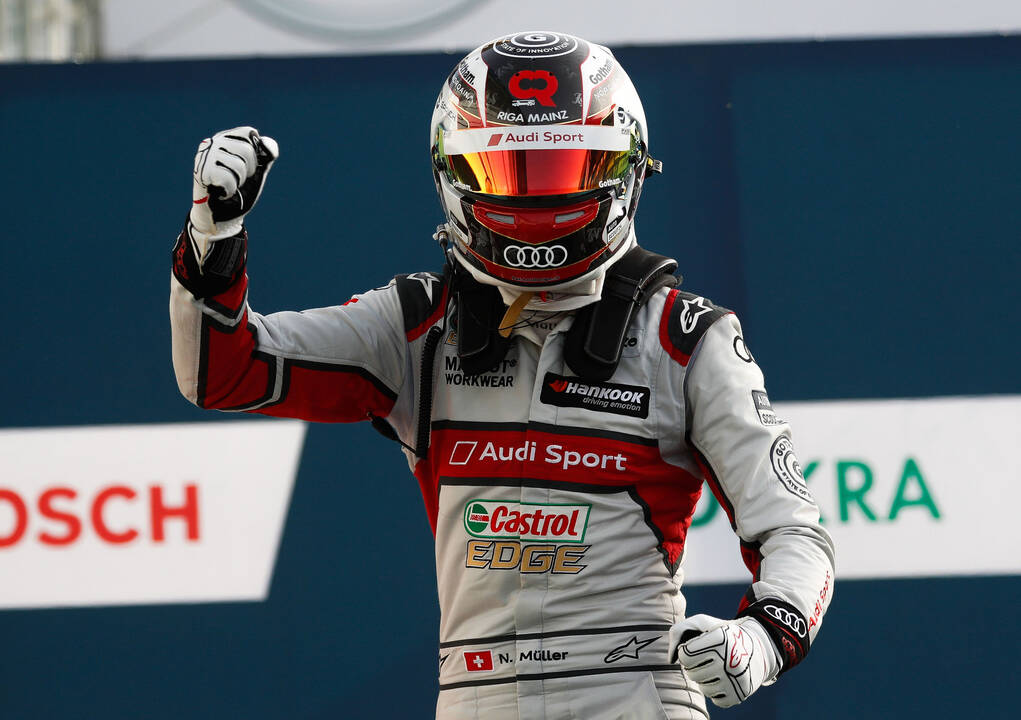 A final could hardly be more exciting: With a hard-fought victory in the first of the two final races at the Hockenheimring, Nico Müller from Audi Sport Team Abt Sportsline kept his chances of winning the DTM title alive. But on Sunday René Rast won the title.

On Saturday, Rast and Müller fought a tough battle. Rast secured pole position by 48 thousandths of a second. From second place, Müller managed to pull off a better start and an overtaking maneuver in the first corner, in which Rast was forced off the track. It was just a foretaste of the reminder of the race, in which the two Audi drivers repeatedly overtook each other and touched slightly several times. In the end, Müller crossed the finish line as the winner, finishing 0.622 seconds ahead of Rast.

“It was a great show that our drivers put on today, I’m really looking forward to the finale tomorrow,” said Markus Duesmann. The Chairman of the Board of Management of AUDI AG is following the finale at Hockenheim just as Head of Technical Development Oliver Hoffmann and Julius Seebach, Managing Director of Audi Sport GmbH.

“The race was extremely exciting,” confirmed winner Nico Müller. “I really enjoyed it in the car, although there was a lot at stake. I hope that the fans at home in front of the screens enjoyed the spectacle just as much. I am very happy that I won the race. It was a day just like we needed. The team played a very decisive role. After the second safety car, we didn’t know exactly whether there would be four or five more laps to go. They told me that it was going to be extremely close and that I should pay close attention. Knowing that it was the last lap was very important today.”

René Rast could only confirm this: “I think we could have won, if I had known that it was the last lap. When I crossed the finish line, I looked at the display. It said: two more laps. I wanted to save the attack for the lead with Push-to-Pass and DRS for the last lap and was shocked that the race was over. I don’t know what went wrong, but it cost us the victory today.”

Rast’s teammate, Jamie Green, finished third. It was the British driver’s first podium since the start of the season at Spa. “That was a very good race,” said Green. “Whoever was in the lead couldn’t pull away. There were a lot of overtaking maneuvers in front of me and it was cool to watch. I was able to catch up with René and Nico before the second safety car, but I didn’t want to be a party crasher.”

Just like Mike Rockenfeller, Robin Frijns also took fresh tires during the second safety car period. Nevertheless, seventh place was not enough to keep his small title chance alive. “My qualifying was bad and in the race, I did not have the pace,” said Frijns. “With an early tire change, I almost got into the lead, but my tires were already at the end by that point.”

“That was an incredible race,” said Head of Audi Motorsport Dieter Gass. “The fight between Nico and René was tough and maybe a bit on the limit at one point or another, but from my point of view it was still okay."

At the final race of the season on Sunday, Rast crossed the finish line with his Audi RS 5 DTM in commanding style and once again wrote DTM history: No driver has ever managed to win the title three times in four years.

“It’s too good to be true,” said Rast after crossing the finish line in the final race more than ten seconds ahead of his title rival Nico Müller. “We have achieved more than I would have ever dared to dream of. With 24 victories, I am now the most successful Audi DTM driver. We won our third title, and that after a year that was very difficult for us. In the first half of the season, we did not have the pace. Nevertheless, we achieved podiums and scored enough points to stay close to Robin (Frijns) and Nico (Müller). At Zolder, we lit the fire, won four races in a row and arrived at the final weekend in the lead. With a strong performance in qualifying and in the race, we won the title today."

One of the first to congratulate Rast in the Hockenheim parc-fermé was Markus Duesmann, CEO of AUDI AG. “Congratulations to René Rast on the title, but also to ABT for the teams’ title and the entire Audi Sport team. What everyone has achieved together in the last year of our factory DTM commitment is truly unique.”

Head of Audi Motorsport Dieter Gass accepted the trophy for winning the manufacturers’ championship, which Audi won with 1253:500 points: “The fact that we managed to finish the last race with our six factory drivers in the top six positions says it all. The DTM was an incredible success for Audi, especially the last two years with the four-cylinder engines. In Class 1, we won everything that could be won, dominated in 2019 and also in 2020. René deserves the title. Nico gave him a great fight until the very end. I would like to say a big thank you to the whole team, to everyone here at the track, but also to everyone at home in Neckarsulm, in Neuburg and in Ingolstadt. Thanks a lot! It was an honor to work with this team and to celebrate such great successes together in the DTM. Now it’s time to head for new shores.”

Team coordinator Maike Frik accepted the championship trophy for the teams’ championship on behalf of Audi Sport Team Abt Sportsline, which also took second and third place in the drivers’ championship with Nico Müller and Robin Frijns. After his victory on Saturday, Müller was also leading at certain points in the last race. However, with the second set of tires, he could no longer keep up with René Rast’s pace. “We were simply not fast enough to challenge René today,” said the Swiss. “Compared to yesterday, we changed a few small things that we thought would help us, but that obviously went in the wrong direction. That was of course frustrating, but we didn’t lose the championship here, we already lost it at Zolder. I would like to congratulate René on a great season. He is a worthy champion. We had great fights and maybe they weren’t our last.”