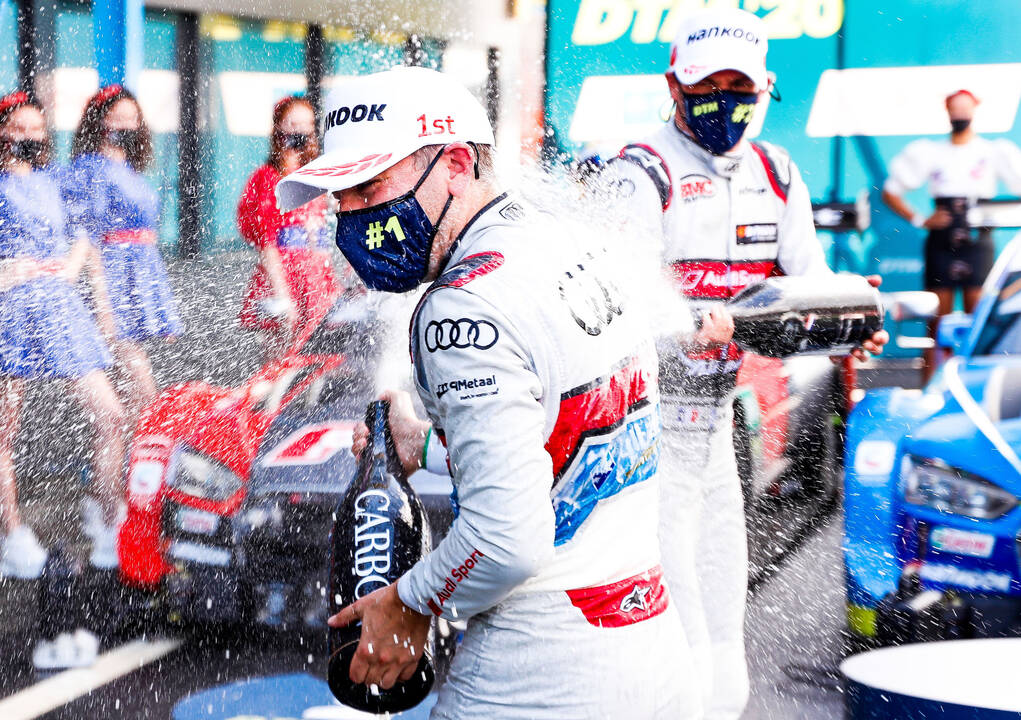 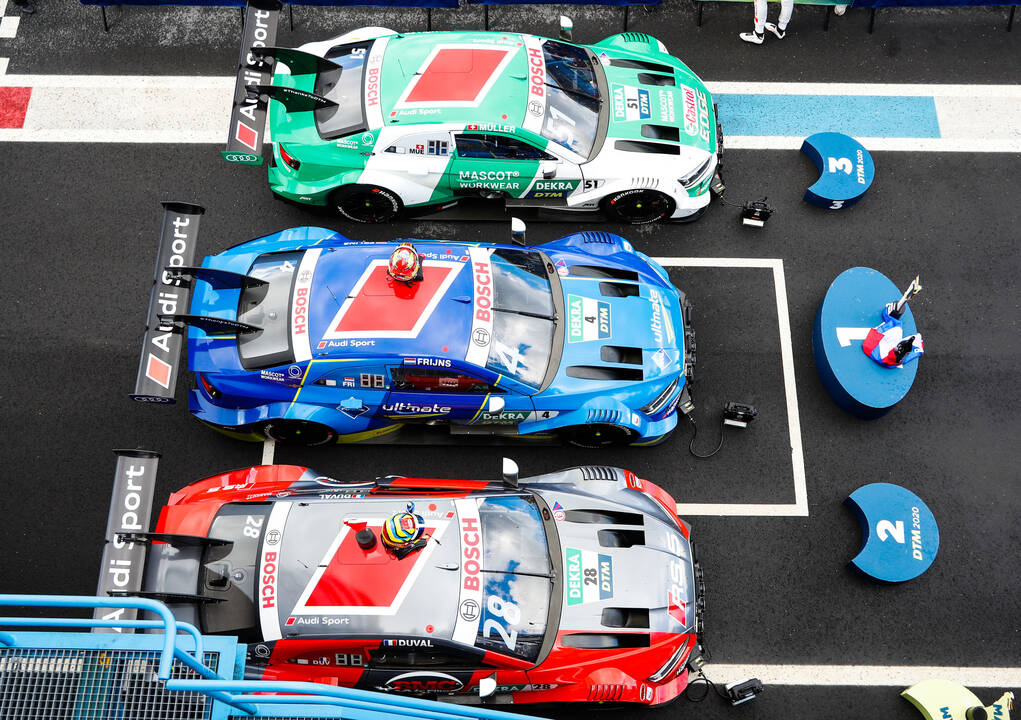 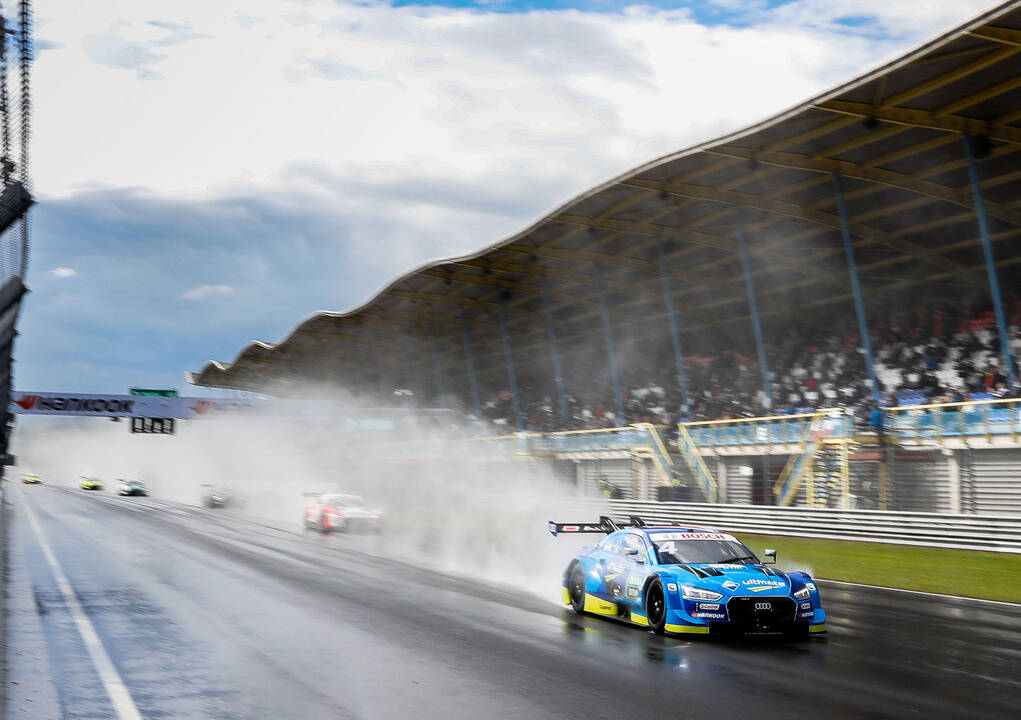 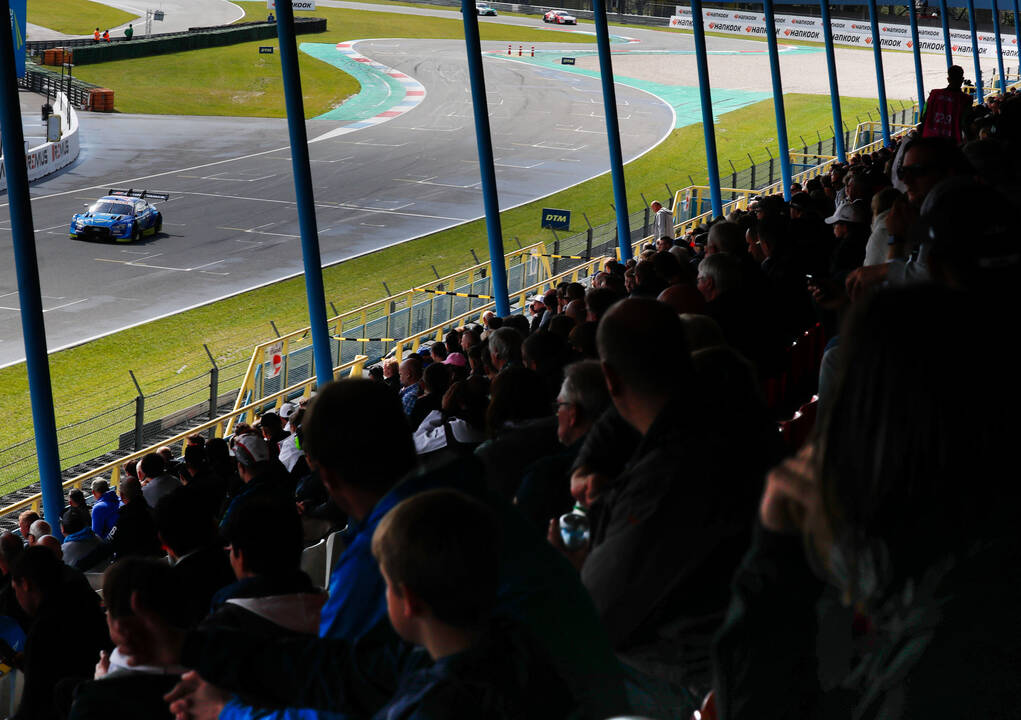 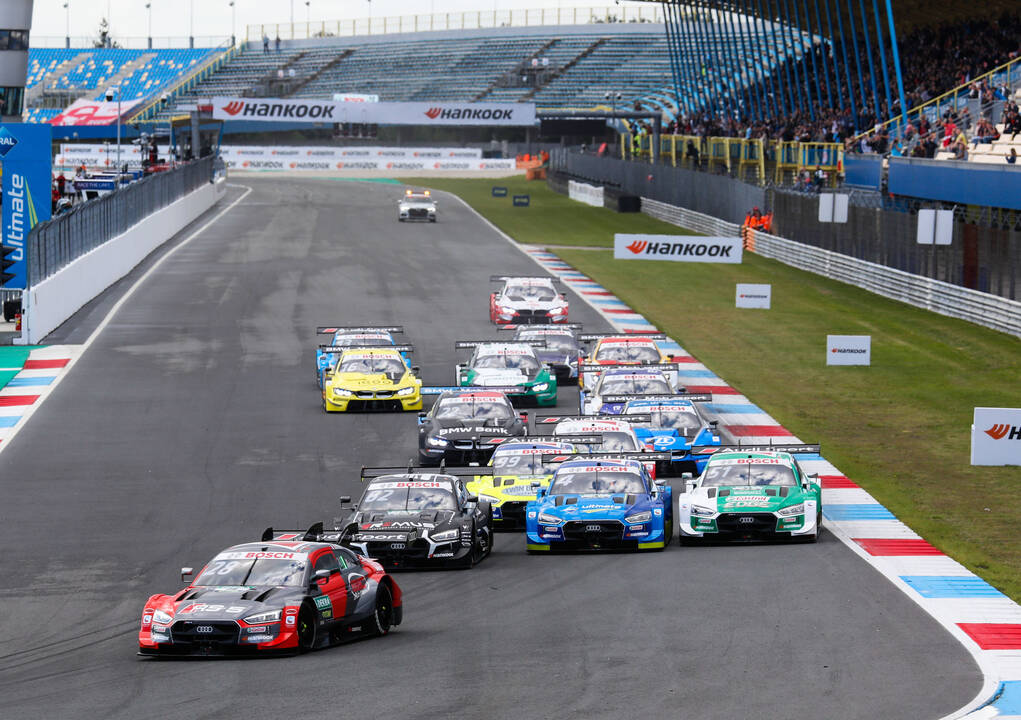 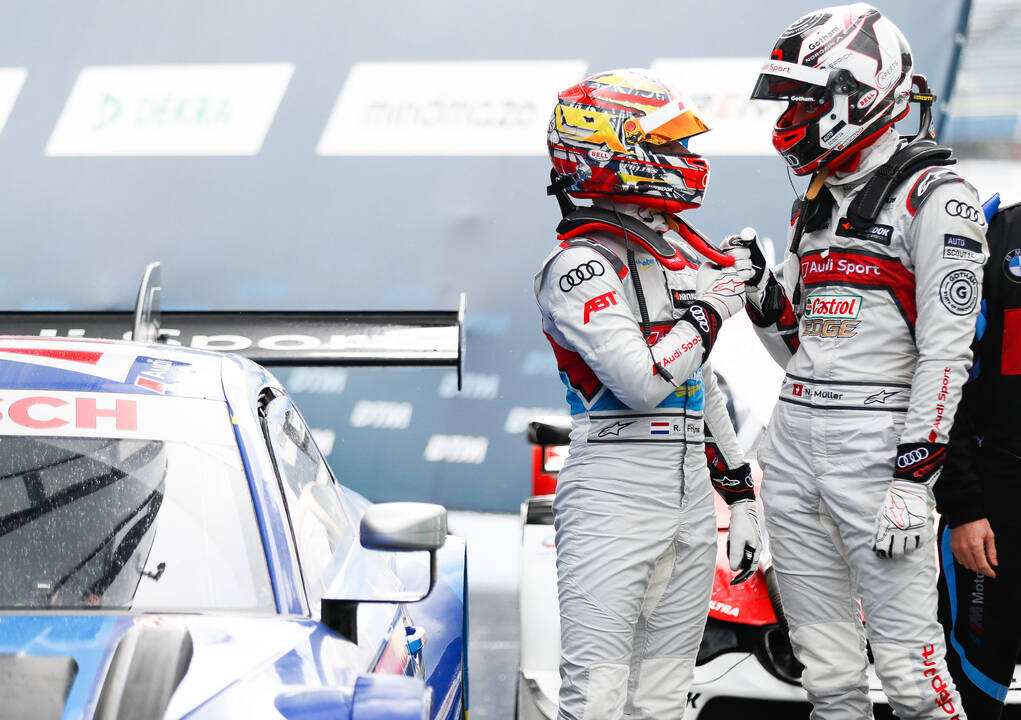 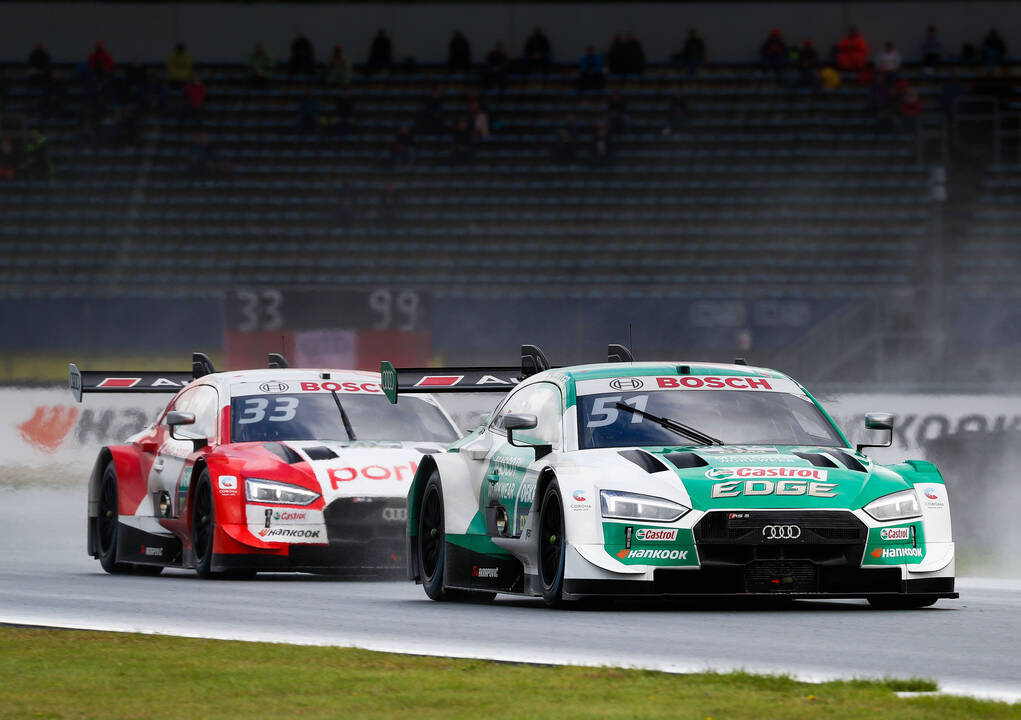 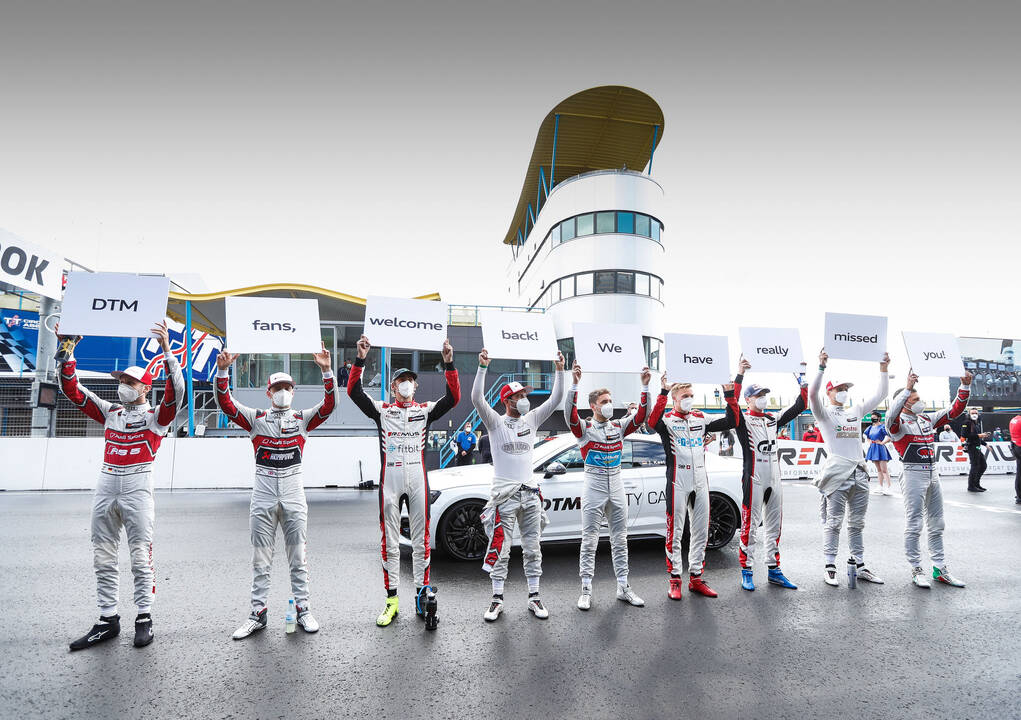 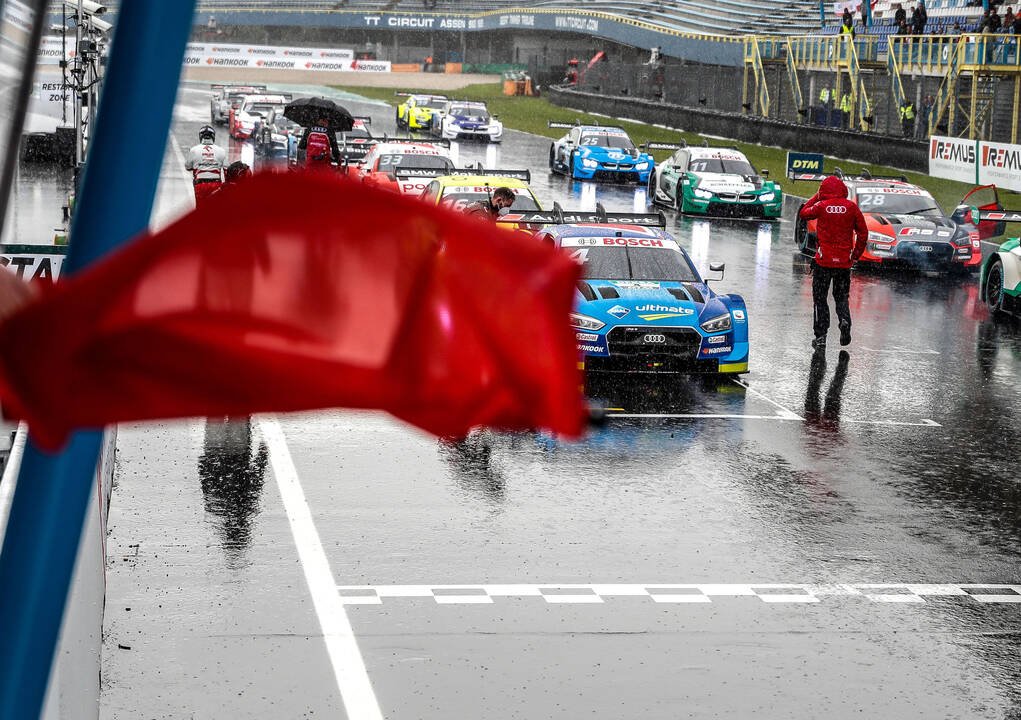 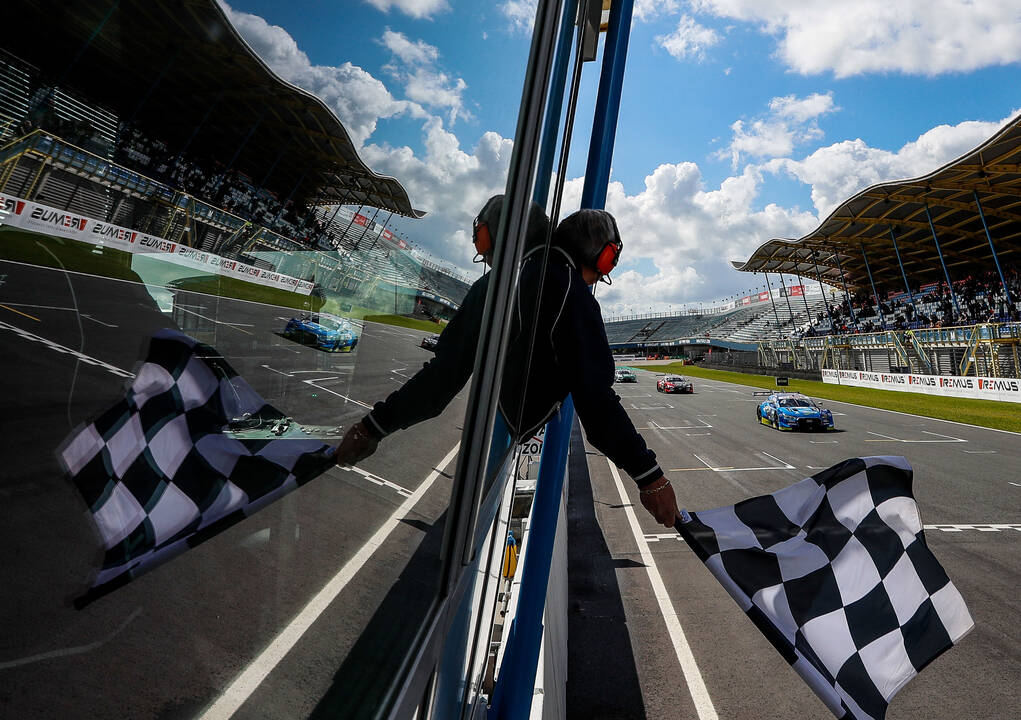 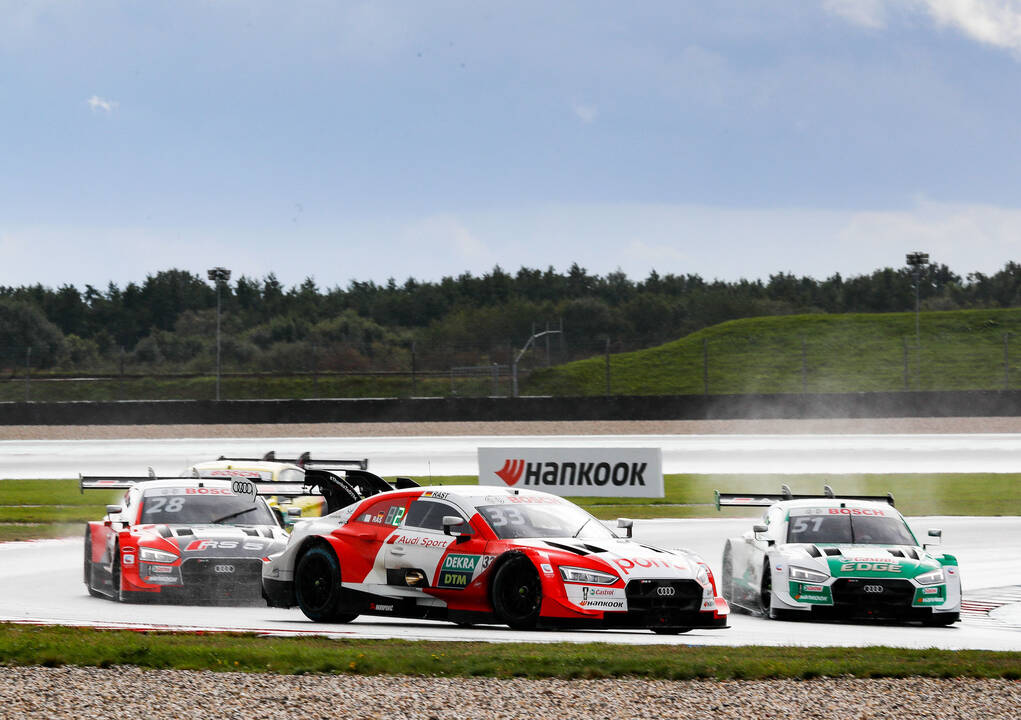 Robin Frijns could not have chosen a better moment for his first victory in the DTM: The Dutch Audi driver triumphed at Assen on Saturday in front of a home crowd. On Sunday, himself and Nico Müller handed Audi Sport Team Abt Sportsline a double podium.

For the first time since the beginning of the COVID-19 pandemic, spectators were admitted to a DTM race. The Audi drivers made them cheer even before the start when they held up signs in front of the main grandstand with an emotional message: “DTM fans, welcome back! We have really missed you!”

After 36 laps, the Dutch fans again had a reason to cheer: Local hero Robin Frijns from Audi Sport Team Abt Sportsline crossed the finish line as the winner for the first time in his DTM career after a thrilling battle with Loïc Duval from Audi Sport Team Phoenix. “I had to wait almost three years for this moment,” said Frijns. “I came close very often, but something always happened. I’ve been on the podium in the DTM a couple of times, but never at the top. It’s fantastic that it happened here at Assen where fans were allowed back in for the first time. There really couldn’t have been a better place for my first DTM victory.”

Only on lap 30, Frijns managed to pass Loïc Duval who had been leading up to that point. The Frenchman started the race from pole position with his Audi RS 5 DTM on an initially damp track. “When you lead for so long, you want to win the race,” said Duval. “But I was fighting with the tires. In the first stint, the front tires went down, in the second the rears. With Push-to-Pass and DRS, Robin was able to catch up and overtake me just before the end. I was able to keep up until the finish but was never close enough to attack without risk. That a Dutchman wins in the Netherlands is a great story, but tomorrow I want to be at the top of the podium.”

Nico Müller defended his lead in the drivers’ championship with third place in his first DTM race as a father. The Swiss dropped from second to sixth on the opening lap. “I was stuck next to Robin (Frijns),” said Müller. “When you lose so many places at the beginning, a third place is still a good result. The tire wear was not as high as we all expected. I had a great pit stop which allowed me to pass René (Rast). Thanks for that one to the team! I’m very pleased for the guys and also my teammate Robin, who managed his first victory at his home race – very well deserved. He has often shown he can do it. Now he’s finally proven it black on white.”

“I didn’t expect Robin to win here at Assen where tire wear is usually particularly high,” said Head of Audi Motorsport Dieter Gass. “I am all the more happy for him. We were very concerned about the tires before this race and had even planned two pit stops for some cars. But with the damp track at the beginning of the race, tire wear was less than expected. All drivers managed to get through with one stop. We saw fantastic racing, the 14th pole position in a row for Audi in the DTM and another 1-2-3-4-5 victory.”

On Sonday, heavy rain showers caused difficult conditions. For Robin Frijns, there was the first surprise as early as on the starting grid: His partner Maike Frik, who is responsible for organization in Audi Sport Team Abt Sportsline, stood in front of his blue Audi RS 5 DTM as a “grid girl”. “Last year, she made the promise to do this for me when I take my first victory in the DTM,” said Frijns. “Respect that she not only remembered it, but also pulled it off in these weather conditions.”

Frijns did not disappoint his partner afterwards. On lap eleven, he overtook Audi Sport Team Phoenix’s Loïc Duval, who had been leading up to that point, and then continued to pull away from his pursuers. The Dutchman pitted for tires with a lead of almost ten seconds. “I was quite surprised that I was only second after the pit stop and suddenly had to fight with Sheldon van der Linde (BMW driver).”

The South African had pitted very early for a tire change, exactly the right strategy on the wet track. A red flag shortly before the end of the race also played into van der Linde’s hands: The BMW driver was able to change tires during the break and defended his lead after the restart.

“After the red flag, the conditions were very dangerous,” said Robin Frijns. “There was an extreme amount of water on the track. It would have been stupid to risk too much and throw away second place. With my victory yesterday and second today, I managed to have a great weekend in front of my home crowd.”

Frijns collected the most points at Assen and is now only 26 points behind teammate Nico Müller in the drivers’ championship. The Swiss experienced a déjà-vu of the previous day on Sunday. “After a good start, I was stuck behind Loïc and Robin,” said Müller. “It was annoying that I again lost several places on the first lap. The poor visibility in the rain made it very difficult to catch up. Nevertheless, I managed to work my way up to second behind Robin. BMW managed a pretty smart move with the early pit stop for Sheldon. The red flag of course helped them even more. Third place is a good result, but we didn’t get the maximum here. The hunger for victory is definitely getting bigger again.”

Defending champion René Rast from Audi Sport Team Rosberg secured pole position in a close qualifying session on a dry track on Sunday. “But, the race again didn’t go our way,” said Rast after a hard-fought fifth place. “There were a lot of decisions needing to be made in these conditions. Sometimes we were right, sometimes not. In addition, we had a small technical problem with the car that cost me power. I lost a lot of points to Nico and Robin again, but we will keep on fighting. A lot can still happen this season.”

“It was another exciting DTM race,” said Head of Audi Motorsport Dieter Gass. “With the rain at the start, the conditions were very difficult. It was not quite sure whether the track would dry off or if more rain showers would come. There were different sets of information on this. We saw various tire strategies. At the end, an early stop was the lucky strategy today. The race stoppage also played a role, because I think that without the red flag, our drivers would have caught Sheldon in the end, but that’s racing! Second, third, fourth and fifth place is a good overall team performance. Now we are looking forward to the Nürburgring.”

There, a total of four more DTM races are on the agenda over the next two weekends.