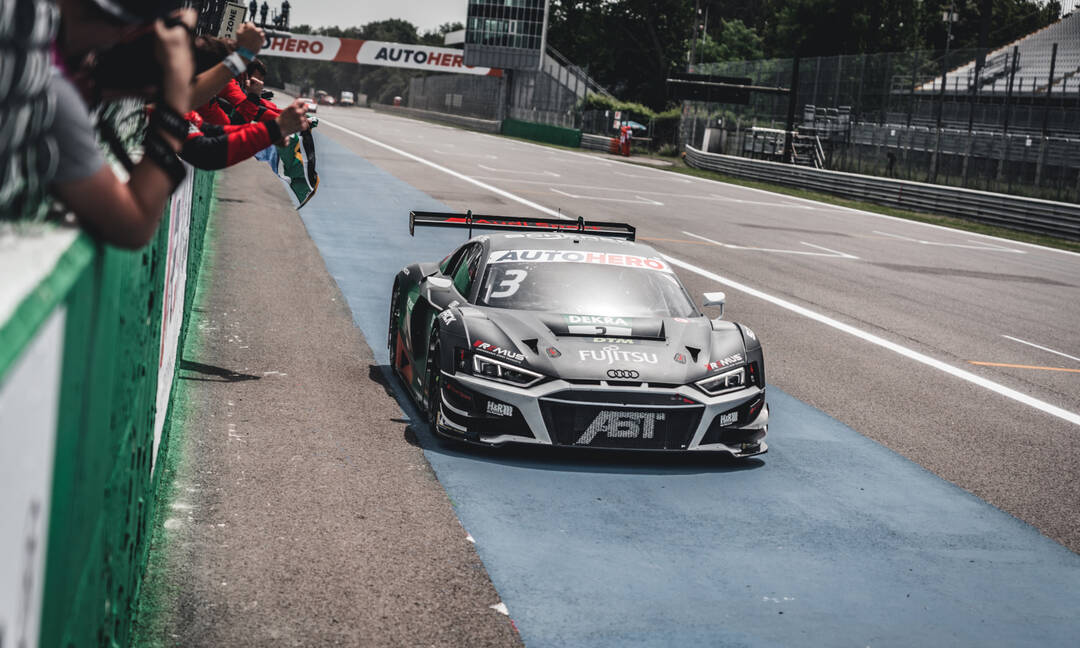 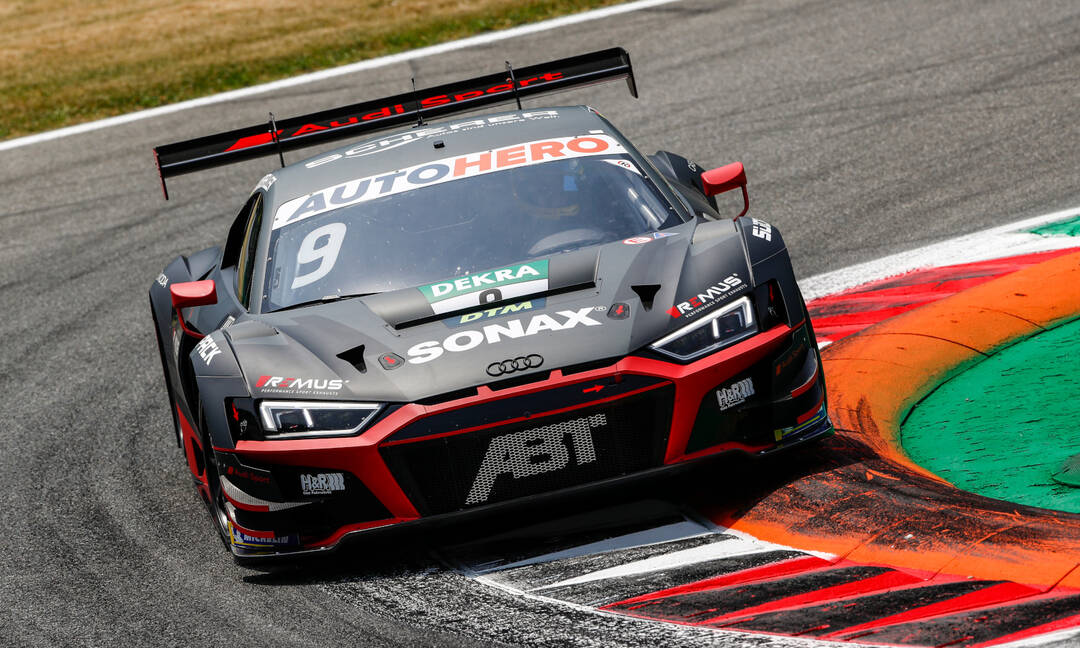 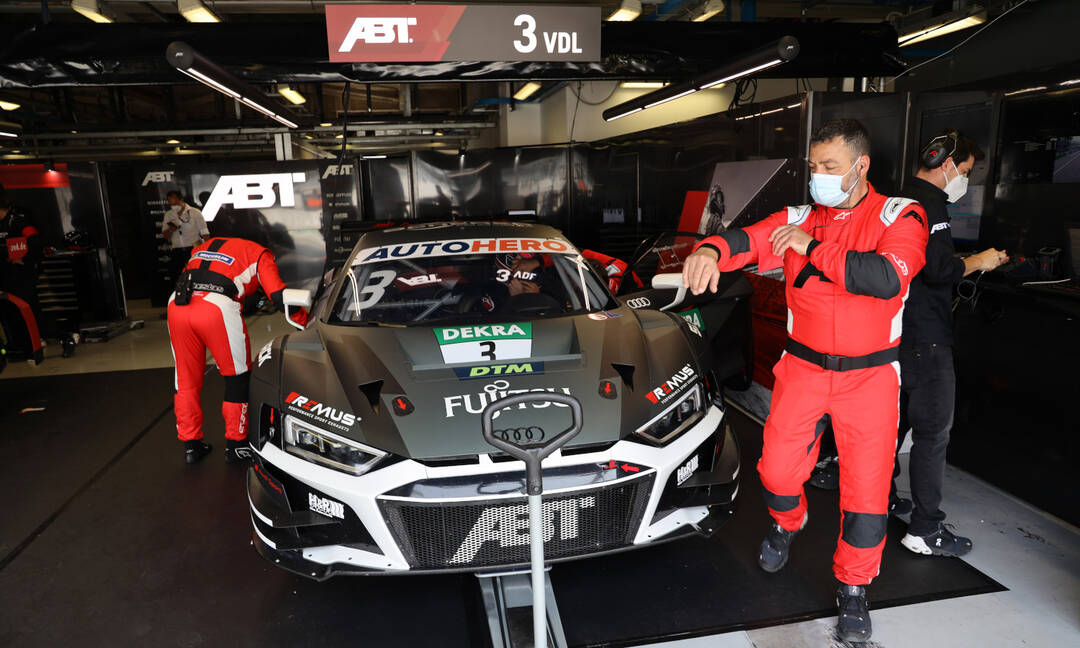 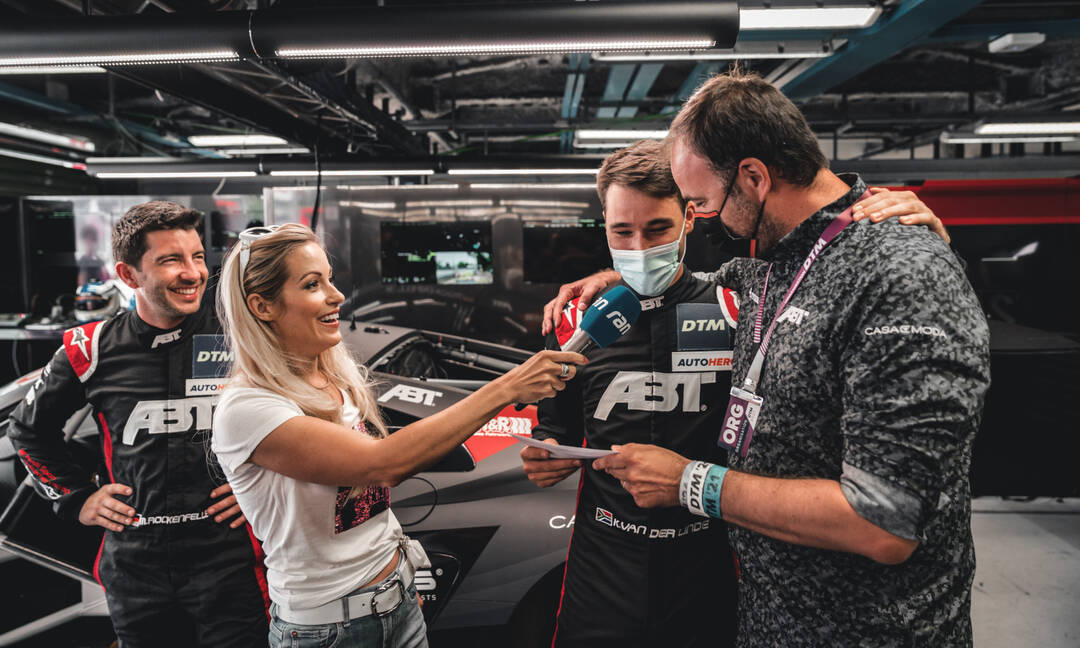 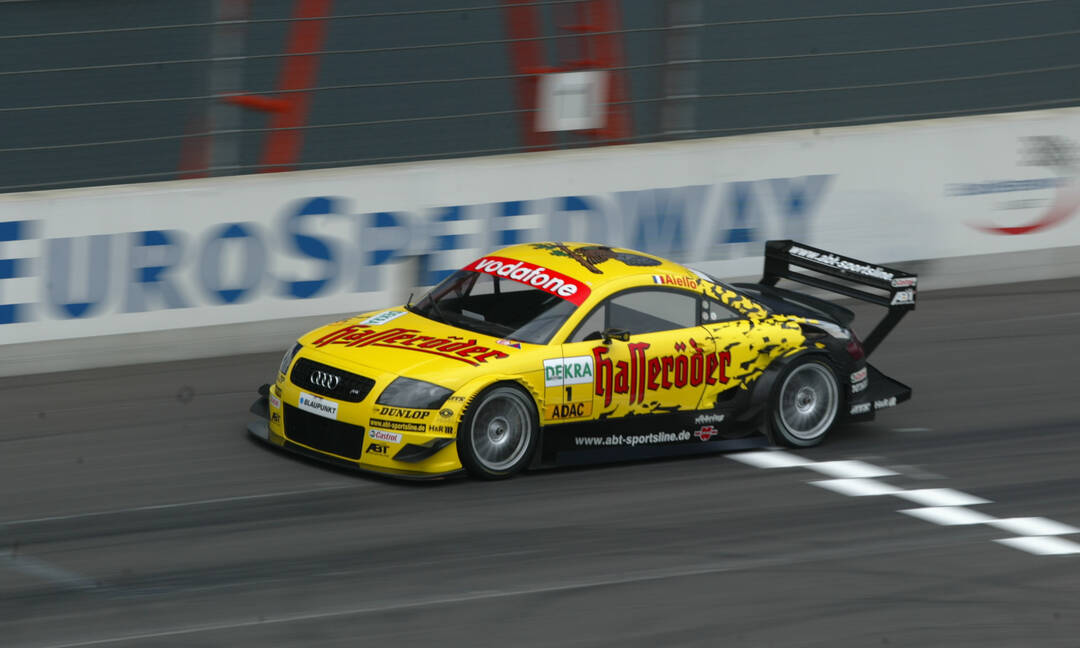 ABT and the Lausitzring: lots of trophies, a few tears and Kelvin van der Linde as the DTM championship leader

Now the Lausitzring is on the agenda (Saturday and Sunday, both races live on SAT.1 and on ran.de from 1 p.m.). The aim: to defend first place in the drivers’ championship and, if possible, to take the lead in the teams’ championship.

The team around Thomas Biermaier and Hans-Jürgen Abt knows how to win DTM races at the Lausitzring. The circuit has been an integral part of the DTM calendar since 2000. ABT has been part of the popular racing series for just as long. The team from Kempten has already celebrated five victories at the Lausitzring and taken 26 podiums in 28 DTM races. But, there are also painful memories.

The premiere in 2000 literally fell into the water. On race day, it rained so heavily that the still fresh asphalt could not absorb the sheer volume of water. After eight laps behind the safety car, the red flag came out.

In 2003, the DTM wanted to use the banking of the tri-oval for the first corner. The team does not have good memories of the track variant, which is also planned for this year: The front right tires of the Abt Audi TT-R driven by Christian Abt and Laurent Aiello burst in quick succession during the first practice session, because they could not cope with the high loads due to the banking. The subsequent impacts against the wall were so severe that the two cars could not be repaired on site and the then Audi juniors, Martin Tomczyk and Peter Terting, had to relinquish their cars for their teammates. For the rest of the weekend, the “normal” track variant was used again.

Mattias Ekström was the main scorer of podium finishes. In 2001, the Swede clinched his first DTM podium at the Lausitzring, when he moved forward from 19th on the grid, after suffering suspension failure in the sprint. In total, the ABT driver stood on the podium ten times at the Lausitzring, twice at the very top (2004 and 2005). Both victories were closely linked to his favorite rival Gary Paffett: in 2004 Ekström was retroactively declared the winner, because the Briton did not have enough fuel in the tank after crossing the finish line.

In 2005, the two title contenders drove bumper-to-bumper around the circuit for practically the entire race. Thanks to a perfect strategy, quick pit stops and an absolutely flawless drive, Ekström managed to keep Paffett behind him.

Miguel Molina (2016) and Nico Müller (2019 and 2020) also took Lausitzring victories for ABT Sportsline. Müller was also part of the closest finish in DTM history: In the second of the total of four Lausitzring races of the 2020 COVID-19 season, René Rast and Nico Müller crossed the finish line side by side in their two Audi RS 5 DTM cars. 0.089 seconds separated the two Audi drivers. The only previous finish that was this close in the DTM was at the Norisring back in 1996.

Close finishes, hard-fought battles and collisions are not uncommon in the DTM at the Lausitzring. In 2007, there was total confusion, because the safety car drove onto the track in the middle of the field after an accident, causing several drivers to gain a lap.

There are also incidents in the very wide pit lane from time to time. In 2006, Mattias Ekström stopped on the penultimate lap after running out of fuel, while he was fighting for another victory. At that time in the DTM, refueling was still done with cans. At the second stop, the ABT mechanics changed the four wheels so quickly that not enough petrol had flowed into the tank in the available time. In 2014, Ekström had to retire due to the left-front wheel not having been fitted properly during the pit stop.

Much worse was an incident in the 2016 season, when one of Edoardo Mortara’s mechanics broke his right foot during a pit stop.

The fact that the pit stops are not without danger in the 2021 DTM was shown at the season opener: On his way to victory in Monza, a mechanic from the neighboring BMW team ran right in front of Kelvin van der Linde’s car in the pit lane, fortunately without any consequences.

Thomas Biermaier (Team Principal Team ABT Sportsline): “In 21 years of DTM, we have already experienced a lot at the Lausitzring. We’ve won a lot of trophies in Kempten, but we’ve also had to take a knock or two. The atmosphere at the Lausitzring is always very special, especially because of the large grandstand opposite the pits. The fans in the region are motorsport enthusiasts and create a great atmosphere. That’s why it was great news that spectators are allowed on the grandstands again this year. We particularly missed them at the Lausitzring last season. We will do everything we can to give them a good show.”

Kelvin van der Linde (ABT Audi R8 LMS #3): “I’m just looking forward to the Lausitzring, especially as the championship leader. It will be a cool new challenge with the first corner on the oval. I think all of the drivers will be a bit nervous before their first laps. It will be a great show and cool racing for the fans. I’m looking forward to seeing how the weekend develops. Our goal is clearly to score good points and defend our championship lead. The test at the Lausitzring was very good. Of course, we need to make a few adjustments for the oval, but I think we’re well sorted.”

Mike Rockenfeller (ABT Audi R8 LMS #9): “The second DTM weekend at the Lausitzring will be a huge challenge. The new regulations mean that you have very few tires for free practice. That alone makes it extremely difficult. You don’t have a chance to prepare for qualifying like you did in the past. For me personally, the biggest challenge is competing in qualifying with the GT3 car. I have to work on that. The Lausitzring is a track that I know well, although the new first corner is a big change. We are all looking forward to this. I hope we have good racing, because normally the first turn was always the best place to overtake. In this form, it’s not there anymore.”

Sophia Flörsch (ABT Audi R8 LMS #99): “I've dreamed of driving in DTM someday since I was a little kid. This dream came true at Monza. Now, the second race is coming up at the Lausitzring, a track I don’t like so much. But, it will be something extremely special, because we won’t be driving the normal version, thanks to the first corner being on the oval. That will be something new challenging and very exciting for all of the teams and drivers. Let’s see how the races go. I’m really looking forward to it. Of course, what we learned in the test is partly invalidated by the new track layout, but I think I’ve made another step in the right direction since Monza. I’m excited to see how it will be. It’s also cool to have fans at the track again.”

... Kelvin van der Linde’s victory in Sunday’s race at Monza was the 68th triumph for Team ABT Sportsline in the DTM?

... the ABT Audi R8 LMS driven by championship leader Kelvin van der Linde is equipped with onboard cameras at the Lausitzring?

... Sophia Flörsch drove demo laps with the ABT Audi R8 LMS during the Formula 1 race at the Red Bull Ring?

... Kelvin van der Linde travelled directly to Spa for testing after his victory at Monza? During the weekend after the Lausitzring, the DTM championship leader will be contesting the Spa24 Hours in an Audi R8 LMS.

... the ABT Sportsline team tested at Zolder and at the Red Bull Ring between the season opener at Monza and the Lausitzring?

... Mike Rockenfeller went on a short holiday with his family to Sonnenalp in the Allgäu region last week?

... ABT Sportsline is also competing in Formula E in London this week at the same time as the DTM at the Lausitzring?

Three questions to Johannes Remmele, owner of the new ABT partner Südpack

After the successful start to the season at Monza, ABT Sportsline is still on course for success in the DTM. The team from Kempten is supported by a new partner: the film and packaging manufacturer Südpack.

Mr Remmele, Südpack is taking part as a new ABT partner in the DTM. How did this partnership come about?

The automotive industry is currently in a state of flux. In the development and production of cars, new materials, especially composites made of various plastic materials, play a large and decisive role. This is the case both in motorsports and in e-mobility. And we, as one of the leading film manufacturers, see an opportunity here to contribute our expertise from the food sector. At our plant in Schwendi, we will offer the automotive industry the chance to use their compounds in the future. In other words: We offer an attractive opportunity to manufacture cars easily and effectively. For this, we need partners. Strong, reliable partners. Like ABT Sportsline. ABT has been one of the most successful racing teams in motorsport for decades. And time and again, they skillfully transfer this experience to the road. We can benefit from this knowledge advantage and their contacts.

What is special about the DTM?

On the one hand, of course, there is the adrenaline, the speed. Real racing. On the other hand, the fans play an important role. They create the right atmosphere at every race event.

Your first appearance was at Monza and that saw a victory for Kelvin van der Linde in Sunday’s race. What do you say about such a debut?

I was totally thrilled! It’s our first time on the grid and then a win straight away. What could be better? A successful start, because ABT and I have one thing in common: we don’t like to drive behind anyone else.

Virtual Meet & Greet with Sophia, Mike and Kelvin via Zoom