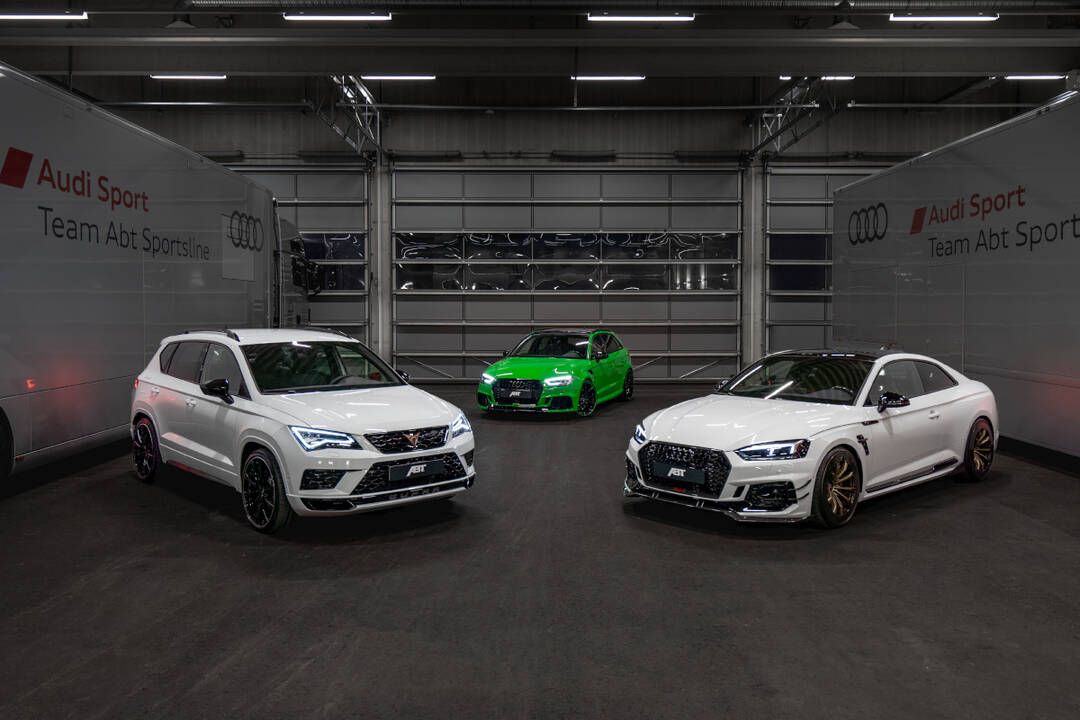 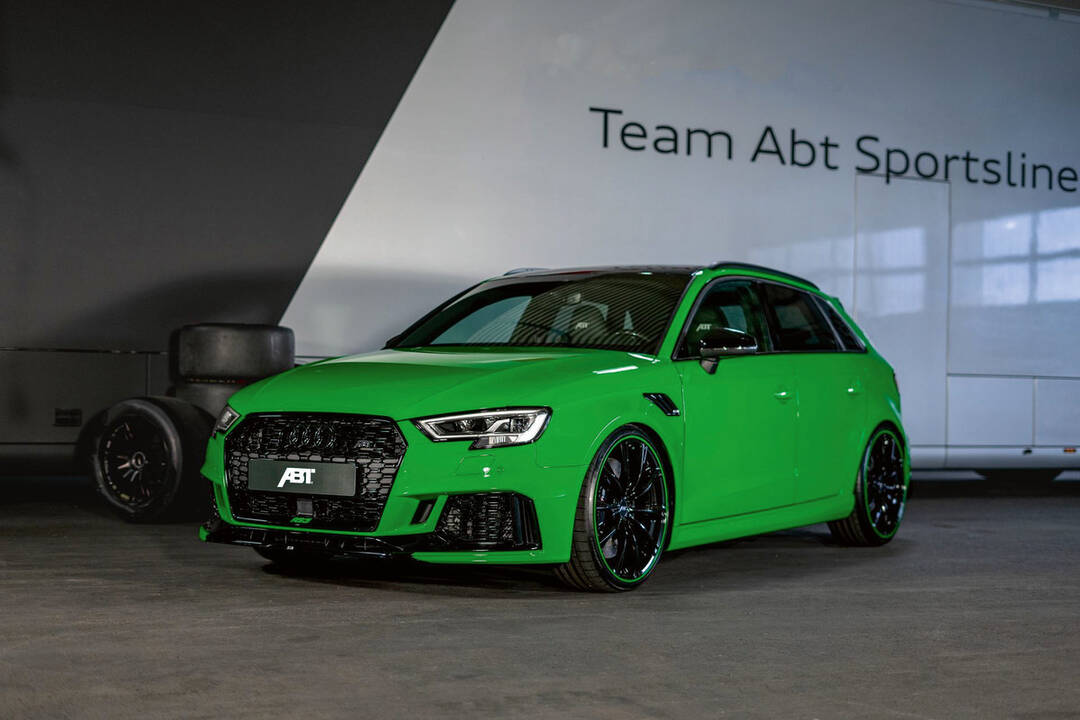 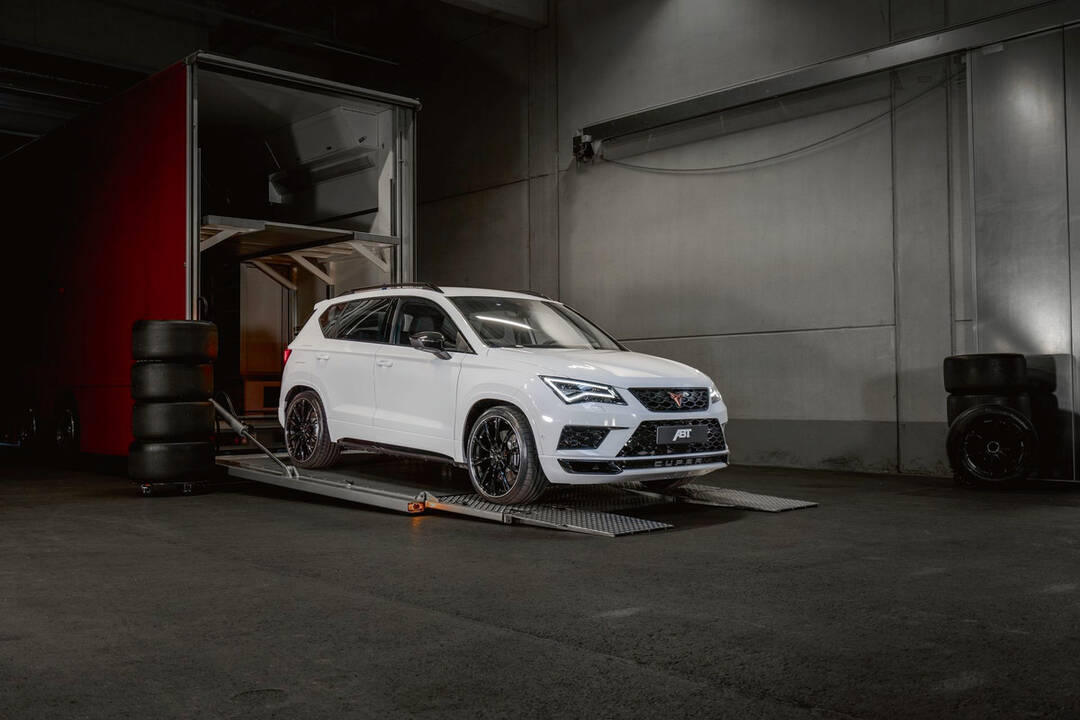 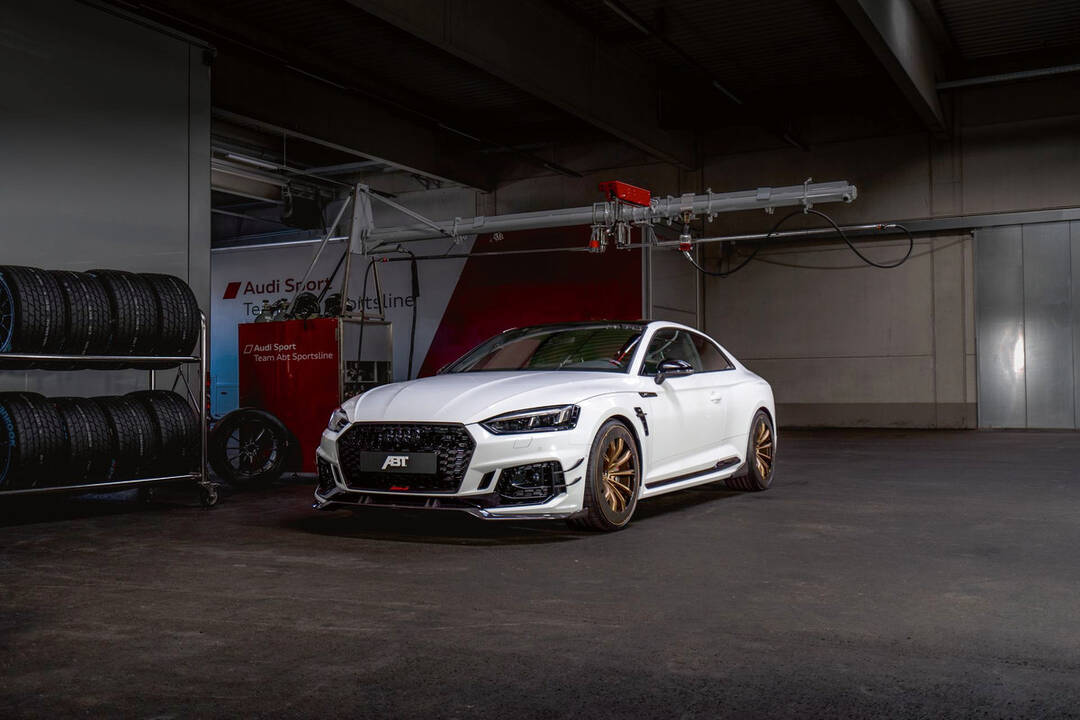 At the German Essen Motor Show 2018, the CUPRA Ateca ABT will be presented to the public for the first time. ABT Sportsline will also show two top models from its own portfolio at the joint stand from tyre manufacturer Continental in Hall 3, No. 3A41. The viper green ABT RS3 with up to 500 HP and the glacier white ABT RS5-R with 530 HP, limited to only 50 units, will represent the core segment. The ready-to-run prototype ABT RS6-E with an output of 1,018 HP can also be found in Essen at Stand 3A25 of the magazine AUTO BILD SPORTSCARS in Hall 3. In addition to the enhanced V8 petrol engine, an electric motor was installed in the RS6's cardan tunnel. Want even more ABT Sportsline? At the stand of suspension partner H&R (Hall 7, No. 7A10), a very special Golf VII GTI Clubsport S could also be found, in which the Bavarian tuner was involved.

A powerful strike: viper-green ABT RS3 with up to 500 HP

On some snakes, the color already serves as a warning to keep your distance – regardless of their size. At the Essen Motor Show 2018, the ABT RS3 uses its viper-green color to signal that compact cars deserve some respect as well. With the ultimate ABT Power R performance kit, the car boasts 500 HP (368 kW) and a maximum torque of 570 Nm. In addition to the auxiliary ABT Engine Control (AEC) unit, an ABT intercooler and the ABT exhaust system are also on board. The production model has 400 HP (294 kW) and 480 Nm.

With ABT suspension springs and ABT sport stabilizers, the ABT RS3 perfectly brings the power of the 2.5 liter, 5-cylinder in-line engine onto the road. The ABT height-adjustable suspension kit is available as an option. Visually, the ABT RS3 is always in the green with its outfit: The car in the picture is fitted with 20 inch ABT SPORT GR. Other 19 and 20-inch sizes are available as alternatives – ER-C, ER-F and FR.

When it comes to the design, ABT Sportsline did not miss the opportunity to complement the car with a number of additional aerodynamic elements and interior upgrades to make it stand out. The ABT RS3 now features a front lip add-on, a front grille add-on with RS3 logo, the ABT fender inserts and the glossy black ABT rear skirt set including tailpipe shaft and ABT muffler system with two 102 mm double pipes in matt black. For the interior, the Bavaria-based company offers different finishing upgrades in carbon fiber and integrated entrance lights with ABT branding, a gearshift lever badge, and the start/stop button.

With its brilliant appearance, the ABT RS3 could stop large crowds not only at exhibitions. The car itself has no problem with stopping – especially not if the optional ABT brake upgrade kit with its gigantic 380 mm discs is installed.

Even in extreme cases, glaciers only move a few kilometers per year. The innocent glacier-white paint of the ABT RS5-R is therefore a serious understatement. After all, the exhibition car at the Essen Motor Show in Germany reaches 280 km/h and catapults itself from 0 to 100 km/h in 3.6 seconds. As a comparison: the standard model is limited at 250 km/h and takes three tenths longer for the same sprint. The ABT RS5-R, which is limited to 50 vehicles, delivers substantial extra performance compared to the basic model. The power is increased from 450 HP (331 kW) to 530 HP (390 kW), while the maximum torque grows from 600 to 690 Nm. The ABT Power S performance level is based on the auxiliary ABT Engine Control (AEC) unit, an additional water cooler and the ABT muffler system. “On the ABT RS5-R, we get an additional 80 HP and 90 Nm from the 2.9 liter biturbo V6,” CEO Hans-Jürgen Abt explains proudly.

The cleverly tuned exhaust system from ABT Sportsline is part of the emotive driving experience. With four 102 mm carbon tailpipes, it provides an attractive look and a charismatic V6 sound. To ensure that not only the sound performance is right, the tuner also installs ABT sports stabilizers and ABT height-adjustable suspension springs. The full ABT height-adjustable suspension kit is available as an option.

On the vehicle body, the new ABT front lip, the ABT front flics and the ABT front grille frame with RS5-R logo are eye-catching features. The flanks are dominated by ABT wheel arch vents with aggressive fins. The ABT rear skirt add-on and the ABT rear spoiler are the crowning glory. Almost all attachment parts are made from real visible carbon fiber. The design is completed by 21-inch ABT SPORT GR rims. And of course the interior also features individual touches. In the sum of all parts, the ABT RS5-R is a complete work of art that has to be experienced live.

The CUPRA Ateca is the first own model of the new SEAT brand. The "SUV with the heart of a sports car" tempts buyers with a power of 300 HP (221 kW) and 400 Nm. So it is not only the so-called "hot hatches" that should prepare for competition on fast roads. After all, it masters the sprint from 0 to 100 km/h in just 5.2 seconds and reaches a top speed of 245 km/h. And if that is not enough, there is potential for more. ABT Sportsline was involved in the development of the sporty SUV from the start and will present the CUPRA Ateca ABT for the first time at this year's Essen Motor Show in Germany. After the upgrade, it now offers 350 HP (257 kW). Incidentally, the associated performance curve bears a strong resemblance to the side of the Pico del Teide, Spain's highest volcano. The torque progression is more of a high plateau: an impressive 440 Nm are active between 2000 and 5200 rpm.

The CUPRA Ateca ABT will be presented to the public at the Essen Motor Show from December 1 to 9, at the joint stand 3A41 with Continental in hall 3, where the vehicle tuner traditionally exhibits. Another specimen of the CUPRA Ateca ABT will be shown at the same time at the SEAT Partner Dialog in Berlin and the subsequent CUPRA X event. Guests can look forward to a real highlight, which was tweaked in several areas. ABT lowering springs ensure that the SUV keeps its line as precisely as the Spanish high-speed trains, which travel in the world's second longest corresponding rail network.

To push the CUPRA Ateca ABT to its limits, though, German autobahns are still the first choice: it tops out only at 255 km/h – 10 km/h later than the production model. The acceleration is even more impressive, as it is in a range that was previously only occupied by purebred sports cars. The world's largest tuner for vehicles from the Volkswagen and Audi Group reduces the standard sprint from 0 to 100 km/h by two tenths, putting an even 5.0 seconds on the data sheet. And when someone runs that fast, they deserve some new boots: The CUPRA Ateca ABT is therefore fitted with 20-inch ABT SPORT GR wheels. The design features ten spokes which bisect towards the rim flange, a recessed hub area and a strongly concave rim base. After all, this SUV should display its special status from the outside at all times.

Gasoline engine with a boost of electricity: ABT RS6-E with 1,018 hybrid HP

At the beginning, alternative drive concepts were demonized as “spoilers of driving fun” but today they offer a lot of exciting prospects for tuners. This can be seen by the many exhibits at the Essen Motor Show 2018 in Germany. An especially gripping example of this, is the roadworthy prototype ABT RS6-E, which combines the best of both worlds: A considerably charged V8 gasoline engine meets an additional electric motor – Hybrid technology at its best! The car, which is based on an already-tuned ABT RS6, pushes technical limits thanks to its system power of up to 1,018 HP and 1,291 Nm. The engineers installed an additional electric motor in the transmission tunnel to bring an extra boost to the rear axle at the push of a button. And just how powerful that can be, is demonstrated by racer Daniel Abt in a video in which he introduces the RS6-E and pushes the “magic button” for the first time: https://youtu.be/Pxak7Xqwphk

The ABT RS6-E already impresses with the key figures of the internal combustion engine, which itself offers 730 HP (537 kW). The difference to the 560 HP (412 kW) standard engine is made possible by the ABT Engine Control (AEC) unit developed in-house and the modified exhaust system. This performance package is already available to buy as ABT Power R. The prototype has more to offer, though. If the driver wants to take the car's acceleration to the max, electric power can be additionally used above 100 km/h. This releases an additional 288 HP (213 kW) and 317 Nm torque for a brief period. As the additional power is only activated when needed, a compact battery with a capacity of 13.6 kWh is sufficient.

ABT Sportsline received impulses for the ambitious project from its own department for electric mobility, ABT e-Line, and from motorsports. Among other things, the company is in charge of the Audi vehicles for Formula E. The RS6-E prototype preempts the change expected for the tuning sector which could result from the increasing popularity of hybrid vehicles and alternative drives.

But the special prototype also impresses visually, for example with a futuristic vehicle film wrap reminiscent of the design of a printed circuit board. This is also reflected in the AERO rings, which are a special feature on the 21-inch rims of type ABT Sport GR. The comprehensive ABT aerodynamics package in the normal product range includes front lip, front skirt add-ons, mirror covers, wheel arch vents, side skirts, rear skirt add-ons, as well as rear spoilers. KW height adjustable suspension springs ensure appropriate lowering of the chassis, allowing the driver to stay in control of the 1,018 HP at all times.