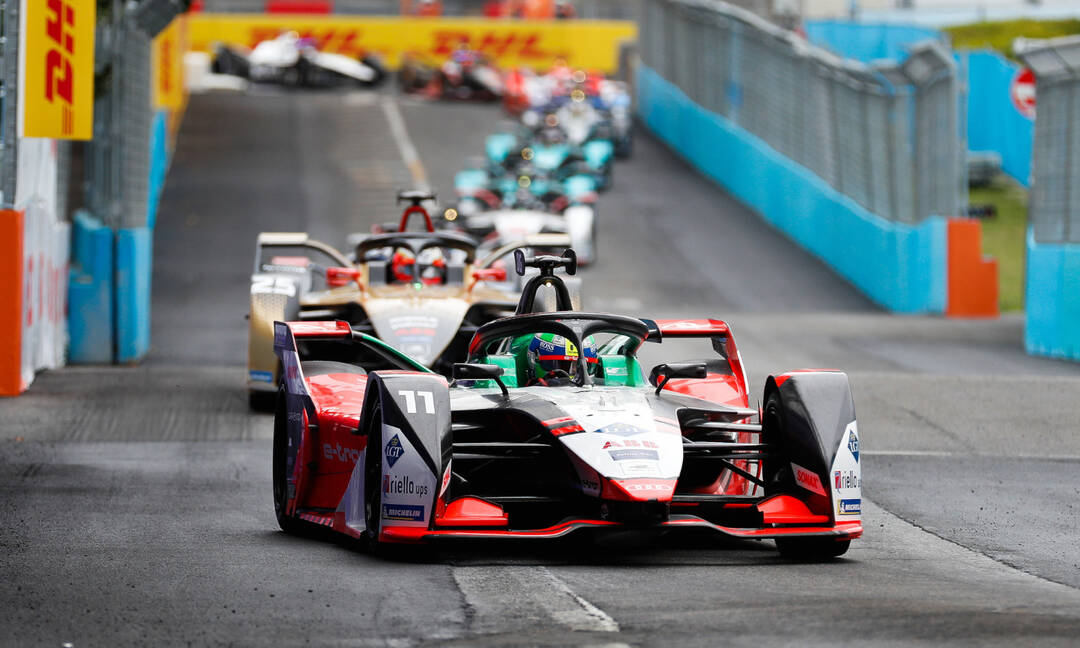 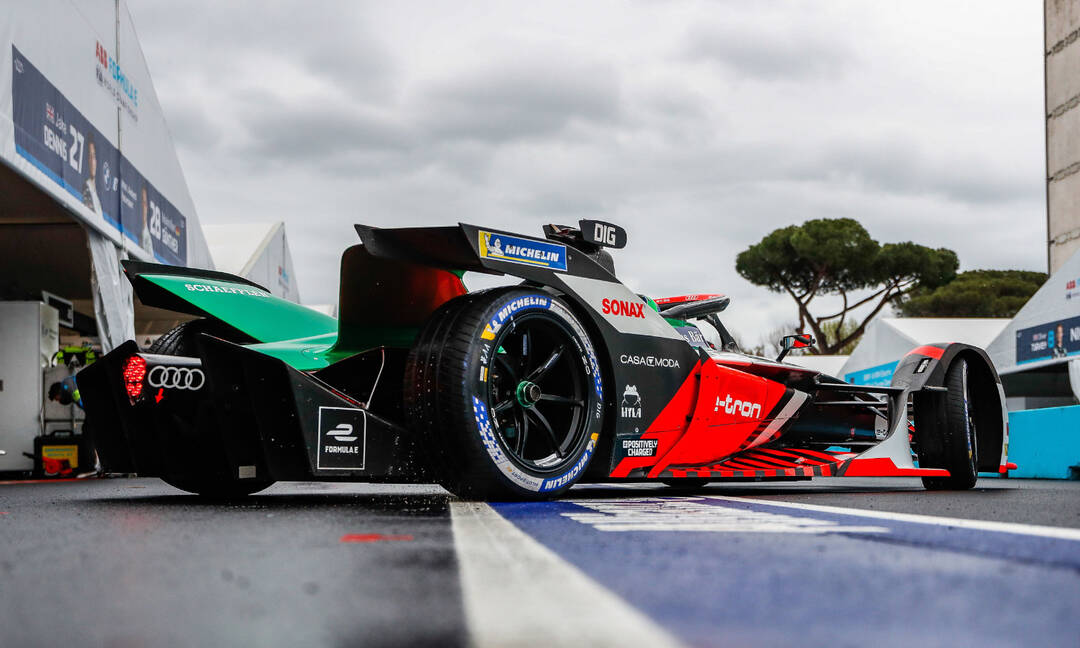 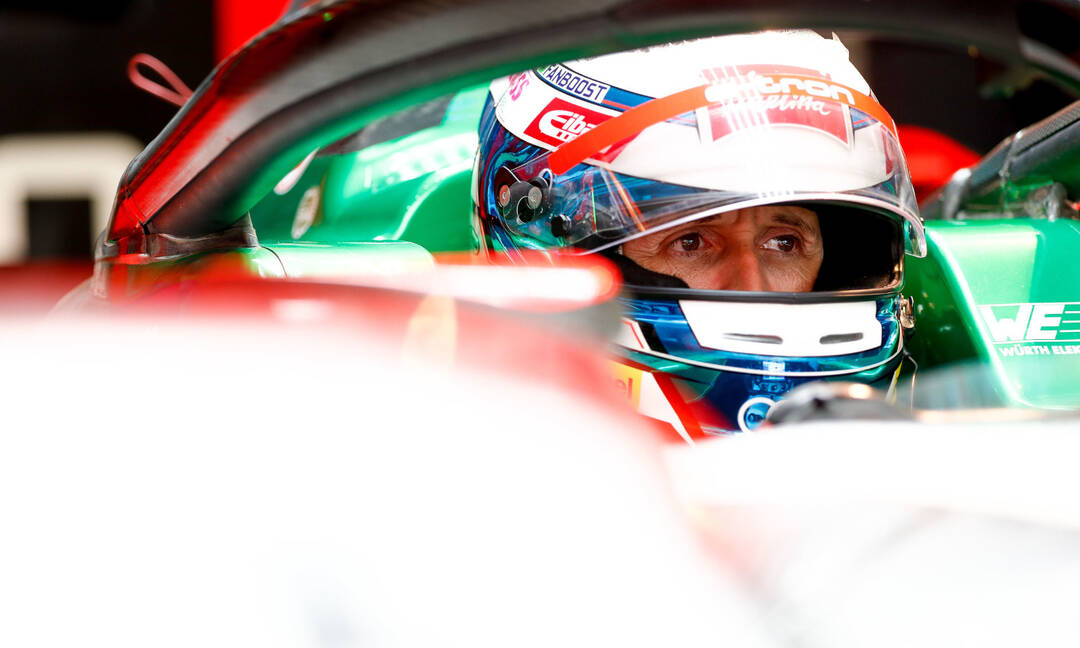 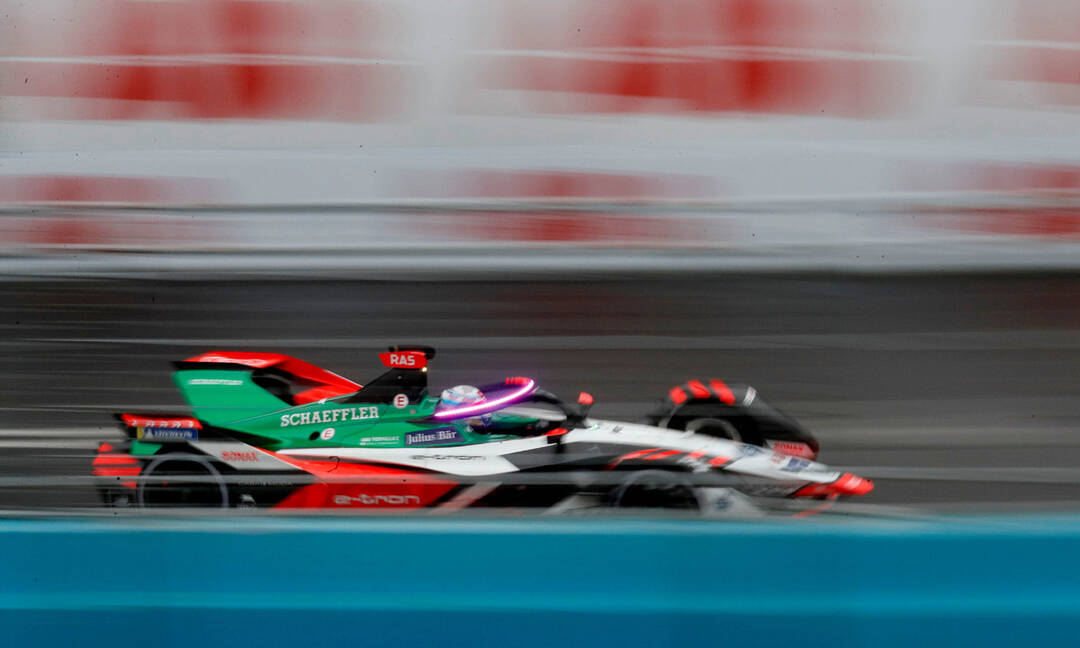 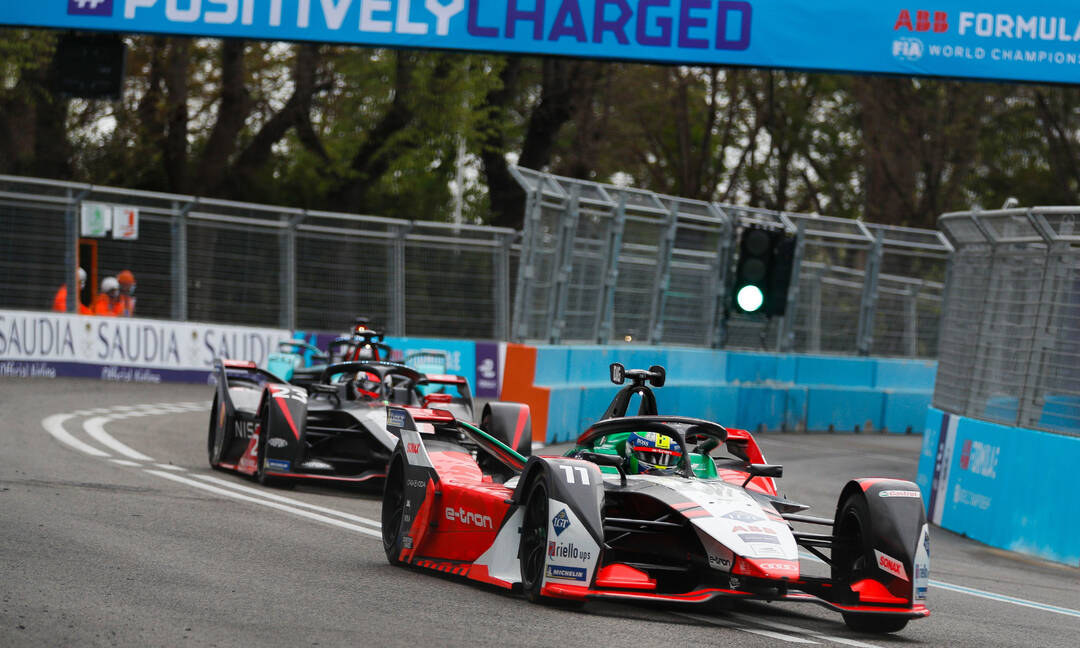 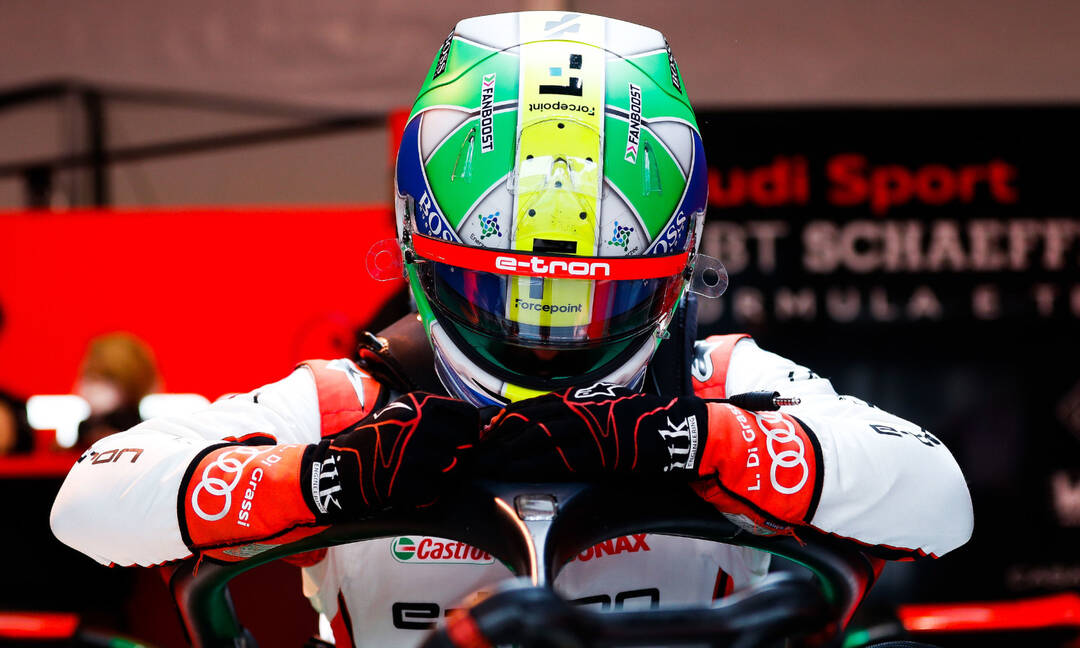 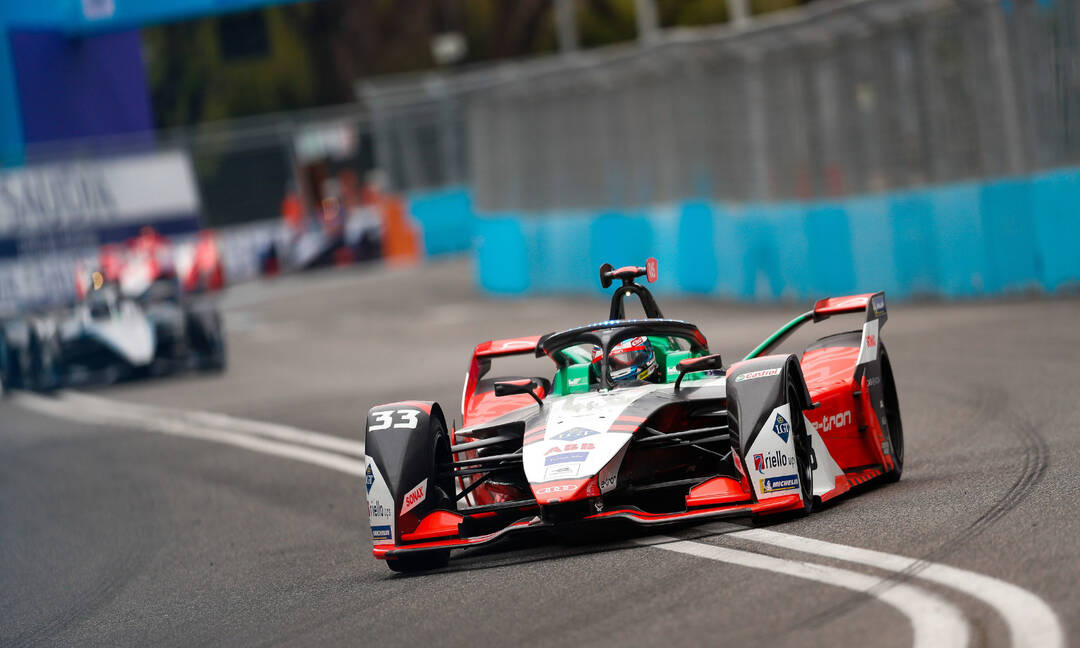 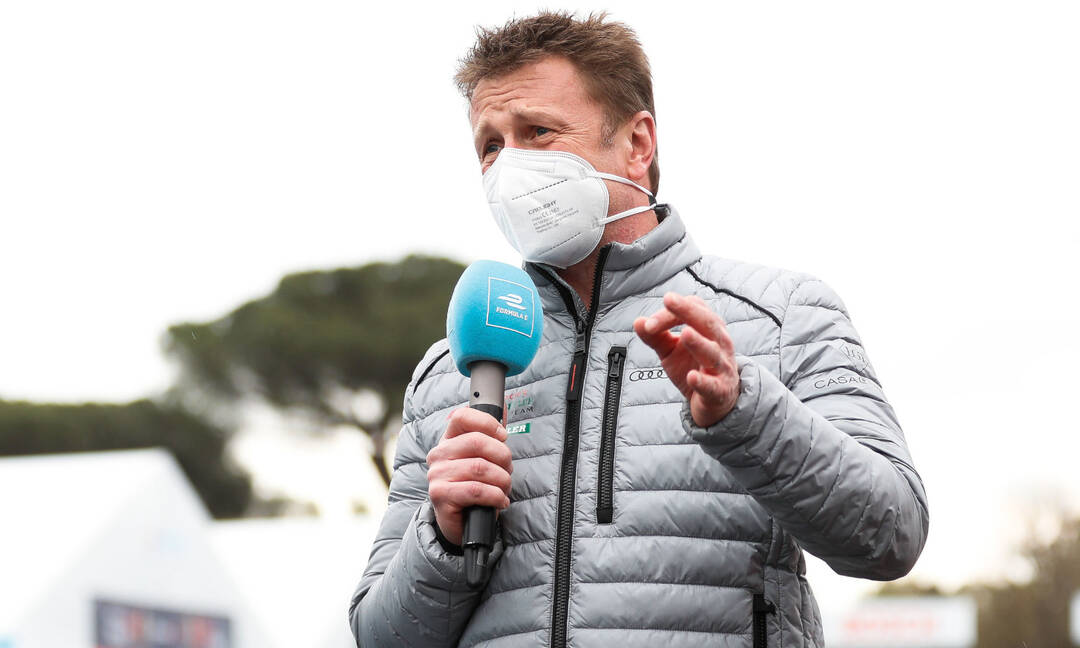 The third round of the ABB FIA Formula E World Championship in Rome (Italy) was five minutes too long for Lucas di Grassi: leading the race and already eyeing victory, the Brazilian from the Audi Sport ABT Schaeffler team came to a stop without drive three laps from the finish. His teammate René Rast moved up from 20th on the grid to sixth. But the team was also followed by bad luck on Sunday.

“Our car is fantastic,” said Lucas di Grassi ahead of the first European weekend of the new Formula E season. The Audi factory driver underlined his statement by setting the fastest time in the first free practice session and fourth place on the grid. In the spectacular E-Prix on the redesigned circuit in the Italian capital, the entire field remained close together. Di Grassi took the lead early on and kept the upper hand in numerous fierce battles. The deserved victory was within his grasp, but the Brazilian suddenly slowed down and had to park his Audi e-tron FE07 with only five minutes remaining.

“A mechanical problem so close to the end of the race is tough,” said di Grassi. “For the mechanics, for the engineers and for me. We had the speed to win the race today. I was leading the race for most of the time and had great overtakes.”

Teammate René Rast already hurt his chance for a podium in qualifying. After making slight contact with a wall, the German was unable to complete his timed lap. With a faultless race, the three-time DTM champion fought his way up into the points. “When you start from 20th on the grid, you have to be happy with sixth place,” said Rast, who is also sixth in the overall Formula E drivers’ standings. “It was a cool race, I had a lot of fun, the car was fast. Tomorrow we have to be better in qualifying, then we’ll fight for the podium.”

“René drove a clever race, his crew supported him perfectly with the right strategy,” said Team Principal Allan McNish. “We are happy about that, but the fact that we missed a victory so narrowly today hurts a lot. Lucas had a fantastic fight at the front with Jean-Eric Vergne and was leading the race with five minutes to go. Hearing the message over the radio that he had no drive was extremely hard for all of us.”

However, the team did not have much more luck on Sunday. A wet qualifying session early on Sunday morning already went anything but as hoped for Audi Sport ABT Schaeffler. Sixth in the drivers’ standings, René Rast had to take to the track in the first group, a huge disadvantage for the German: “After our group went out, the rain eased off. In the end, the track was almost ten seconds faster than in our group.”

Rast subsequently had to settle for 19th on the grid. Teammate Lucas di Grassi experienced slightly better conditions in his qualifying group and started from 13th. The Brazilian quickly worked his way up into the points in the race, before he was hit in the back by Sébastien Buemi on a straight on lap eight and violently crashed into the barriers. “This was a very dangerous move,” said di Grassi.

As on the previous day, René Rast showed an impressive comeback drive that brought the reigning DTM champion up into the top ten. Four laps before the end of the race, the German clipped the wall, causing the right rear suspension to break, resulting in Rast also hitting the wall. “I had a moment of oversteer out of the last corner,” said Rast. “A small mistake with a huge consequence, but actually my day was only going to be tough after the bad luck with the weather in qualifying.”

“Losing both cars due to accidents is extremely bitter,” said Team Principal Allan McNish. “The situation that led to Lucas’s retirement was disappointing where the video looked like Sébastien caught Lucas at the rear and spun him into the wall. René made a small mistake that led to his retirement. The most important thing is that both remained unhurt, because both experienced quite hard impacts. It is annoying that the final race result again remained below our potential here. As in Diriyah, we had one of the fastest cars in the field.”

Formula E continues with another double header in a fortnight at Valenica in Spain.