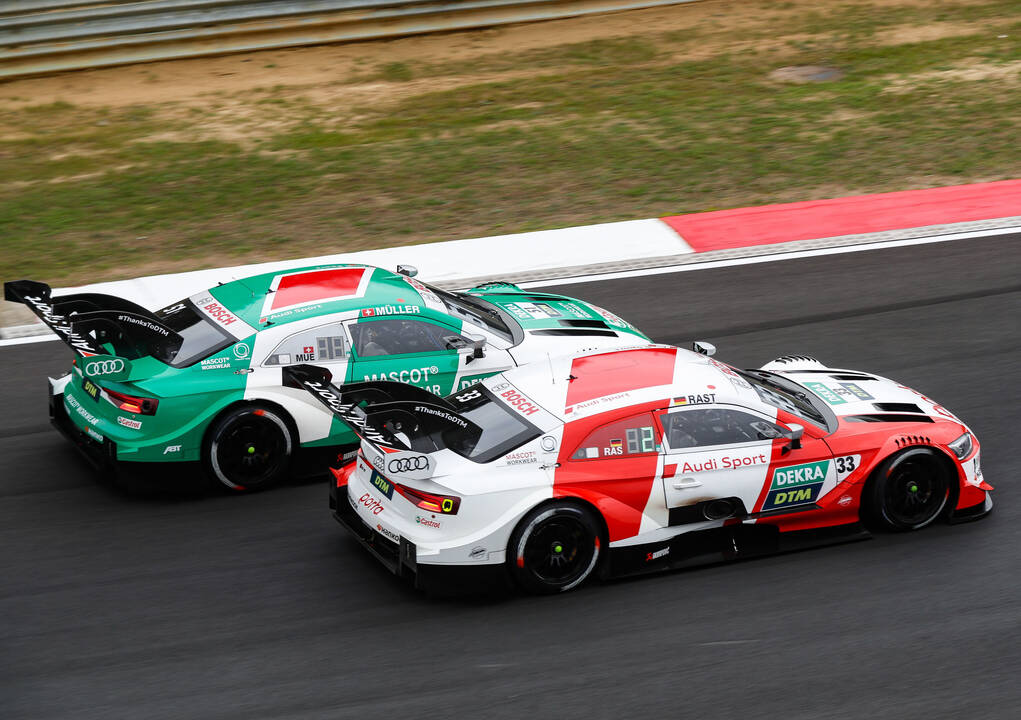 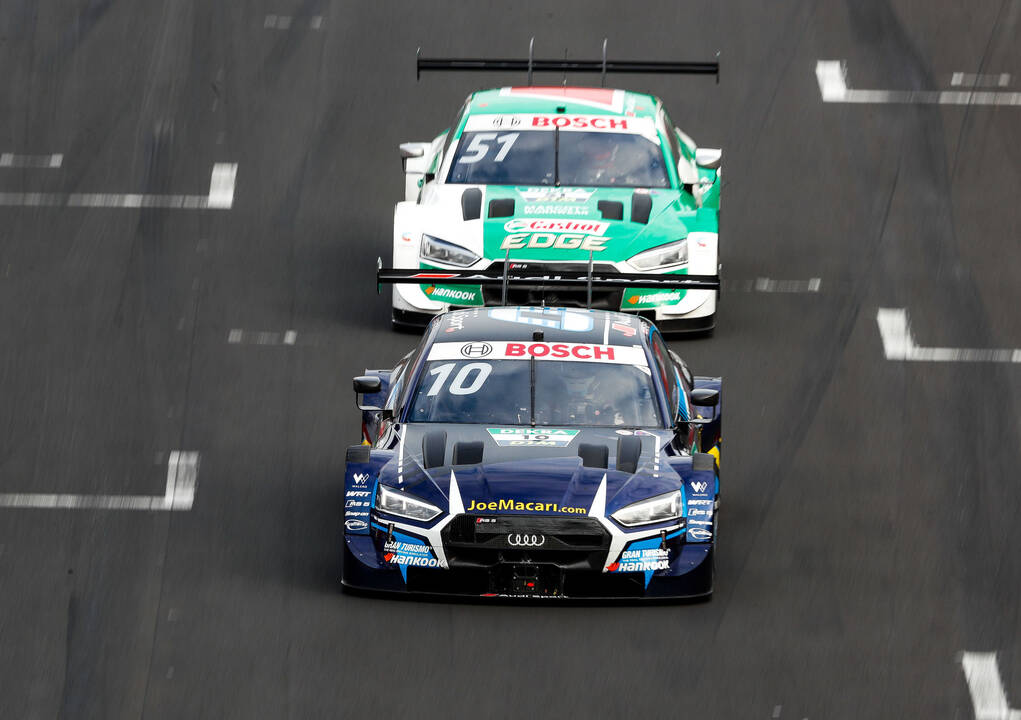 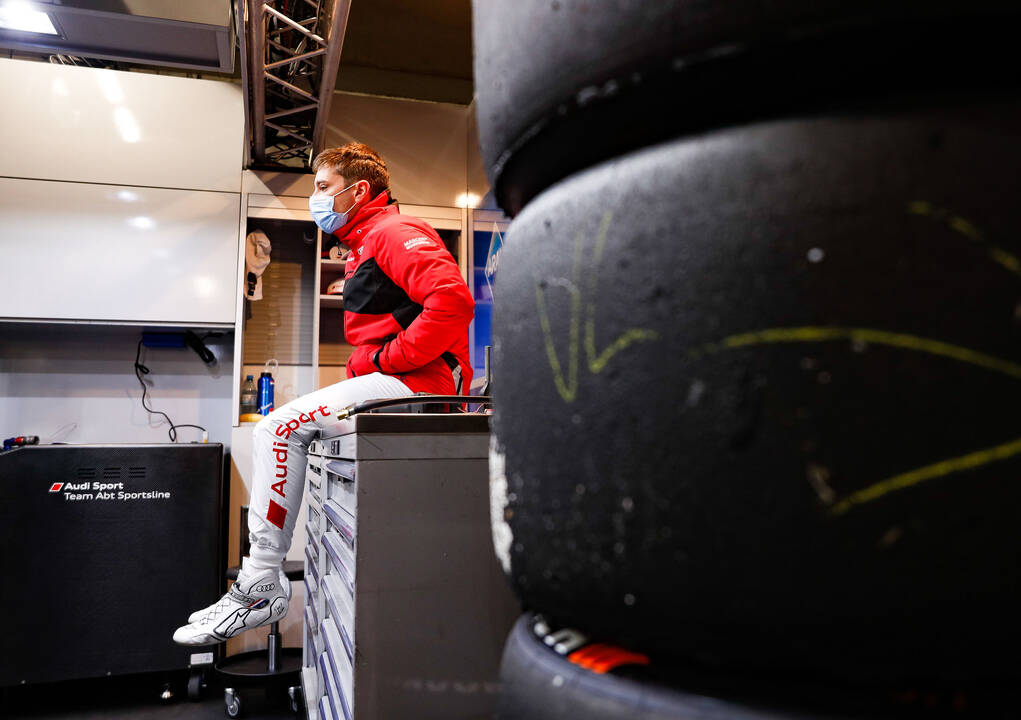 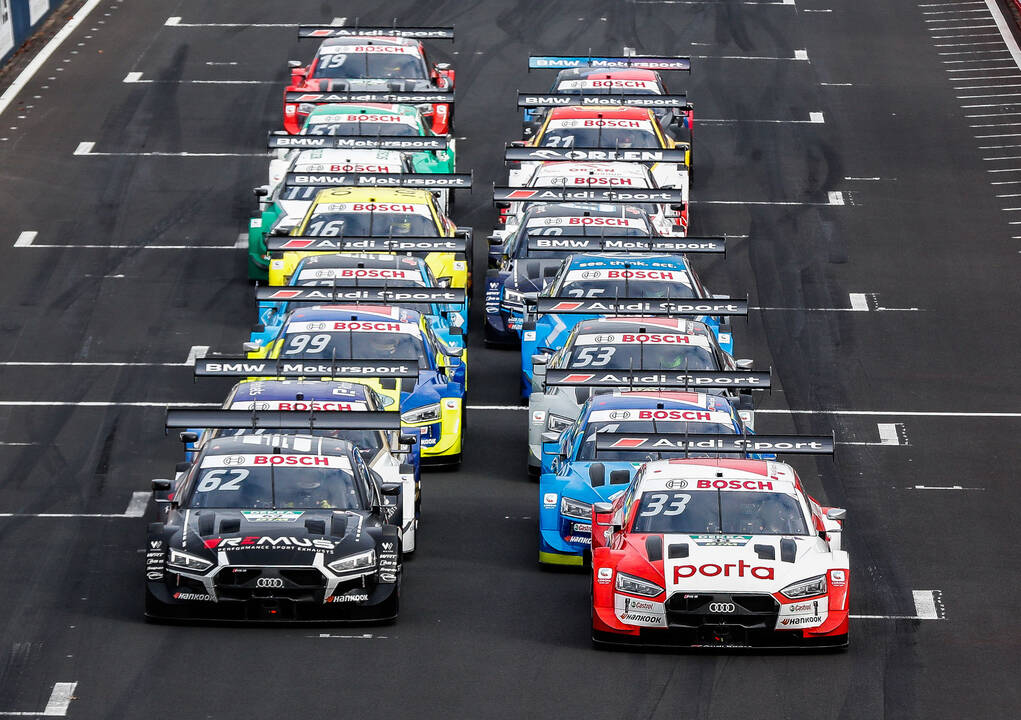 Thriller in the DTM: After his fourth consecutive victory, René Rast from Audi Sport Team Rosberg has turned a 47-point deficit into a 19-point lead within nine days and has taken the lead in the overall drivers’ standings. But with his second place, Nico Müller kept his chances of winning the title alive.

Saturday: Frijns had lost valuable points last weekend due to an accident at the pit exit. Because of the fact that his car caught fire afterwards, Audi Sport Team Abt Sportsline had to completely rebuild the Audi RS 5 DTM on site. “The guys did a great job,” said Frijns. “I was faster than René at times in the race, but circumstances were against us today. After the safety car restart, I wanted to overtake (Ferdinand) Habsburg, but René was clever to make sure that I stayed behind Habsburg. After my pit stop, I attacked René, but he had push-to-pass and DRS available, because there were two other cars in front of us, so he was able to fend off my attacks.”

Teammate Nico Müller suffered another setback in the title fight. The Swiss couldn’t do better than eighth in qualifying. The previous leader of the standings was pushed wide on the opening lap, dropping him to the second-last position. After an early pit stop, Müller moved forward to sixth place, but still lost the lead of the drivers’ standings to René Rast. “It’s unbelievable that you can have so much going against you in such a short period of time,” said Müller. “Today was another day like this. The qualifying session didn’t go well. And as if that wasn’t enough, I was bowled away in the second corner and was then running at the back of the field. After that, it was the right decision to come in early. With this, I was able to make up some positions, but I couldn’t get past Fabio (Scherer).”

In the Sunday turbulent race, in which only ten cars crossed the finish line, Rast had to fight hard for his sixth victory of the season, especially during the opening laps. After two Indy restarts, Rast managed to fend off all of the attacks from his fiercest rival for the title, Nico Müller from Audi Sport Team Abt Sportsline. Rast also successfully countered an undercut by Müller, who came into the pits one lap before him. After his pit stop, Rast not only remained in front of the Swiss, but he also returned to the track ahead of Ferdinand Habsburg, who had led the race up to that point.

With second place, Nico Müller kept his chances of winning the title alive. From fifth place on the grid, the Swiss immediately moved up to third. However, unlike Rast, he was unable to drive in open air after his pit stop. “It was particularly frustrating that Jamie (Green) put up such a massive fight on cold tires, which was unnecessary,” said Müller. “For the finale at Hockenheim, it’s now ‘all-in!’ It is a track from which I have very good memories. I clinched my first pole position in the DTM there and won the final race last year. I don’t see why we shouldn’t be able to make René’s life difficult there.”

With a gap of 41 points, Müller’s teammate Robin Frijns now only has an outside chance for the title. The Dutchman was taken out of the race through no fault of his own in a collision between BMW driver Jonathan Aberdein and Fabio Scherer. “I had overtaken Fabio shortly before the accident and didn’t even realize what was happening behind me,” said Frijns. “All of a sudden, I felt a hard hit and the race was over. It is very disappointing.”

“I have mixed feelings today,” said Head of Audi Motorsport Dieter Gass. “Of course, we are happy about the 1-2 victory with René and Nico, another fantastic result for Audi. But, I feel very sorry for Ferdinand Habsburg and Robin Frijns. Habsburg displayed a fantastic performance in qualifying, for which he was unfortunately not rewarded in the race. Robin could also have clinched a good result if he hadn’t been taken out of the race through no fault of his own.”