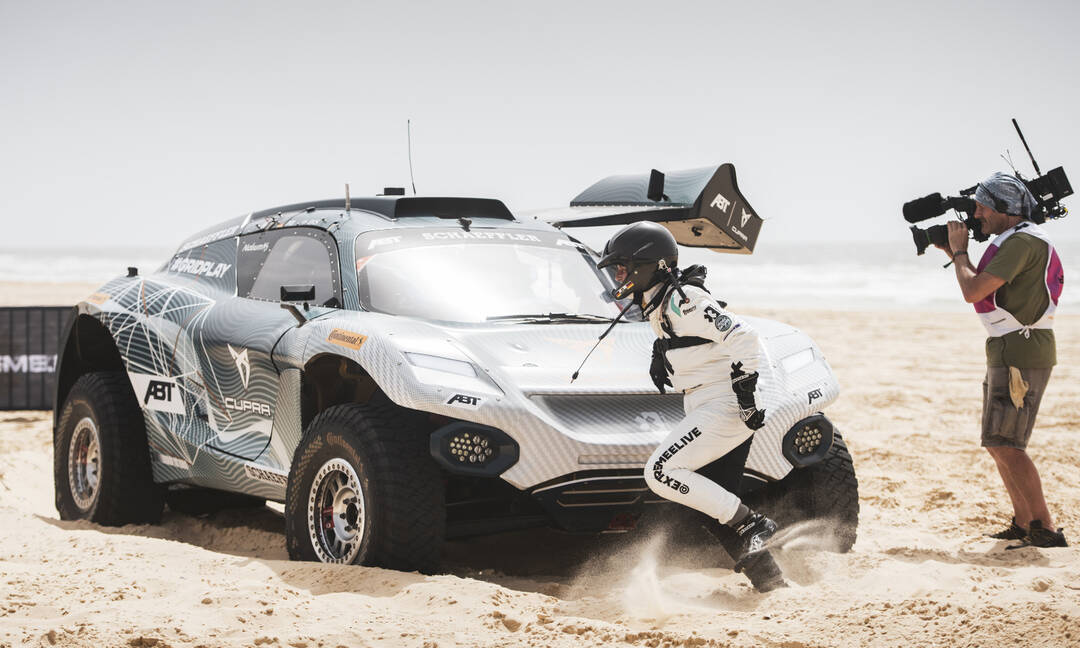 Spectacular motorsport in the dunes of Senegal: At the second appearance of the Extreme E, this time on the West African Atlantic, the ABT CUPRA XE team collected further valuable championship points with a fifth place and caused more than one sensation on the track: The team from Germany missed the final of the top four by only nine tenths of a second in an exciting semi-final.

After a difficult start to the new all-electric racing series during the season opener in Saudi Arabia in April, the next challenge awaited the team at the famous Lac Rose: Claudia Hürtgen, the regular driver at Mattias Ekström’s side, had to pull out due to illness. She had already not felt well after waking up on Friday morning, but still fought her way through the day, completed the shakedown and the free practice, but was then no longer able to take part in the weekend.

The team sent best wishes for recovery and at the same time welcomed a prominent substitute driver: Jutta Kleinschmidt, who exactly 20 years ago crossed the finish line of the legendary Dakar Rally, just 300 metres away from the paddock, as the first and so far only female winner. “I’m really happy to get this chance in this team and to compete in a real race again after many years,” said Kleinschmidt, who was doing her seat test in the e-CUPRA ABT XE1 on Friday evening. “I have a lot to learn and I am grateful for the support of Mattias and the whole team.”

Too much of modesty. From the first lap of qualifying on Saturday morning, Jutta Kleinschmidt was one of the fastest women in the field, earning the utmost respect from fans, media and competitors within hours. “I’m impressed how quickly Jutta got used to our car and all the procedures – that’s a lot of fun,” said Mattias Ekström. The Swede delivered another stellar performance in Senegal and led ABT CUPRA XE all the way to the first, strongly contested semi-final. There, too, Ekström handed over the race car in the lead to Jutta Kleinschmidt, who lost a few seconds during the driver change due to a problem with the radio. Although the German fought her way back on the six-kilometre circuit and even set the fastest lap time of the female rivals, she still had to admit defeat at the finish by just nine tenths of a second.

“At the moment I am terribly annoyed, because we would have had the best chances for the final and thus also for a podium place,” said Jutta Kleinschmidt. “But it’s outweighed by gratitude for the surprise of having been part of this team and this championship this weekend.”

“This weekend Extreme E showed its true colours for the first time with spectacular wheel-to-wheel duels,” said Mattias Ekström, who showed all his experience and coolness especially in the direct semi-final duel with nine-time World Rally Champion Sébastien Loeb and three-time World Rallycross Champion Johan Kristoffersson. “We can be disappointed today because much more would have been possible. But we also know about the real strength of our car by now at the latest – that makes us very keen on the next race.”

The next Extreme E event is scheduled in exactly three months, the so-called Arctic X Prix in Greenland. Around Kangerlussuaq, where the effects of climate change on the world’s glaciers can be observed in a particularly impressive way, ABT CUPRA XE will then fight for the first trophy of the premiere season.