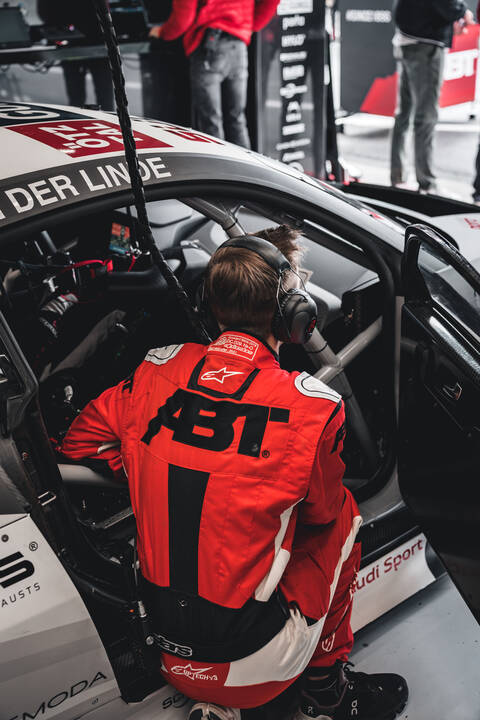 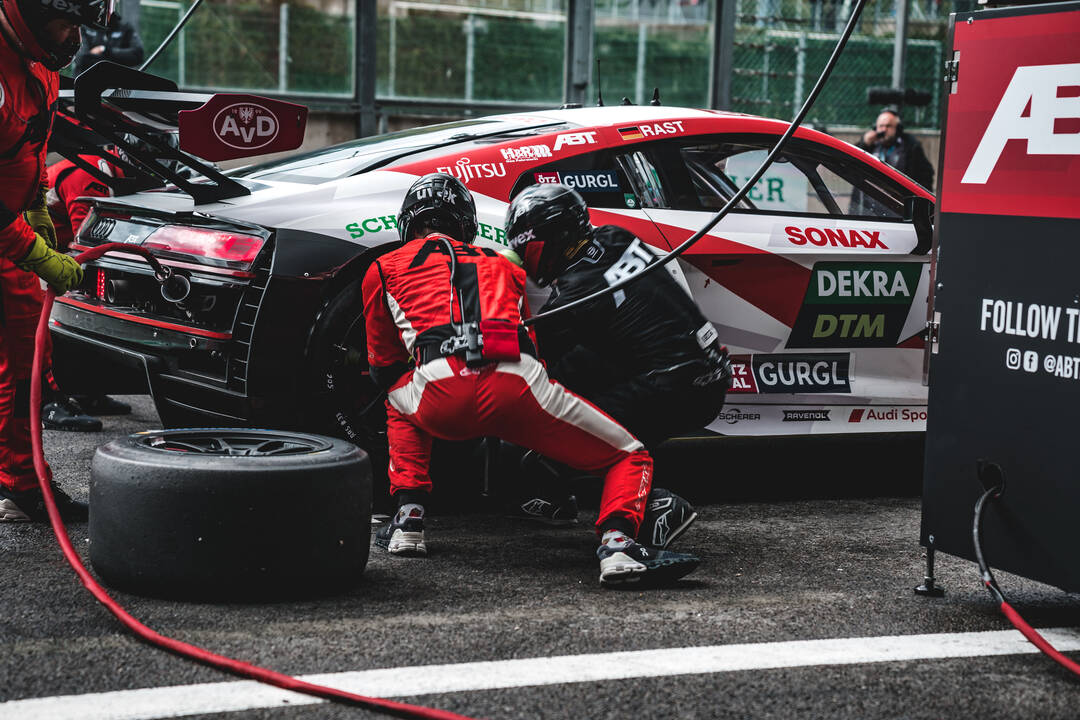 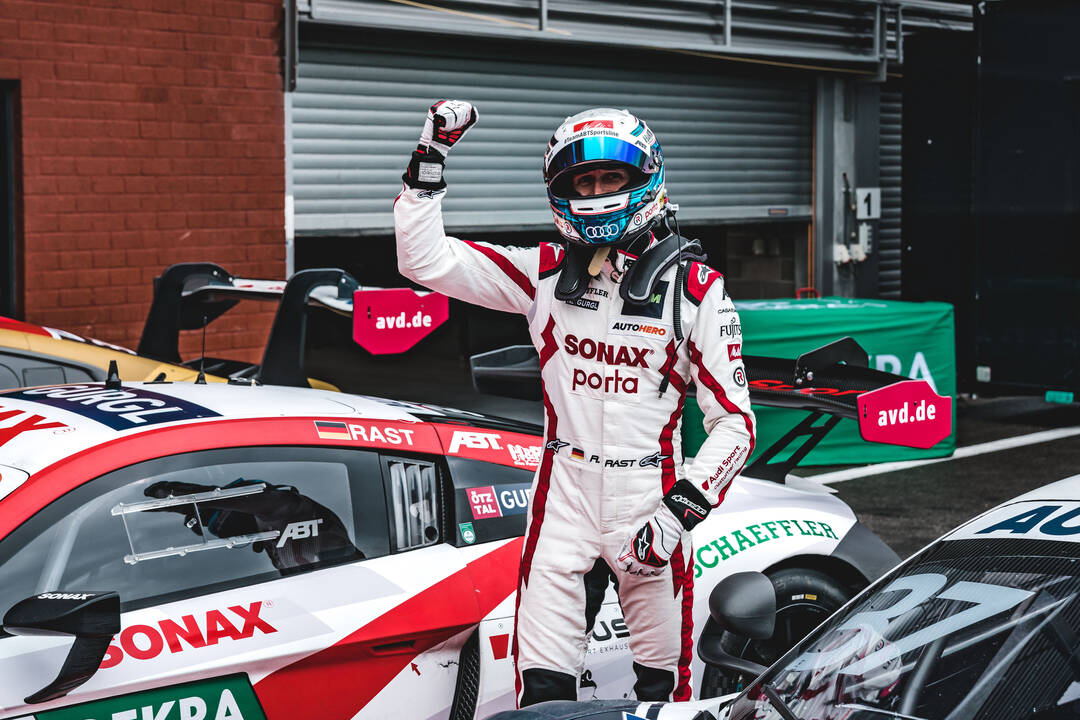 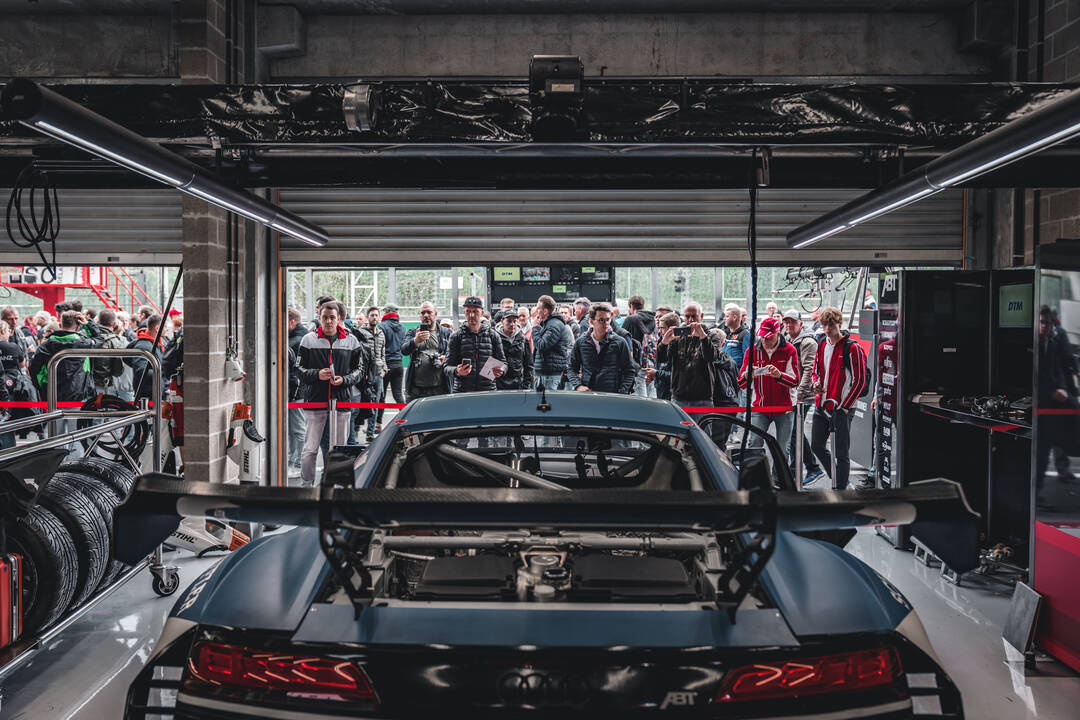 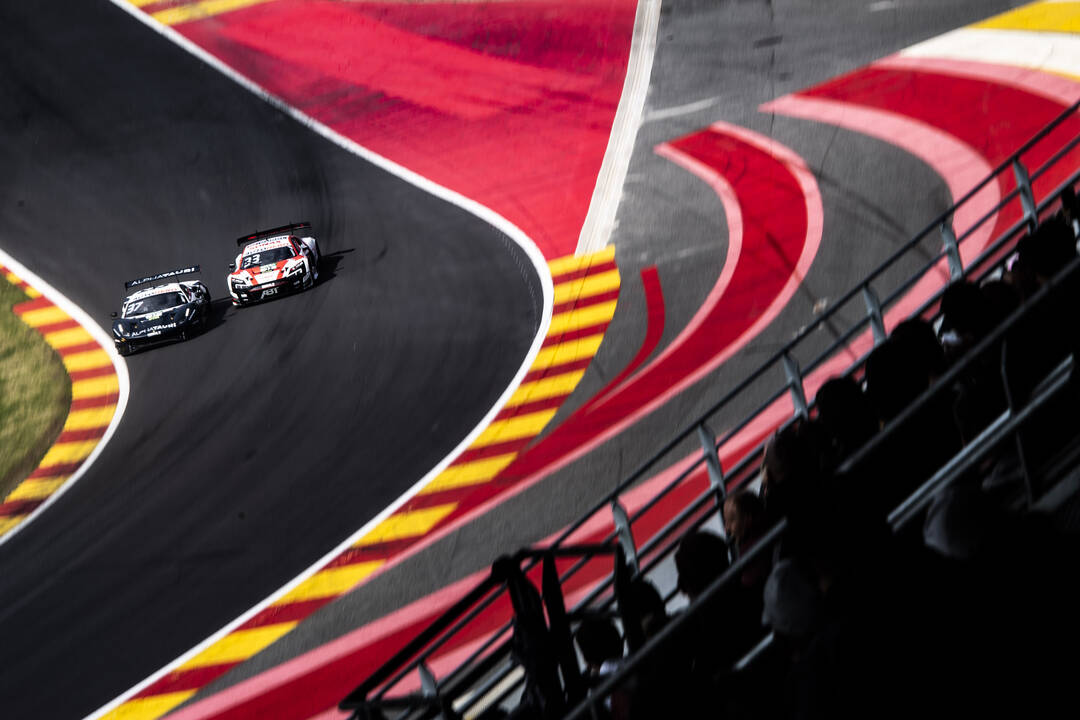 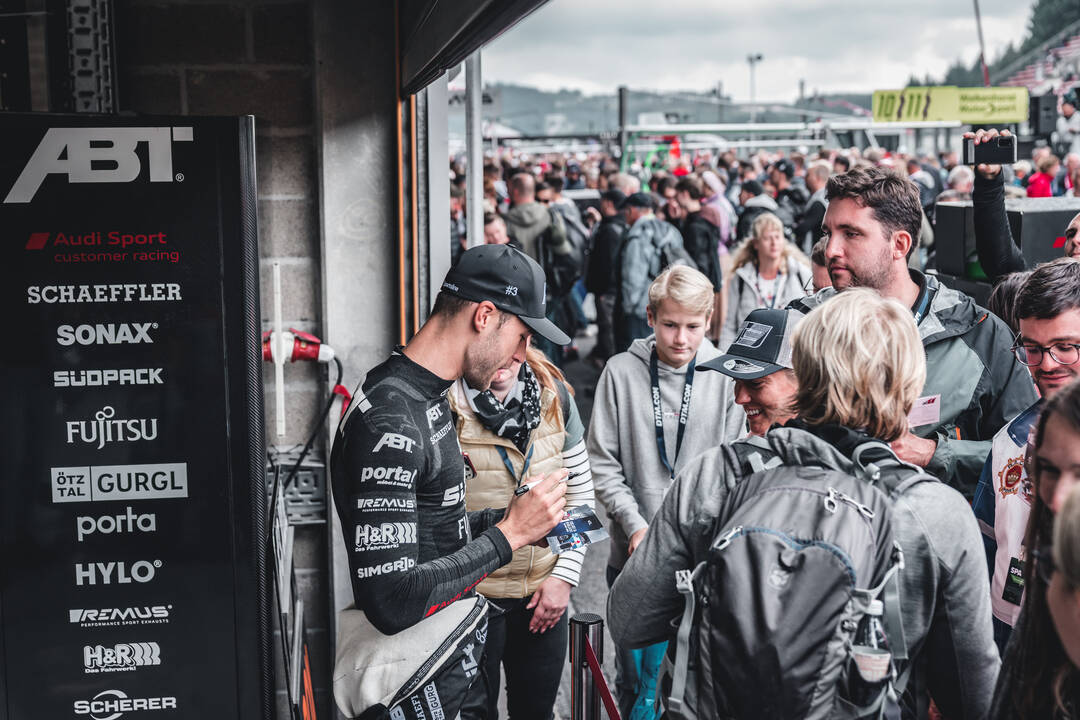 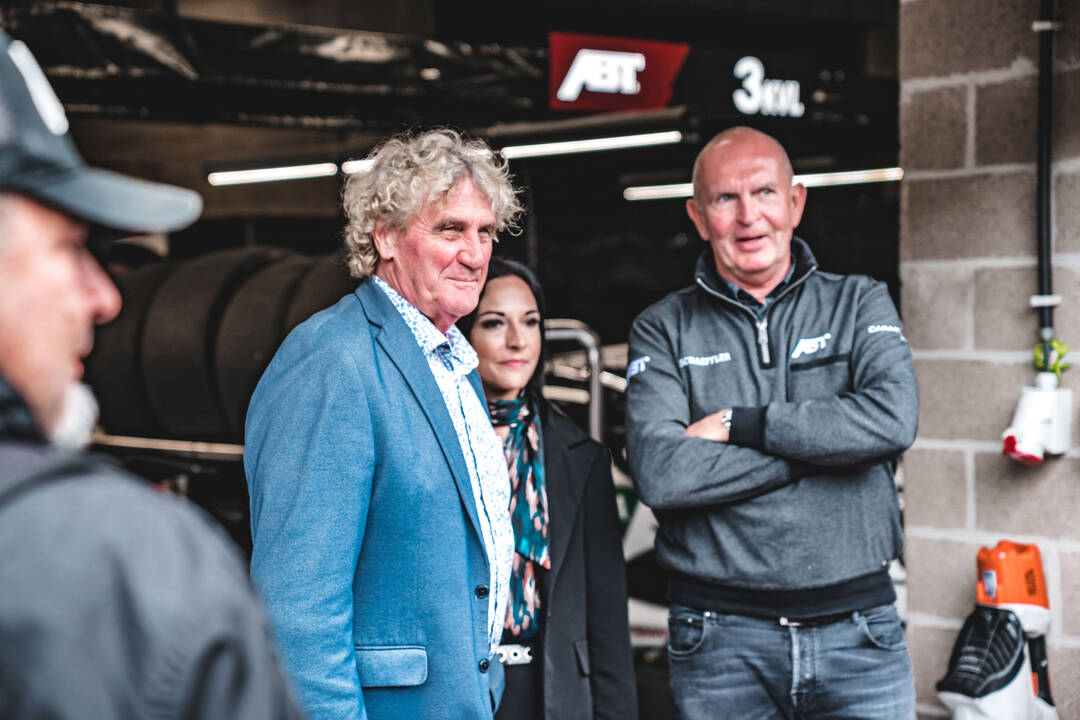 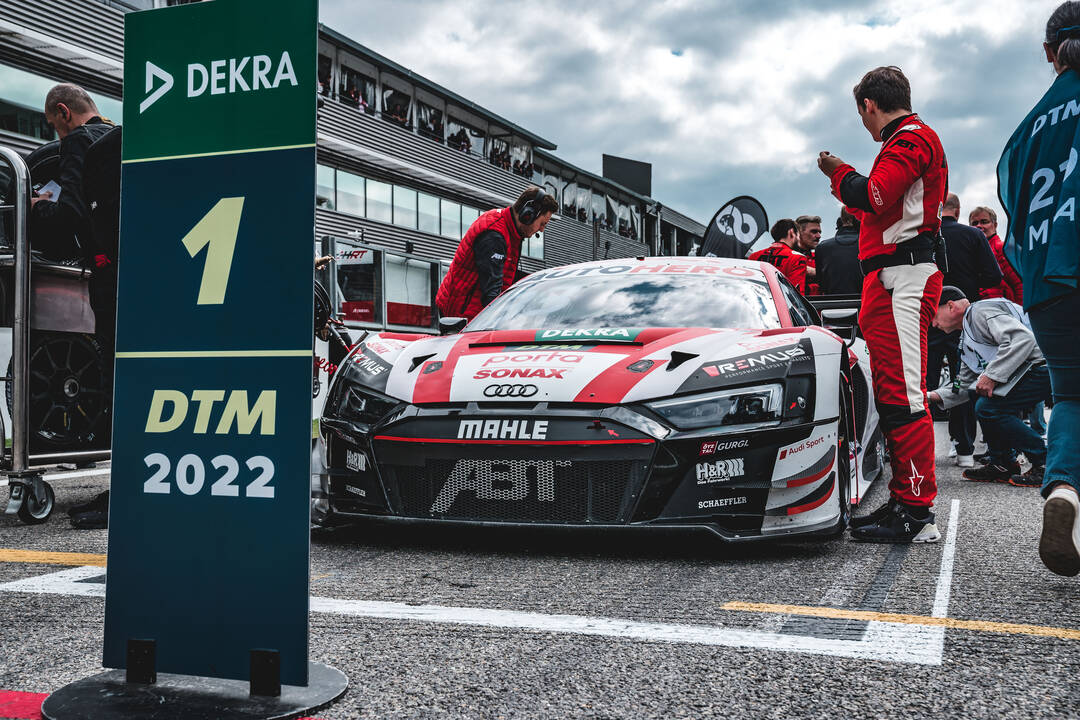 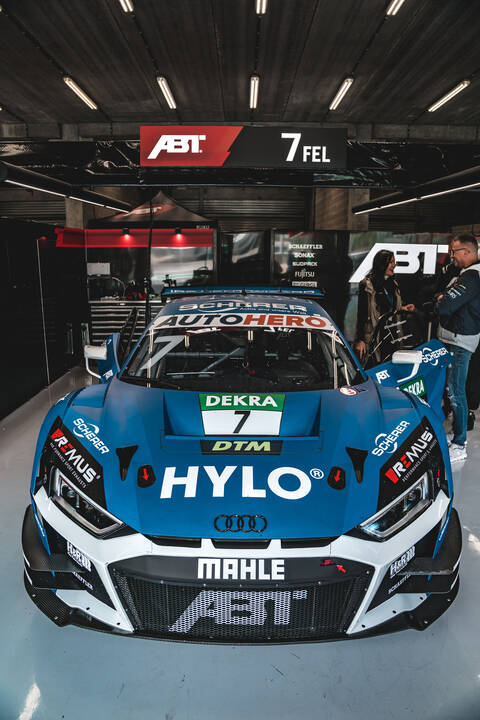 The three-time DTM champion had clinched fourth place in the first race on Saturday from ninth on the grid, improved to second place in the standings and reduced the gap to leader Sheldon van der Linde (BMW) to 17 points.

With a perfectly timed lap on a drying track, Rast clinched pole position in Sunday’s second qualifying session and thus another three points. Although he had to defend against faster cars from the start in the race, Rast was in third place shortly before the end of the race before the left rear tyre suddenly lost air – for no apparent reason.

Contact with the Ferrari of eventual winner Nick Cassidy in the early stages of the race had nothing to do with the puncture: firstly, Rast touched the Ferrari with his left front wheel. Secondly, Rast changed tyres between the contact and the retirement. The fact that a 5-second time penalty was imposed on Rast for the collision with Cassidy was no longer relevant after the retirement.

Kelvin van der Linde finished a strong fifth on Saturday but had no chance on Sunday. Ricardo Feller had a disappointing weekend on his favourite track, finishing 18th and 13th. His personal highlight was the seventh-best time in the second qualifying session in difficult conditions on a track that was still wet in parts. On Sunday, he was the best-placed Audi driver – but outside the points.

In the drivers’ standings René Rast dropped back to third place due to his retirement. The gap to Sheldon van der Linde grew to 34 points. Lucas Auer (Mercedes) is two points ahead of him. A total of 116 points are still up for grabs in the remaining four races at the Red Bull Ring (September 24/25) and Hockenheim (October 8/9).

In the team standings, Team ABT Sportsline remains in second place behind Schubert Motorsport after six of eight events.

Quotes after the DTM races at Spa-Francorchamps

Thomas Biermaier (Team Principal): “It’s always the last impression that sticks. And that’s a big disappointment: zero points on Sunday, no performance. You could already see on Saturday that we had no chance here. If there hadn’t been so much happening in front of us, the best Audi on Saturday would have been eighth at best. Then on Sunday not a single Audi scored points. That says it all. Those who know us know that we won’t give up and will keep fighting. But it’s also clear that the Audi R8 LMS need a fairer BoP because this way we simply don’t have a chance to fight on a par with the others in the races.”

Kelvin van der Linde (ABT Audi R8 LMS GT3 evo II #3): “I was actually quite happy with my top-five result on Saturday. It was great for the team to get two cars in the top five. Sunday was unfortunately a sad day for the whole team, especially René’s retirement. With the first set of tyres, I was actually doing quite well, but with the second set nothing worked after the pit stop. That was disappointing. But there are still two race weekends and we’re focusing on them.”

Ricardo Feller (ABT Audi R8 LMS GT3 evo II #7): “Unfortunately, it was a bad weekend for me. The problems already started in the first free practice when we saw that we were simply missing too much. In the second race we found some pace, but still it wasn’t enough for points. The second race was very bad for us as a team overall, especially René’s puncture at this stage of the championship is extremely annoying. But we won’t give up and will come back stronger.”

René Rast (ABT Audi R8 LMS GT3 evo II #33): “Without the puncture, my Spa balance would obviously have been more positive. Fourth place on Saturday and pole position on Sunday were two highlights. Unfortunately, the race on Sunday didn’t go according to our expectations. We had hoped to finish on the podium or at least in the top four or five again. But then we retired at the end with a puncture.”