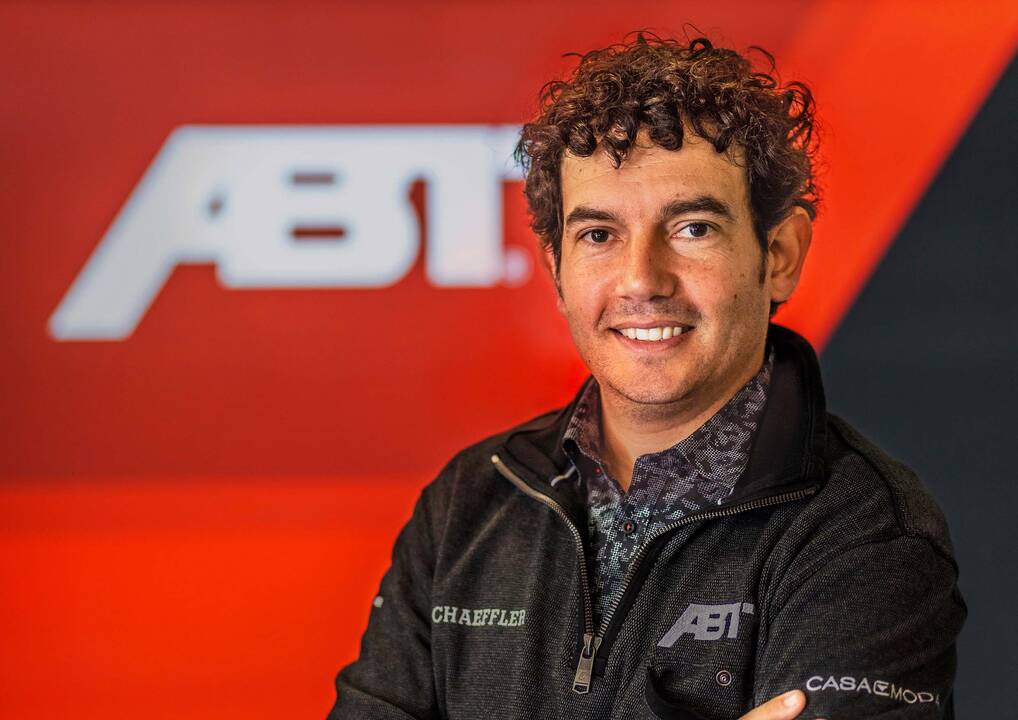 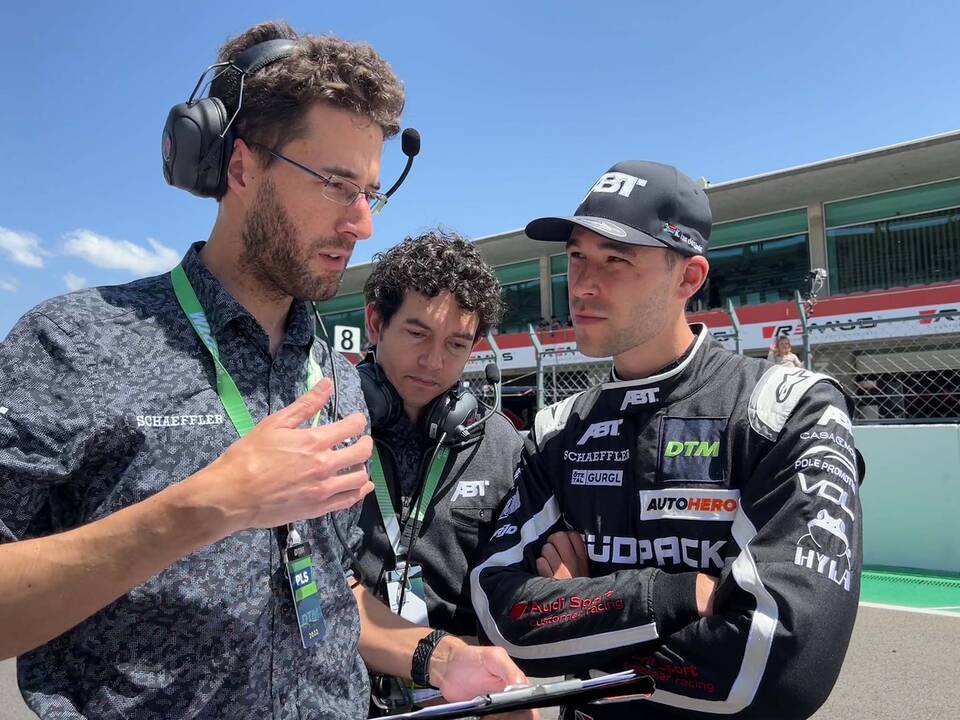 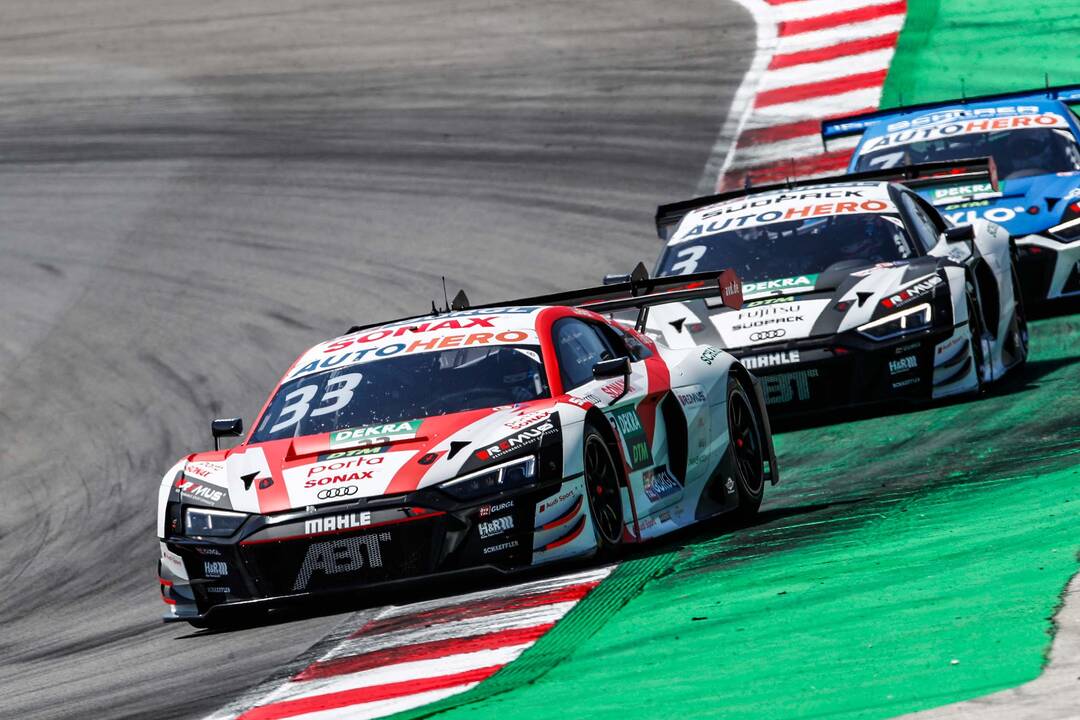 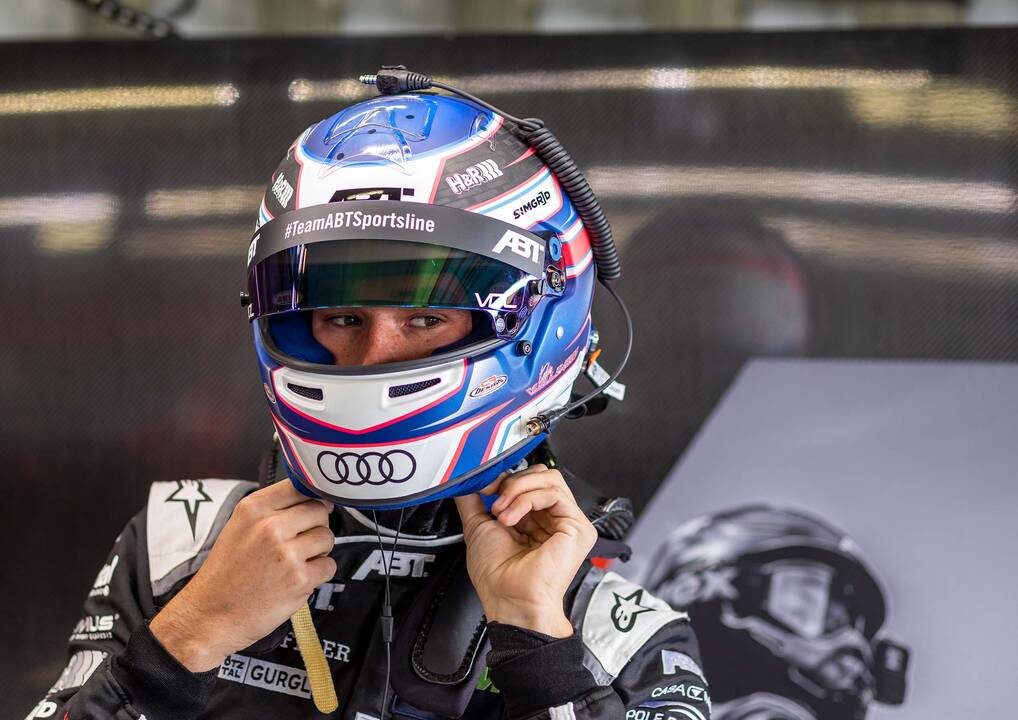 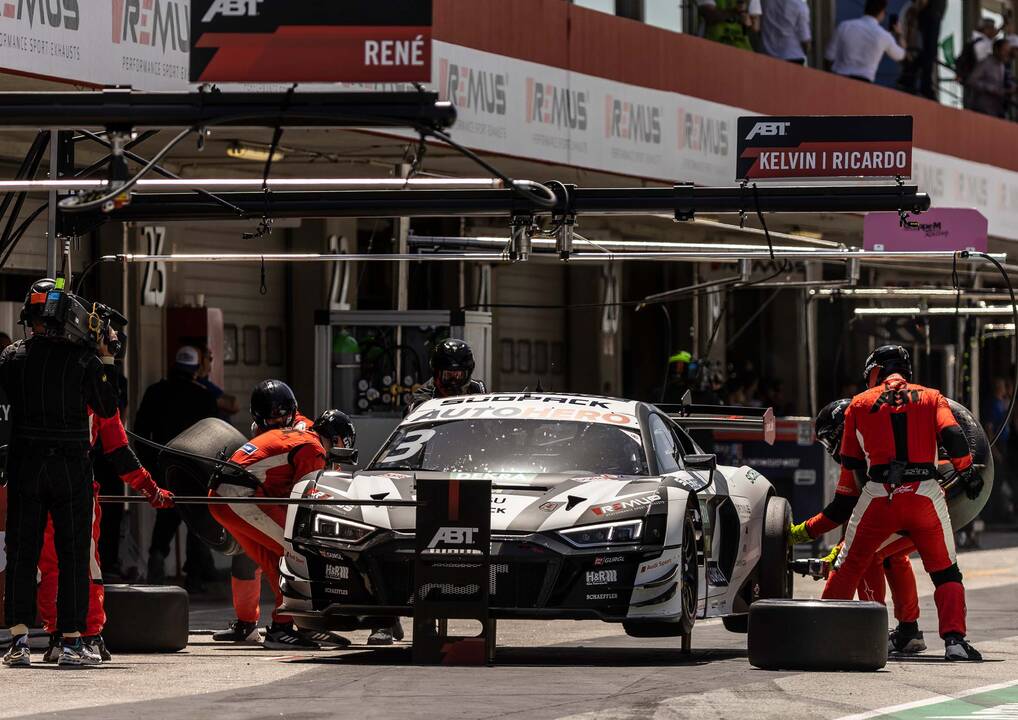 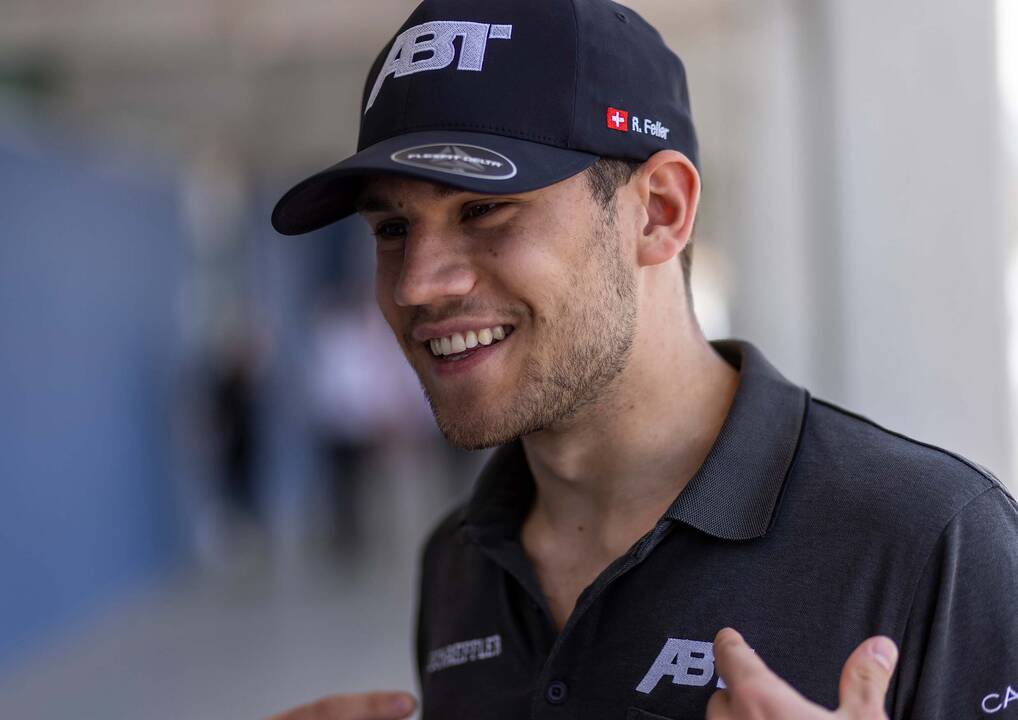 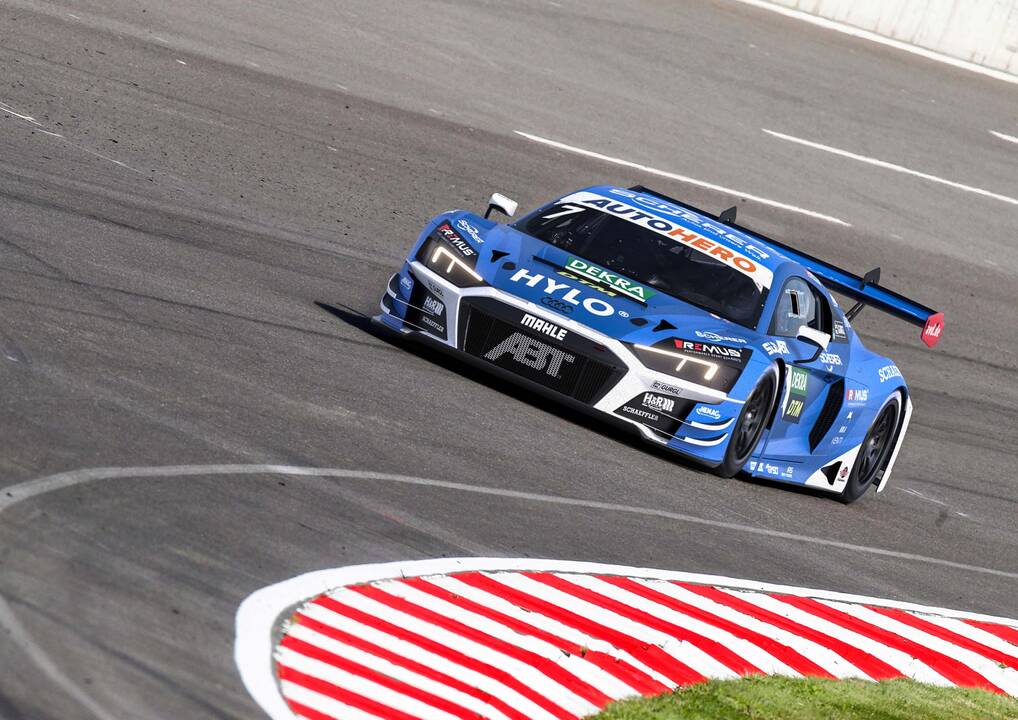 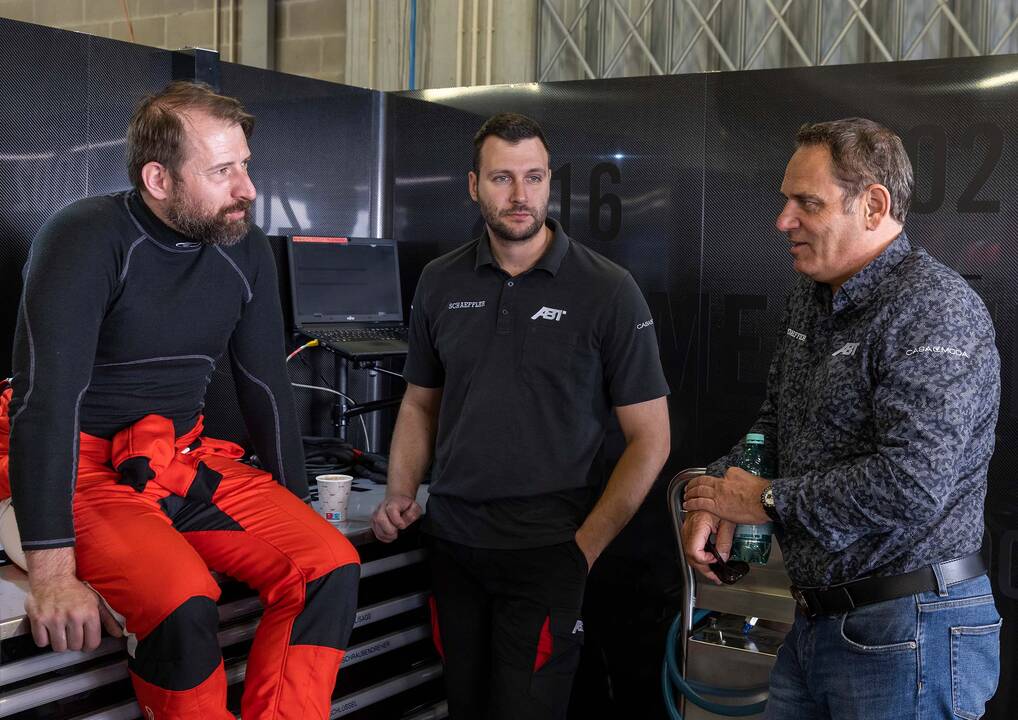 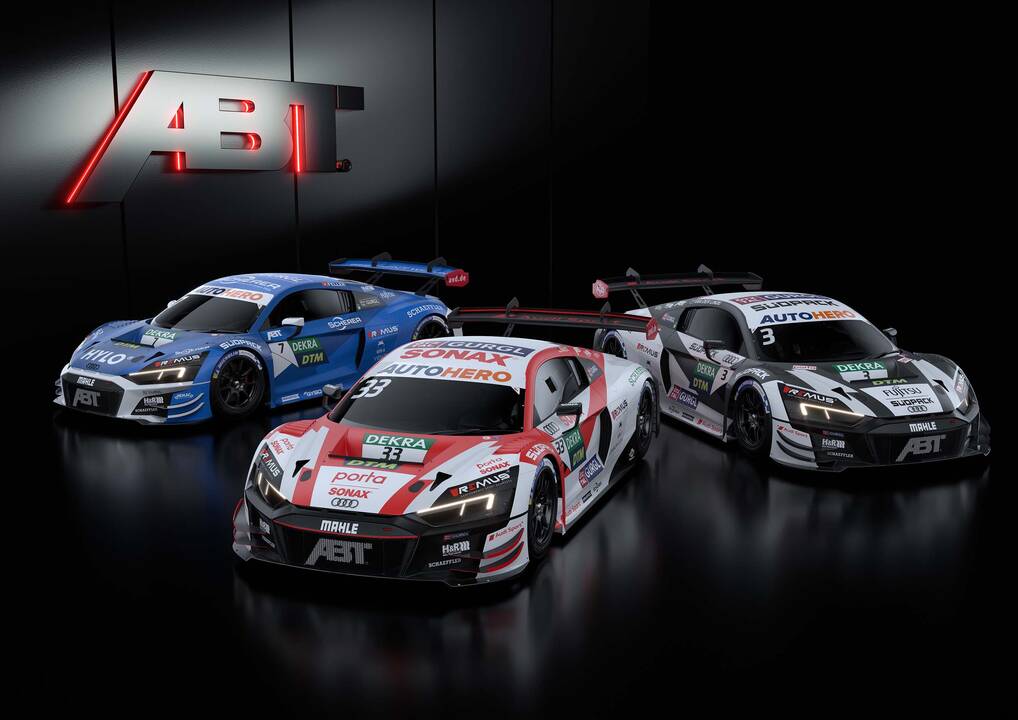 ABT DTM engineer Marc Roca: “‘From the racetrack to the road’ is more than a slogan”

Marc Roca (38) is the DTM project manager at ABT Sportsline and the race engineer of Kelvin van der Linde’s ABT Audi R8 LMS GT3 evo II. Ahead of the first DTM race weekend of the year in Germany, at the Lausitzring (both races from 1 PM CEST live on ProSieben on Saturday and Sunday), the Catalan reveals how he ended up in the Allgäu region, his driver’s strengths and weaknesses and the close connection between racing and vehicle refinement at ABT Sportsline.

The DTM has a record grid this season. How impressive was it to see 29 cars going into the first corner at Portimão?
It was very impressive, especially with the sound of all these cars! You just hope your car is in one piece after the first corner ...

How does a race engineer see the start of a DTM race? Do you have only eyes for your driver?
Exactly. We have around five screens in the corner of the pits where we are working. Your eyes are crossing all the time between different images. Where is your car? What are the gaps? Are we gaining some positions? This is very important on the first lap.

What is your primary job during the race?
We try to help the driver who is alone in the car. Is he trying to gain a position or just trying to maintain his gap? How is the pace of our driver compared to others. What can we achieve in terms of strategy? And we are informing him about things like track limits, if somebody has had a penalty or has already pitted. All of this knowledge is providing the driver with confidence and this is very important.

The DTM rules have changed a little bit from last season. How do you rate the changes after the first race weekend?
I think the rules are clearer, so there is less room for interpretation. This is helping both sides, the organization and also the teams. They did a good job, you can see that they want fair races. The fastest car should win.

You just said the fastest car should win. ABT Sportsline has three very competitive drivers. How do you work together with the other engineers and the other two drivers? In the end each of them wants to win …
It may sound as a cliché, but all three of them are really professional. We are sharing all of our ideas to extract the maximum performance. When the driver has competition within his own team, he can see the potential of the car and can improve and develop himself. At the moment, it is going really well. And you can see that we have people that are really committed and not there to play around.

You’ve been working with Kelvin van der Linde since last season. How would you describe him. What are his biggest strengths?
He is really fast and has the skill to get the maximum out of his car. He has a good feeling and gives good feedback. And you can see he is really a specialist with the Audi R8 LMS, which he has been driving for many years.

Are there any weak points?
Kelvin is really emotional, but I wouldn’t say this is a week point. I’m from Barcelona and exactly the same. We try to take advantage of this and extract the extra bit of performance with this commitment. But obviously, it’s making things a little bit more difficult when there is a defeat.

You’ve been promoted from a data engineer to a race engineer at ABT Sportsline last year. How big was the step? What’s different in your new role?
It was a big step and even two steps at once. In Class 1, I was taking care of the performance of one car. Since the DTM has changed to GT3, we have less support from Audi. We can develop more ourselves, but obviously we also have more tasks and things to cover. It’s not only about the car, but also the electronics and the tools to prepare for the races in the best possible way. It has been a big challenge, but I have also been doing it with other teams in the past. This helped me to work in the new role and I enjoy it a lot.

You mentioned the switch from Class 1 to GT cars. What can you do to make these GT3 cars go faster?
It’s a good question. If you have the clear answer, you can work for us and be the chief engineer ... It’s all about details. You have to try to perform in every single era, make the driver comfortable and extract the maximum, make the tires work best and understand how to set the car up for the specific track. You really have to maximize everything.

Kelvin was surprised about the many meetings in DTM last year. What’s happening in these meetings? How important are they?
As I said: you want to bring everything to the maximum level of performance. We don’t want to miss any comment, any bit of feedback. Each session is like a test session for us. We ask them everything regarding pure performance, but even things like ergonomics. Are they comfortable in the car? Can they see everything? Is there something that can distract them? You need to put all of the parts together in order to be fast. That’s the reason why we are analysing and meeting so much.

You are a Catalan. How did you end up with a Bavarian team in DTM?
Motorsport has no frontiers. I started with teams in Barcelona. When we were using a Ferrari, I met a lot of people from Italy. At that stage, I was young and saw a lot of options in Italy. I worked for Maserati and Ferrari. When I saw the job offer from ABT for DTM, I did not lose any time to take the opportunity and work in Class 1 with such a great team.

ABT Sportsline is based in one of the nicest regions of Germany. What are you doing during your leisure time, if you have any?
Yes, I have. Motorsport works in cycles. During the race weeks, you are fully focused. But when there is free time, the Allgäu is a really nice region to enjoy life. We are close to lakes and mountains. I have a mountain bike. And my wife and I also go hiking together. Kempten is a small city, but has nice restaurants and places to walk around. When we want a little bit more, we go to Munich, which is also a really nice city.

The DTM team is just one part of ABT Sportsline. How to you rate the company in general?
You can see the heritage. It’s a big company with tuning and motorsport working really well together. Even though we are in two separate buildings, they are close together. We are going to the people from the tuning side and they are coming to us to develop technology, or even test their cars in our workshop. ‘From the racetrack to the road’ is not only a slogan. ABT Sportsline is a complete automotive company.

The DTM is racing at the Lausitzring next weekend, a race that Kelvin almost won last year. What’s the key to be successful at Lausitz?
It’s a quite complicated track, because the level of the bumpiness is higher than on other tracks. Sector 1 is all about high speeds and pure aero. In the second and third sector, you have medium and low speed corners. It’s a challenge to find a good compromise, but ABT has a lot of experience at the Lausitzring and won many races there.

Thomas Biermaier (Team Principal): “After a mixed start at Portimão, we are going to the Lausitzring with confidence. We were very fast there last year. We worked hard after the start of the season to understand why we weren’t at the front at Portimão. We think we know the reason and we want to fight for wins in Lausitz – and score good points for the championship again. As it is the first race in Germany, it’s like a second start of the season in front of what we hope will be a great crowd. Already last year, the first corner on the oval was a spectacle worth seeing.”

Kelvin van der Linde (ABT Audi R8 LMS GT3 evo II #3): “I’m looking forward to the Lausitzring, even though it’s not my favorite track. But I’ve always had good races there in the past. Last year, I only just missed out on victory when the engine cut off briefly while I was in the lead. That’s why we still have a score to settle and would like to make up for it with victory. After Portimão, we did our homework and will do everything we can to be the best Audi.”

Ricardo Feller (ABT Audi R8 LMS GT3 evo II #7): “After my positive debut in the DTM, I’m looking forward even more to the next DTM weekend. We laid a good foundation at Portimão, which we can build on and continue to fight our way forward race weekend after race weekend. I have good memories of the Lausitzring in the GT Masters from last year. The track variation with the steep first corner is new to me, but I find high-speed corners mega. So, I can’t wait to get out of the pits for the first time on Friday.”

René Rast (ABT Audi R8 LMS GT3 evo II #33): “I’ve already won races at the Lausitzring in the DTM, but it’s the first time for me to drive the fast version of the first corner. Of course, I’ve already had a look at it and I’ve also heard about it from the other drivers. But I’m really curious now as to what it feels like in the car to drive through there almost at full throttle. I hope that we can at least score our first points at the Lausitzring. It would be important for me not to go home without points again.”

... ABT team manager Roger Köhler was at the Formula E event in Berlin last weekend to make logistical preparations for ABT Sportsline’s comeback in the electric racing series, and drove straight from there to the Lausitzring?

... ABT partner SÜDPACK, with owner Johannes Remmele and managing director Erik Bouts, were guests of ABT Sportsline at the DTM season opener at Portimão, while Schaeffler board member Matthias Zink is expected to be at the Lausitzring?

... Kelvin van der Linde and Ricardo Feller only returned from the 12-hour race at Bathurst, Australia, on Tuesday and had to cope with a time difference of eight hours?

... all three ABT drivers will more or less travel directly from the Lausitzring to the 24-hour race at the Nürburgring, where they are competing for Audi Sport customer racing and Scherer Sport?

... René Rast won the LMP2 class in the World Endurance Championship (WEC) at Spa during the weekend after Portimão?

... one of his teammates there was former ABT DTM driver Robin Frijns?

... Robin Frijns, with his company Frijns Unlimited, is now also a valuable business partner of ABT Sportsline?

... Ricardo Feller drove an Audi RS e-tron GT for ABT partner Scherer at the premiere of the first e-racing taxi on the Nürburgring-Nordschleife?

... Jürgen Tap became the first winner of the ABT DTM Photo Challenge in Portimão and won a wheel care set from ABT partner SONAX?

... for the first time, not a single point was awarded in the popular ABT DTM predictor game for media representatives at the season opener at Portimão, because not a single prediction was correct?