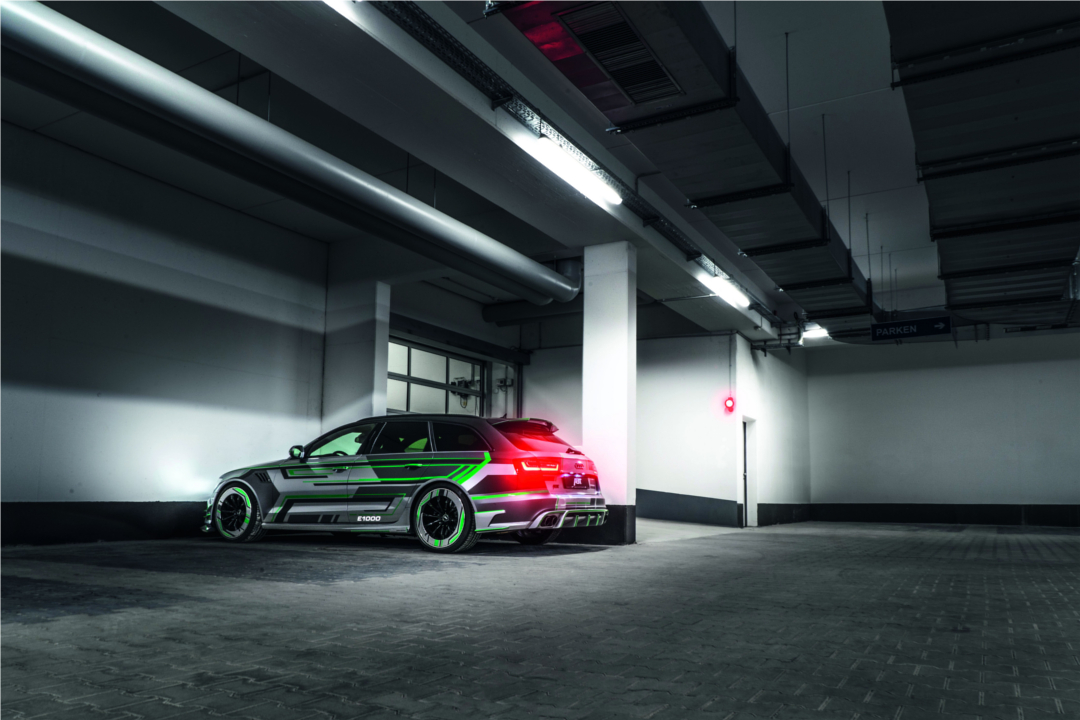 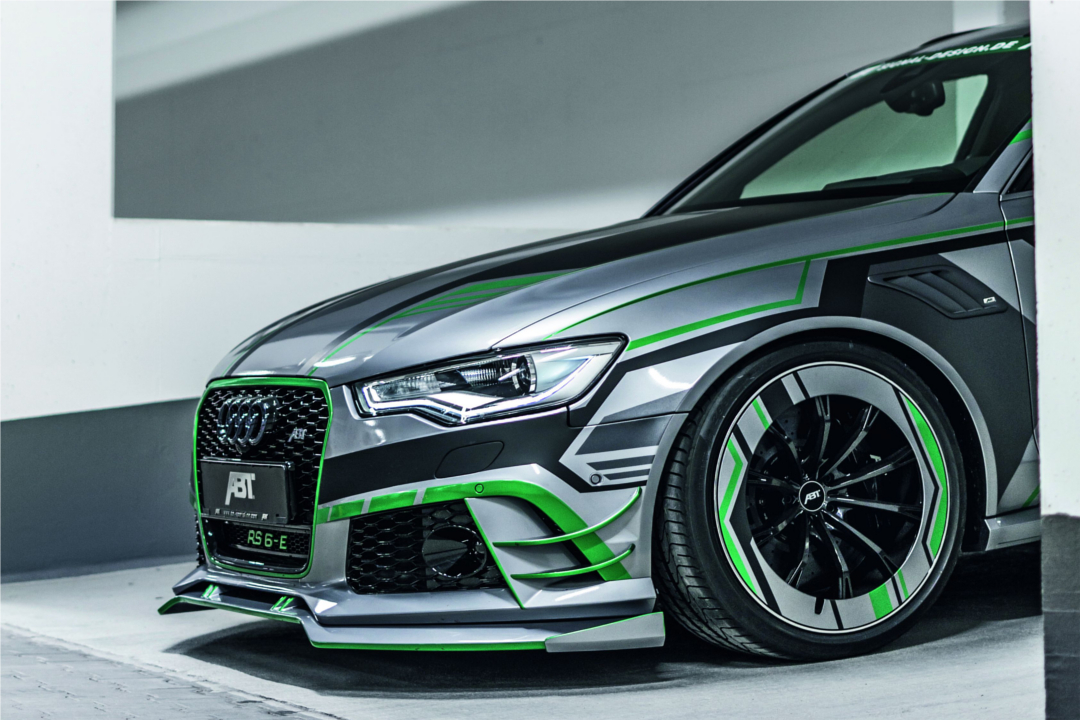 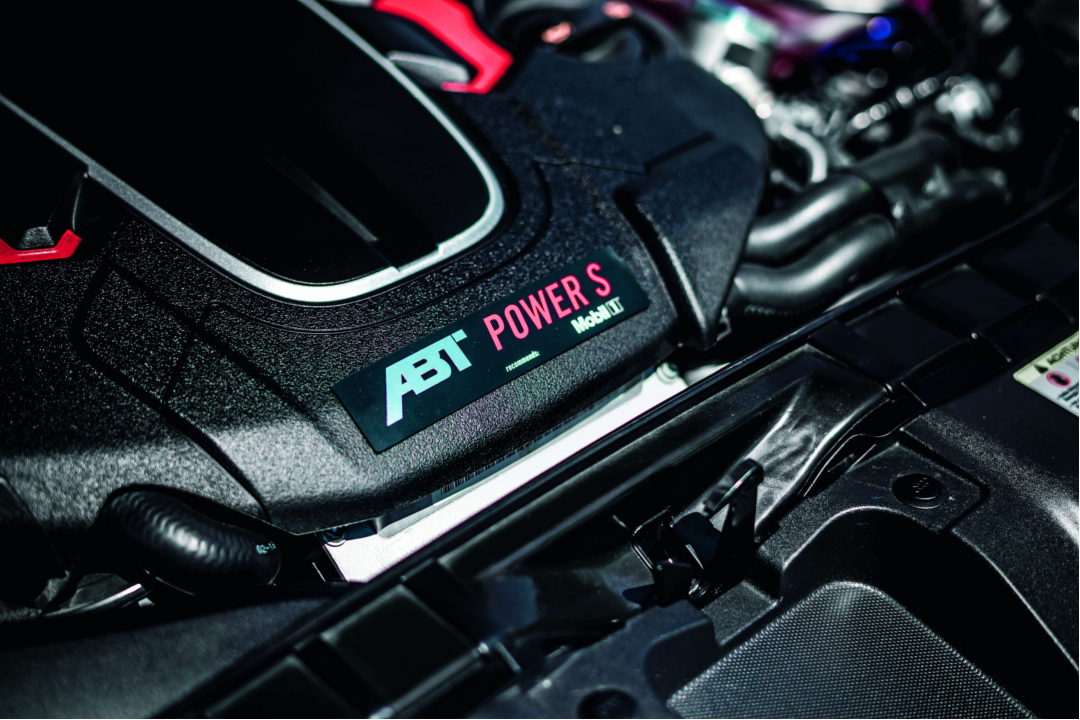 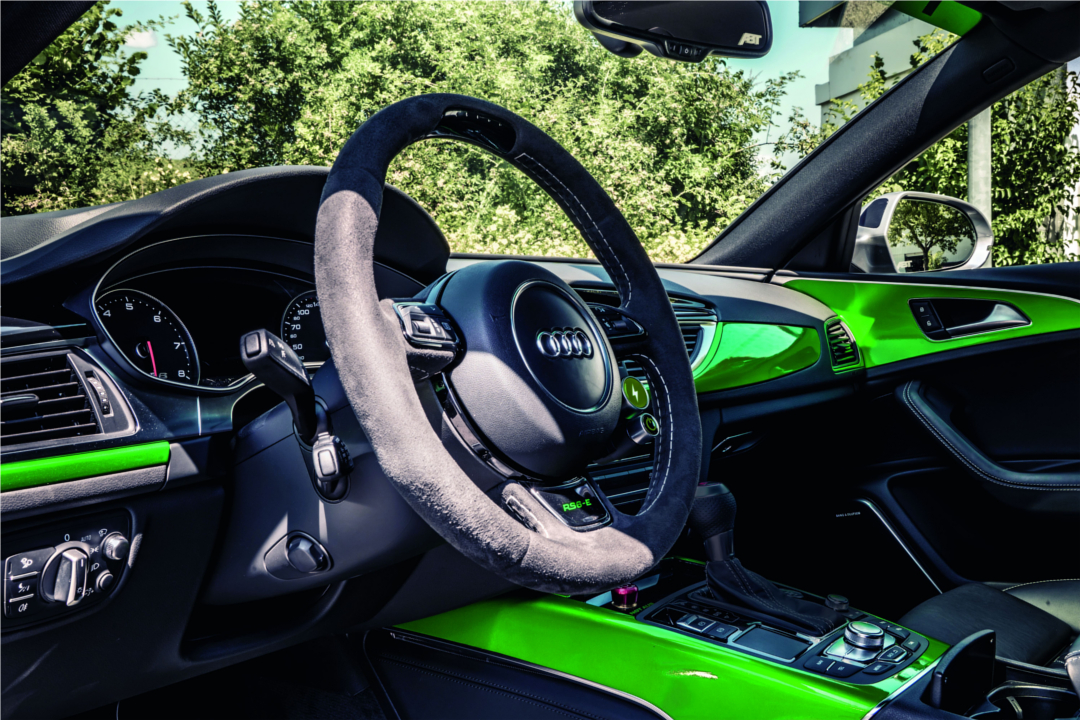 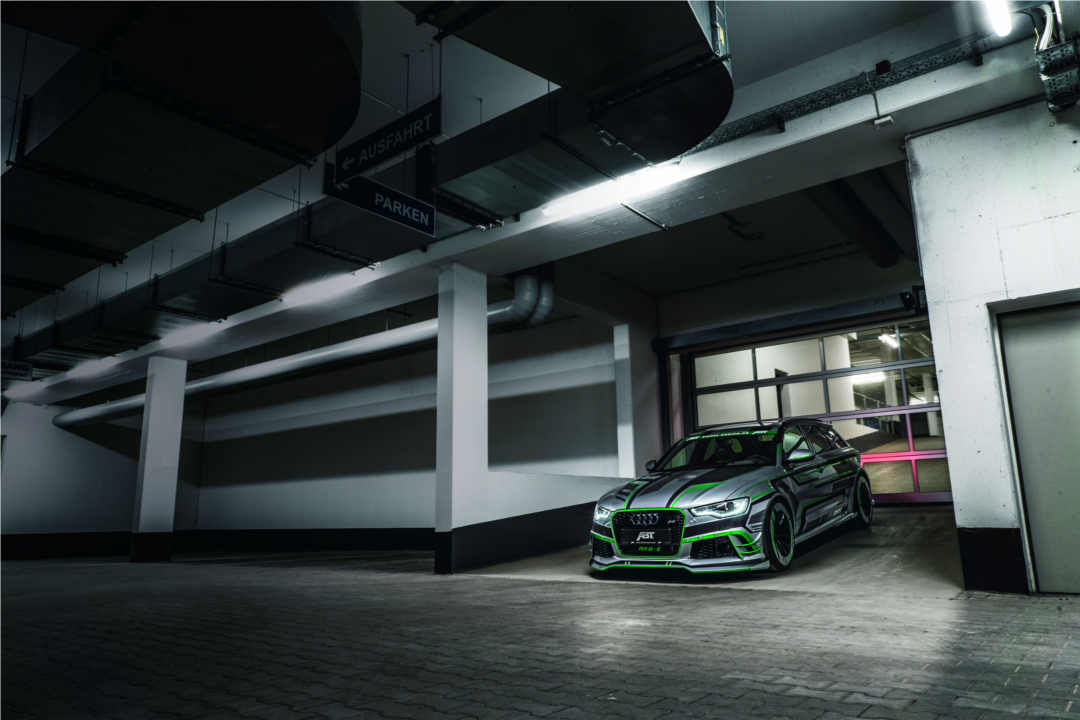 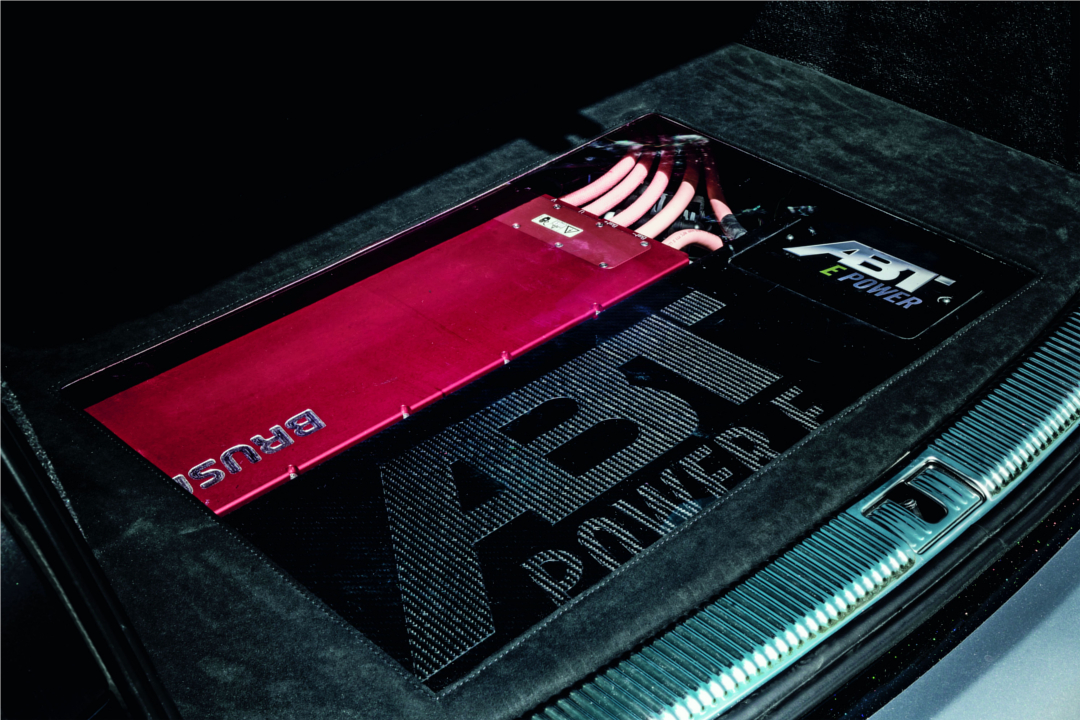 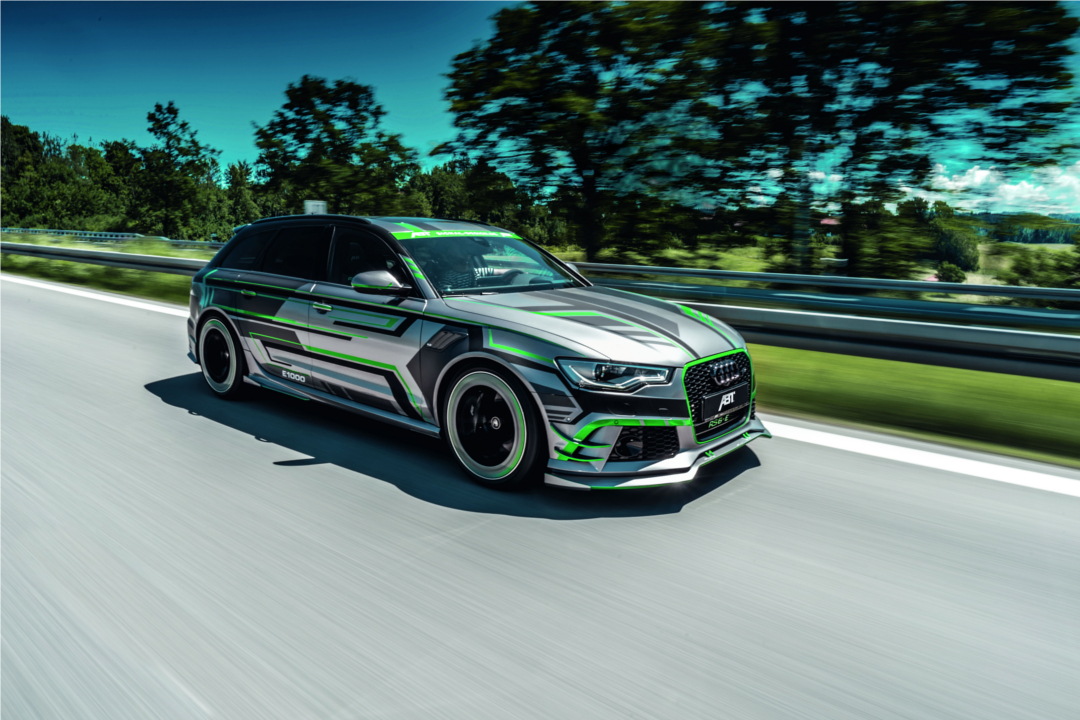 A combination the world has never seen before gets on stage: inside the ABT RS6-E a V8-biturbo and an e-machine unite to a fortissimo furioso with 1018 PS.

James Bond has warned us to never say never. And indeed, the ones who thought that the more than 700 HP given to the Audi RS6 by ABT can’t be topped are being taught much better. Welcome on board of the RS6-E. A car 007 would surely like a lot. Because at the push of the green, with a power lightning marked button on the steering wheel, you don’t just activate a single ejection seat but five of them at the same time. The 288 HP strong boost that has just been activated can appropriately be described as “rocket-like”.

The fast mental calculators among you have already added the performance numbers of the RS6-E: 730 V8-HP plus 288 electric HP equal 1.018 HP in total. The torque even tops that: 1.291 Newton meters. This frightening number is the reason why the electric power can only be used from 100 km/h and the third gear on. If that “torque-tsunami” would flood the powertrain of the standing or slower driving RS6-E, his intestines would be torn apart because of the ungovernable forces.

In order to make this raw power work, you need to have a lot of know-how – that’s a job for ABT’s “special force E” (official name: ABT e-Line). These experts busy themselves with the topic of electric mobility since 2009. At first they converted VW-vans into electric vehicles for the Deutsche Post and other companies. The next step was the pioneer work at the newly founded Formula E. Following the company’s slogan “from the racetrack to the road” they were able to use many of the competences needed in the first global racing series for the development of components for normal road vehicles.

That fact that the topic of e-mobility can have a high action- and fun-factor was shown at the beginning of 2018 with another project made by ABT thanks to the Schaeffler 4e Performance built on behalf of their Formula E partner Schaeffler. The “Äbte” put four Formula E engines developed by the Schaeffler Company Compact Dynamics inside a gutted Audi RS3 LMS. The system’s performance also equals more than 1000 HP.

Typically ABT: Quality and practicality

Inside the RS6-E the electric specialists at ABT combined a performance increased V8-biturbo with an e-machine for the first time. The RS6-E project has been a secret operation for a long time. One reason was to not let the concurrence know about the project. Another reason was to be able to build up the vehicle in peace and with great care which equals the high standards of ABT in terms of quality and practicality. To electrify the vehicle, ABT exchanges the original cardan shaft with two shorter shafts and an electric engine. The power comes from the 13.6 kWh battery hidden in the spare wheel recess in the trunk. An additional cooler takes care of appropriate temperatures for the electric components. The complete e-package weighs 255 kilos which results in a total performance weight of 1.12 HP for each kilogram.

The driving impression is incredible

Racing professional Daniel Abt has tried out what happens when you push the “magic button” at the steering wheel and release the electric boost. One boosting period can last up to ten seconds. Depending on the degree of recuperation, one battery offers 15 to 20 boosts. The boosted RS6-E just needs 9.3 seconds for the sprint up to 200 km/h. That’s two seconds less than the 730 HP strong RS6. After that, it’s a quick way to the top speed that equals 320 km/h. “Whaaat is that”, an incredulous Daniel Abt asks during his first ride with the unique specimen that plays in the same league as other hybrid-super-sports-cars like the Porsche 918, Ferrari LaFerrari or the McLaren P1. “That thing keeps on pushing and pushing. Incredible.” Welcome to electric crazyland.