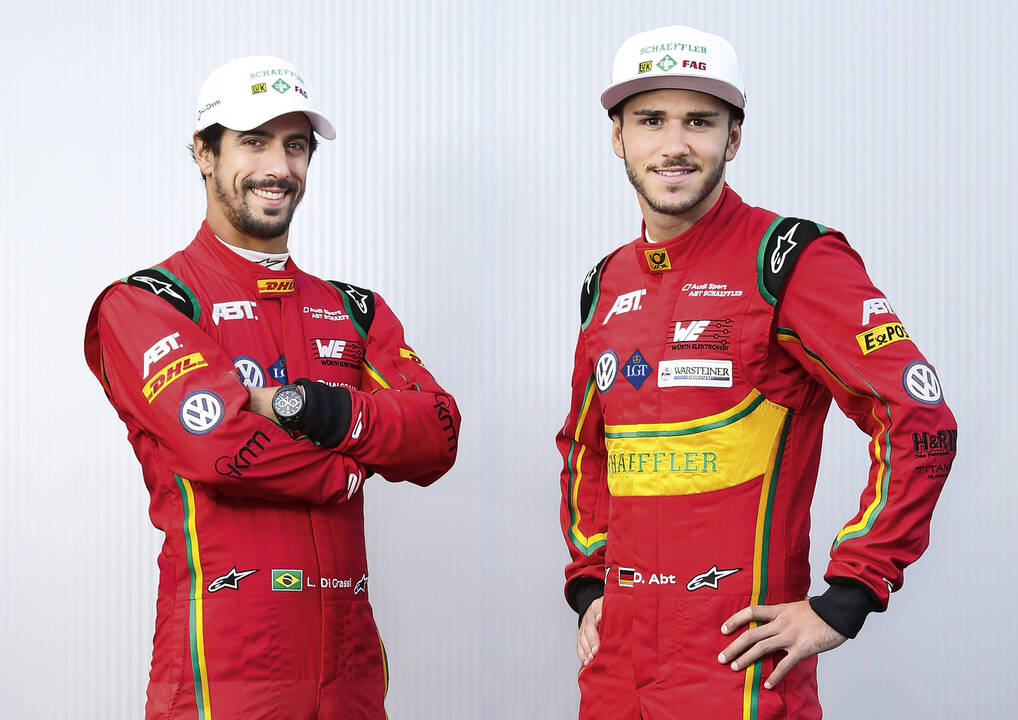 ABT starts to second Formula E season in China

On Saturday the second season of Formula E, the first international racing series for fully electric single-seater racing cars will start. The German Team ABT Schaeffler Audi Sport is going to embark on the world tour that begins in the Chinese capital with drivers Daniel Abt and Lucas di Grassi. In Germany, Eurosport will be airing live coverage of the race

10 international teams, 20 top drivers, 10 fascinating metropolises around the globe: the Formula E electric racing series caused a major stir in its inaugural season far beyond the motorsport scene. Now the summer break is over. Next Saturday at 16.00 (local time) Daniel Abt, Lucas di Grassi and the German team are going to start chasing the title.

“We’re happy that we’re finally going to race again”, says Team Director Hans-Jürgen Abt. “The preparations were strenuous, intensive, but successful. We’re well set for the first race.” For the second season the team, together with technology partner Schaeffler, has developed its own powertrain for the single-seater racing car. An electric motor (named ‘ABT Schaeffler MGU 01’) and a 3-speed gearbox, plus an optimised suspension and the corresponding software, have been created. This is the package the only German outfit in the field will be competing with against its rivals.

New technology, proven drivers: Daniel Abt (22) and Lucas di Grassi (31) will again be sitting in the cockpit of the ABT Schaeffler FE01, as the car is called this season. The Brazilian, who the year before was only defeated in the title race at the last event, looks forward to the season opener: “I’m just as excited as I was before the inaugural season. We’ve got a brand-new technology package with our electric motor, the gearbox and the other developments made in recent months. The impressions during the pre-season tests were absolutely positive – both in terms of reliability and our speed.”

The expectations of his teammate Daniel Abt are high as well: “The opener this year will be completely different than in 2014. All the teams have been gathering experience for a whole year, analysed everything after the season, and are now travelling to China with much better preparation,” says the youngster. New for all the drivers will be the qualifying format: “Qualifying will be a huge challenge. We’ve only got a single lap now in 200-kilowatt mode – if you’ve got traffic or make a mistake that may well ruin your chance of clinching a good grid position. The Super Pole is truly a shootout of the best five drivers for pole position and the three points awarded for the top spot on the grid. That’s going to be a real thriller for the fans.”

The 3.439-kilometre circuit in Beijing that is routed around the Olympic stadium has been slightly modified compared to last year. “The organisers have removed a very slow chicane from the track configuration. Now the circuit is much faster, more fluid, nicer to drive on, and offers a lot more overtaking opportunities. The race will be a lot more exciting than last year”, says Lucas di Grassi. “My memories of Beijing couldn’t be any better. A little more than a year ago we won the first-ever Formula E race there. Beijing and the track are unique.”

Two free practice sessions, qualifying and the race are held on a single day in Formula E – plenty of action for fans and drivers. In the near-one-hour race in the afternoon the drivers make one pit stop to change cars. The winner, like in Formula One, receives 25 points (25-18-15-12-10-8-6-4-2-1) and additional points are awarded for pole position (3), plus the fastest race lap (2).

The season opener will start on Saturday at 16.00, local time (10.00 CEST). Eurosport is the new television partner this season. The channel will be airing live coverage of the race on Free TV. All practice and qualifying sessions can be watched live as well on the fee-based Eurosport Player.

All partners of Team ABT Schaeffler Audi Sport
The squad from Kempten can again rely on strong partners in the second season. In addition to LGT, the Volkswagen logo will be new on the ABT Schaeffler FE01 too. The brand’s involvement is that of a strategic partner. ABT and Volkswagen have enjoyed a long-standing and successful partnership. While the automotive group and the Liechtenstein financial services provider are new on board and Schaeffler, in addition to its sponsorship, is now a technology partner as well, the team can continue to count on all the major partners from the inaugural season. Deutsche Post and DHL, like last year, are sharing the front and rear wings, plus the sidepods, of the cars driven by Daniel Abt and Lucas di Grassi. Würth Elektronik continues to be on board, as well as the Warsteiner Brewery and the German Football Cup winner VfL Wolfsburg. All team members are wearing sunglasses of the TITANflex brand.

“Initially, Formula E was a big adventure for all of our partners which no-one was able to gauge in detail. Still, all of them supported us from day one – and we owe them a big debt of gratitude for this”, says ABT’s Head of Marketing Harry Unflath. “By now all partners have become great Formula E fans and we’re jointly looking forward to a new season with a wealth of new ideas and activities. I’m proud that in Volkswagen and LGT we managed to gain two new strong partners.”

This is how the FanBoost works
This season fans will find it even easier than before to give their favourite drivers a FanBoost. A post on Instagram or Twitter with the keywords #FanBoost and #DanielAbt or #LucasdiGrassi is all it takes and will automatically be counted as a vote. Voting on the fanboost.fiaformulae.com site continues to be possible as well. As a new feature, votes can be submitted up to the sixth minute of the race. Consequently, the FanBoost can only be used in the second car following the pit stop. At that time 100 kilojoules of additional energy will be available, either for a higher instant boost or a lower one lasting for a longer period of time.